Travelling to Europe? If your flight is delayed or cancelled, you could get over $900 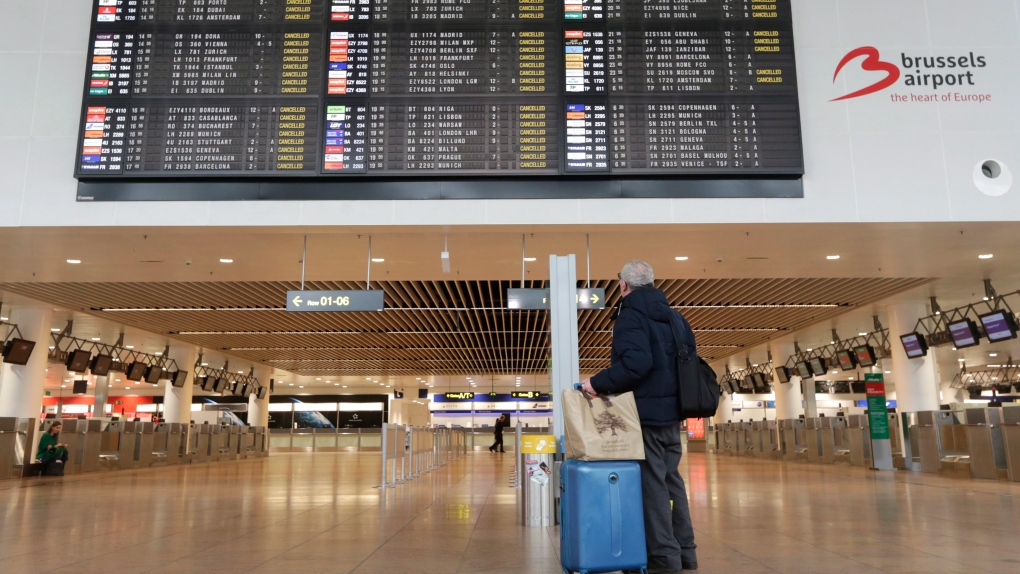 A man checks a flight information board as all flights are cancelled, during a nationwide general strike at Brussels airport, Monday, Dec. 15, 2014. (AP Photo/Yves Logghe)

Travelling to or from Europe? If your flight is cancelled or significantly delayed, you may be eligible to receive upwards of $900.

“I strongly suspect that not many Canadians will know about their entitlement under European law,” Coby Benson, a lawyer with the U.K.-based firm Bott and Co., told CTVNews.ca. “And that would be because the airlines aren’t doing enough to inform their passengers of their rights.”

EC 261, a regulation that was passed by the European Parliament in 2004, states that barring “extraordinary circumstances” such as extreme weather or a security incident, airline passengers are entitled to receive up to €600 (a little more than C$900) if they are denied boarding without reasonable grounds, their flight is delayed by more than three hours or their flight is cancelled with less than two weeks’ notice.

EC 261 covers all flights departing from European Union airports, regardless of an airline’s nationality, and all flights landing in the EU that are operated by an EU-based airline. Compensation can range from €250 to €600, depending on the distance of the flight, and people of all nationalities are eligible. Such passengers may also be entitled to receive additional money for expenses incurred because of a cancellation or delay.

Most passengers, however, never see the money that’s owed them.

AirHelp is a Berlin-headquartered company that processes passenger claims under EC 261.

“According to our numbers, we think only… about 10 per cent of people actually get paid,” Johnny Quach, the company’s vice president of product management, told CTVNews.ca.

According to AirHelp, in the first six months of 2018 alone, an estimated 30,000 Canadians were eligible to receive more than $30 million under EC 261 -- a 28 per cent increase over the same period in 2017. AirHelp also says that a staggering 44 per cent of eligible passengers never file a claim.

If you want to receive compensation under EC 261, it’s important that you keep your boarding pass, jot down your booking confirmation number and keep any receipts for expenses incurred because of an affected flight. You can file a claim directly with an airline, or you can seek out the services of a third party such as AirHelp or Bott and Co. (look around -- there are many others), which will take a cut out of a successful case.

“Of all the times we attempt to even contact airlines, close to half the time we’re getting a ‘no,’” Quach said. “Now what we typically do is we take it to the next level… (and) take these airlines to court in their local headquarters.”

“There are some airlines that will just try to wriggle their way out of as many claims as possible,” Benson, who specializes in cases involving EC 261, added. “The only reason that a law firm like ours has a department that deals with this is because for years now, the airlines have been making difficult for passengers to claim.”

The good news for Canadian travellers is that the three major Canadian airlines that service Europe -- Air Canada, WestJet and Air Transat -- outperform many major European airlines when it comes to processing claims under EC 261, according to AirHelp data. But that data also shows that the on-time performance of most major Canadian airports lag far behind many in Europe, with Toronto’s Pearson International Airport being amongst worst.

In Canada, sweeping new transport legislation was enacted in May.

“The Liberal government passed Bill C-49, which creates a framework for some kind of passenger protection which is going to make things worse for Canadians, actually,” Lukacs claimed. “Under the Canadian regulation… passengers will not be eligible to compensation if the airline delays or cancels a flight due to so-called ‘safety reasons.’”

That means, for example, that a flight delayed in Canada for a mechanical problem would be ineligible for passenger compensation whereas the same issue in Europe would see passengers protected under EC 261.

“What the Canadian government does is pay lip service to passenger rights, but in reality, passengers will get preciously little,” Lukacs said. “It’s a dog and pony show.”

In the past, Transportation Minister Marc Garneau has said that Bill C-49 would ensure faster and simpler complaint mechanisms for airline passengers and lower the cost of flying while expanding air service in Canada.

The full rules for passenger rights in Canada have yet to be written. The Canadian Transportation Agency is currently seeking public input on the matter.