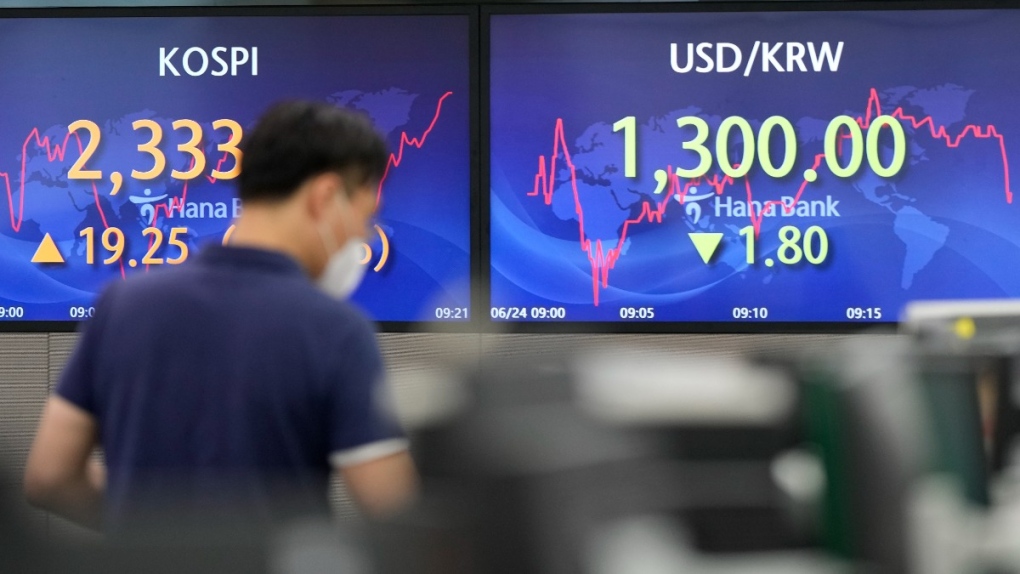 Stocks are rallying again on Friday, and Wall Street is heading for just its second winning week in the last 12 to provide a bit of relief from its brutal sell-off this year.

The S&P 500 was 2.3% higher in midday trading. It's on pace for a 5.7% gain for the week, though it's still close to 20% below its record set early this year and hasn't recouped its loss from the prior week, which was its worst since the early 2020 coronavirus crash.

Stocks have climbed this week as pressure from rising Treasury yields lets up somewhat and investors speculate the U.S. Federal Reserve may not have to be as aggressive about raising interest rates as earlier thought.

It's a reprieve from Wall Street's tumble through most of the year, caused by the Fed's and other central banks' slamming into reverse on the tremendous support fed into markets through the pandemic. In hopes of beating down punishingly high inflation, central banks have raised interest rates and made other moves that hurt prices for investments and threaten to slow the economy enough to cause a recession. More such moves are sure to come.

Parts of the U.S. economy are still red-hot, particularly the jobs market, but some discouraging signals have emerged recently. A report on Friday confirmed sentiment among consumers sank to its lowest point since the University of Michigan began keeping records, hurt in particular by high inflation. Another lowlight this week suggested the U.S. manufacturing and services sectors aren't as strong as economists thought.

Such weakening data raise worries about the strength of the economy. But they also can be good for financial markets, as paradoxical as that may seem.

They could mean less upward pressure on inflation, which would ultimately mean the Federal Reserve doesn't have to raise rates so aggressively. And interest rates drive trading for everything from stocks to cryptocurrencies.

One nugget in the consumer sentiment report could carry particular weight for markets. It showed consumers' expectations for inflation over the long run moderated to 3.1% from a mid-month reading of 3.3%. That's crucial for the Fed because expectations for higher inflation in the future can trigger buying activity that inflames inflation further in a self-fulfilling, vicious cycle.

Last week, the Fed hiked its key short-term rate by the biggest margin in decades and said another such increases could be coming, though they wouldn't be common.

Over the last week, investors have been modestly ratcheting back their expectations for how high the Fed will hike interest rates into early next year.

That's helped yields in the Treasury market recede. The yield on the two-year Treasury, which tends to move with expectations for the Fed's actions, has dropped back to 3.05% from more than 3.40% in the middle of last week.

The yield on the 10-year Treasury, which forms the bedrock for the world's financial system, rose to 3.12% on Friday from 3.07% late Thursday. But it also has moderated after hitting 3.48% last week.

A separate economic report on Friday showed sales of new homes unexpectedly accelerated last month. But the trend for housing has largely been lower because it's at the leading edge of the Fed's hikes.

Rising mortgage rates pushed LendingTree, the online marketplace that helps people find mortgages and other loans, to warn Friday that it expects to report weaker revenue for the second quarter than earlier forecast. Its stock fell 8.8%.

The vast majority of Wall Street was heading the opposite direction. More than 90% of the stocks in the S&P 500 were rising.

Cruise operator Carnival was close to the front of the pack, steaming nearly 11% higher. It reported weaker results for its most recent quarter than analysts expected, but it also said that booking trends are improving.

FedEx rose 7% after giving a forecast for earnings this upcoming fiscal year that topped some analysts' expectations.

Other markets around the world also rallied Friday.

Tokyo's Nikkei 225 added 1.2% as a report showed inflation in Japan remained at 2.1% in May. After stripping out costs for energy and fresh food, though, underlying inflation remained at 0.8%. And Japan's central bank is unlikely to follow the example of the Fed and other central banks in raising interest rates, analysts said.

Groceries are putting a big strain on Canadian young professionals' pocketbooks, especially those who are out of the nest and paying rent.