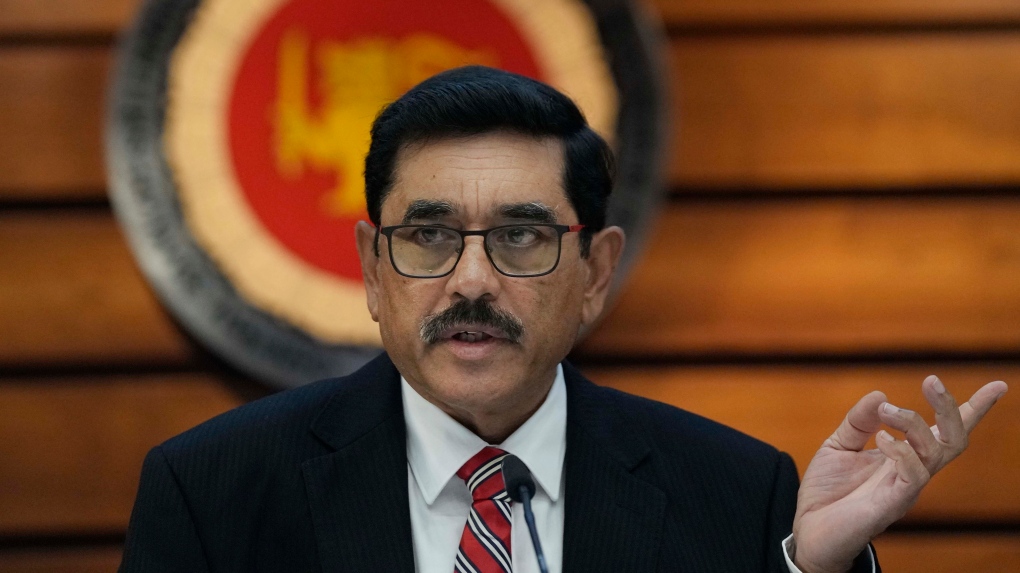 Sri Lanka's central bank chief said Thursday he hopes the government can reach a preliminary agreement that could lead to a bailout package with the International Monetary Fund when its officials visit the crisis-hit island nation later this month.

The Indian Ocean country is effectively bankrupt and its economic crisis set off massive public protests that led to the ouster of President Gotabaya Rajapaksa last month. The government has said the crisis has made the negotiations with the IMF difficult.

Nandalal Weerasinghe, the governor of Sri Lanka's central bank, said he hoped IMF officials and Sri Lanka's government could "finalize and reach a staff-level agreement" on the policy package during their meetings.

Sri Lanka announced in April that it is suspending repayment of foreign loans. Its total foreign debt is $51 billion, of which it must pay $28 billion by 2027. The country has said it needs to restructure all of its debt.

Weerasinghe told reporters Thursday that the agreement being sought with the IMF would give them "a clear picture on debt sustainability and debt targets for us to achieve in the next 10 years."

Once an agreement is reached, Weerasinghe said, Sri Lanka would approach sovereign bond holders and other external creditors.

"We hope all our creditors will support Sri Lanka once they see the strong macro program endorsed by the IMF," he said.

Sri Lanka's new President Ranil Wickremesinghe said two weeks ago that his government had initiated negotiations with the IMF on a four-year rescue plan and had commenced the finalization of a debt restructuring plan.

However, Wickremesinghe also said negotiations with the IMF have been difficult because of Sri Lanka's bankruptcy and that an expected early August target for an agreement with the agency was not possible. It is now expected in September.

Wickremesinghe was elected last month to complete the rest of Rajapaksa's five-year term, which ends in 2024. Rajapaksa resigned in exile and is now in Thailand.

The protesters blamed Rajapakasa and his powerful family for years of mismanagement and corruption that have bankrupted the nation and led to unprecedented shortages of essential imports like fuel, medicine and cooking gas.

Wickremesinghe's government is preparing a national policy roadmap for the next 25 years that aims to cut public debt and turn the country into a competitive export economy.

Wickremesinghe has stressed that Sri Lanka needs long-term solutions and a strong foundation to stop a recurrence of economic crises.

Two weeks ago, he said the hardships had eased somewhat with reduced power cuts, fertilizers being brought in for cultivation and cooking gas distribution improving.

But many people complain that price hikes of most essential items are unbearable.

Prices of most essentials have tripled in recent months and most people are struggling to pay for basic needs. About 70% of Sri Lankan households surveyed by UNICEF in May reported cutting back on food consumption. Many families rely on government rice handouts and charitable donations.

Separately Thursday, police fired tear gas and used water canons to disperse university students who were walking in a protest march in the capital Colombo, demanding that Wickremesinghe resign. Local television channels showed police arresting some of the protesters.

Protestors accused Wickremesinghe of being a surrogate of Rajapaksa and trying to suppress the rights of the people to protest.

They paraded along the main roads in the Colombo, shouting slogans and displaying banners that read "Go Ranil Go, get lost with ALL Rajapaksas," "Stop Suppression and "Release all the arrested protestors."

Since his election, Wickremesinghe has authorized the military and police to violently dismantle protest camps in Colombo and arrest those they identified to have trespassed in the president's official residence and other state buildings.

However, Wickremesinghe has said that although the protests started peacefully, groups with political interests took over later and became violent, citing the burning of dozens of ruling party politicians' homes in May.