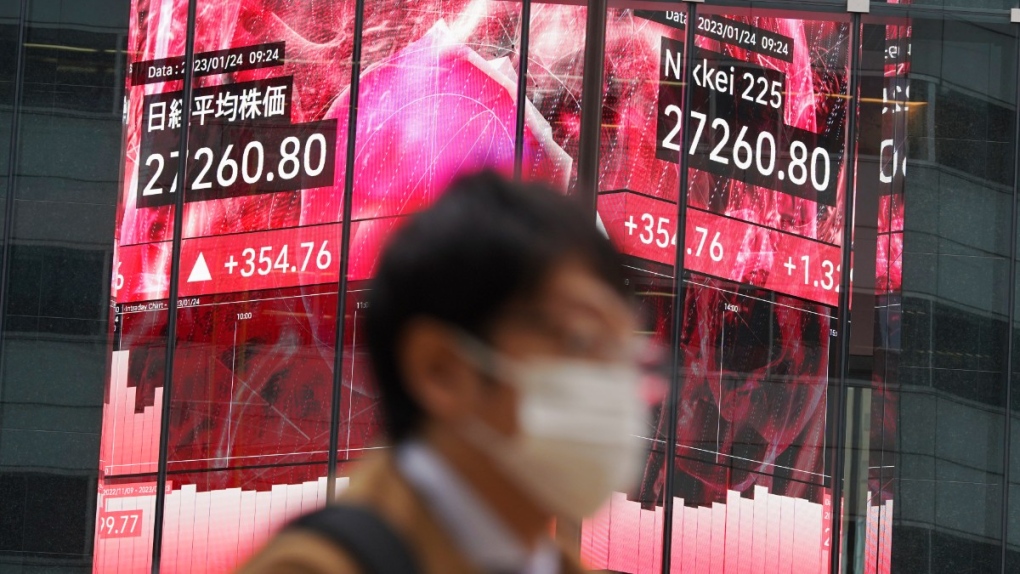 A person walks in front of an electronic stock board showing Japan's Nikkei 225 index at a securities firm, Jan. 24, 2023, in Tokyo. (AP Photo/Eugene Hoshiko)
TORONTO -

Canada's main stock index was largely unchanged Tuesday as weakness in energy was offset by gains in telecom and industrials, while U.S. markets were mixed.

The Bank of Canada is widely expected to announce a quarter of a percentage point hike Wednesday and then pause, while the Federal Reserve is also expected to be near the end of its cycle.

"Certainly, the tone is changing," said Burkett. "And that's what's driven markets higher in the first few weeks of this year."

He also expects the commentary from central banks will begin to shift, with the Fed tempering some of the inflation-fighting rhetoric that defined its position last year.

U.S. earnings continued to roll in on Tuesday, with some firms missing estimates.

Markets are anticipatory, so while earnings last year were good even as markets declined, now the decline is beginning to show in company results, said Burkett. He expects this will continue as earnings begin to reflect interest rate hikes and their effects on different parts of the economy, and added that results this year are likely to diverge significantly between companies and sectors.

The Canadian dollar traded for 74.79 cents US compared with 74.73 cents US on Monday.

Energy weighed on the TSX Tuesday, with the energy index down more than one per cent. The price of oil was down on continued uncertainty regarding future demand from China amid its rocky reopening, said Burkett.

Oil prices were rising late last year because of optimism over a possible recovery and subsequent uptick in demand from China, said Burkett, as well as over the constraint of Russian supply.

But “neither of those things have delivered in a way that would send oil prices higher,” he said.

This report by The Canadian Press was first published Jan. 24, 2023.