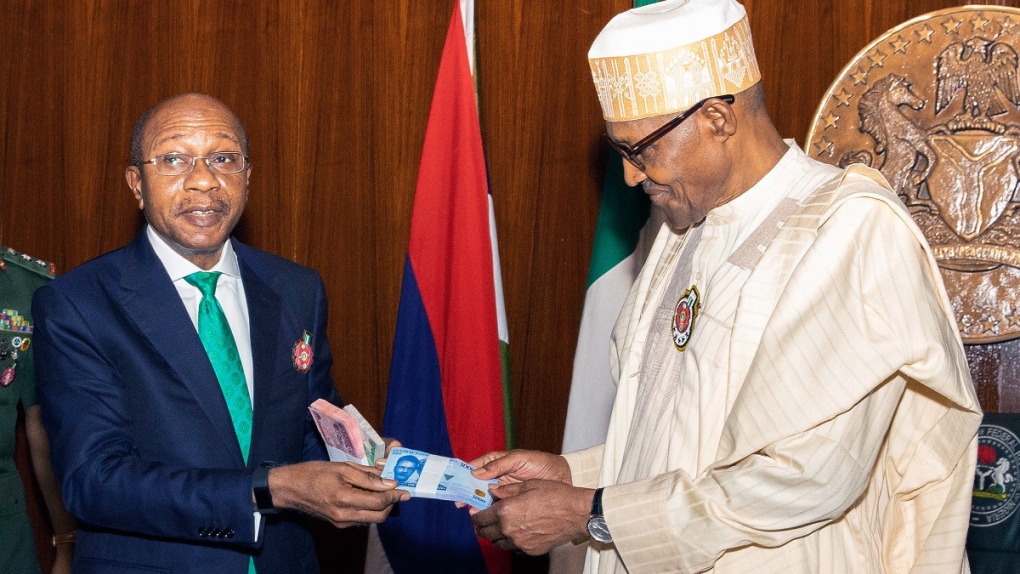 Experts, however, are skeptical about such results in a country that has battled chronic corruption for decades, with government officials known to loot public funds that has caused more hardship for the many struggling with poverty.

Nigeria's currency has not been redesigned in 19 years, and the new initiative is the latest introduced by policymakers in Africa's biggest economy in their quest for a cashless and more inclusive economy.

The naira is "long overdue for a new look," Nigerian President Muhammadu Buhari said at the launch. The new paper notes designed in Nigeria and featuring enhanced security "will help the central bank to design and implement better monetary policy objectives."

More than 80 per cent of the 3.2 trillion naira ($7.2 billion) in circulation in Nigeria are outside the vaults of commercial banks and in private hands, Emefiele said. Regulators last month announced a Jan. 31 deadline for old notes to either be used or deposited at banks.

With inflation at a 17-year high of 21.09 per cent that is driven by soaring food prices, Emefiele said the new notes "will bring the hoarded currencies back into the banking system" and help the central bank regain control of the money being used in the country.

"The currency redesign will also assist in the fight against corruption as the exercise will reign in the higher denomination used for corruption and the movement of such funds from the banking system could be tracked easily," the central bank chief said.

Analysts, however, say that the newly designed notes would yield little or no results in managing inflation or in the fight against corruption in the absence of institutional reforms.

Bakare said the move by Nigeria's central bank is at best an "expensive process that will cost the public a lot of pain because of the short period" required to either use or deposit cash in circulation.

At least 133 million people, or 63 per cent of Nigeria's citizens, are multidimensionally poor, according to government statistics.

"It could potentially slow down the economy if people do not have cash and people cannot exchange their cash for new notes at a fast pace," he said. "You can't phase out cash without fixing financial inclusion or electronic payment and even at that."