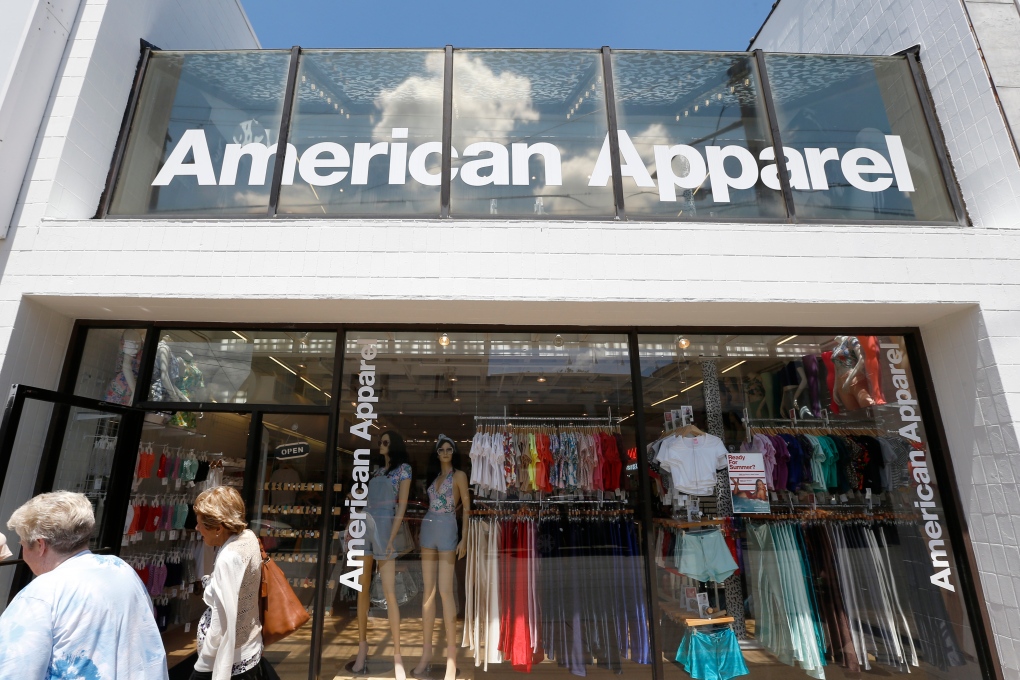 In this Wednesday, July 9, 2014, file photo, passers-by walk in front of the American Apparel store in the Shadyside neighborhood of Pittsburgh. (AP /Keith Srakocic, File)

MONTREAL -- Gildan Activewear has won an auction to buy bankrupt clothing company American Apparel for US$88 million, some US$22 million more than a stalking horse offer it made in November.

The deal announced Tuesday will see it acquire American Apparel's intellectual property rights and some manufacturing equipment from the L.A. facilities, but not the leases for the manufacturing or distribution centres.

It also doesn't include American Apparel's stores and e-commerce site, which will continue to have access to a limited licence for 100 days.

Founded by Quebec native Dov Charney in 1989, American Apparel rose to prominence after opening manufacturing facilities in Los Angeles and attracting a young clientele with the adoption of sexually provocative advertising.

However, it entered bankruptcy protection twice, in Oct. 2015 and then Nov. 2016, shortly after Charney was fired in 2014 for allegedly violating its sexual harassment policy, something he denied and described as a "coup."

The Quebec-based company (TSX:GIL) has yet to decide whether American Apparel products will continue to be made in the United States, but Gildan spokesman Garry Bell said the brand is known for more than its U.S. manufacturing.

"It's still a brand that holds a lot of cachet," he said in an interview, acknowledging that it has been tarnished by two bankruptcies within a year.

Bell said Gildan can maintain the relevance and separate identity of the American Apparel brand as it has done in the past with acquisitions of Anvil, Comfort Colors and Gold Toe.

"The brand stands for something and I think it would be misplaced for us to try and not continue the areas of focus that really built this brand's strength."

The acquisition is subject to court approval scheduled for Thursday and is expected to close early next month.

Further details about the integration are to be discussed Feb. 23 when Gildan issues its full-year financial report.

Industry analysts believe American Apparel, whose annual wholesale sales were estimated at about US$150 million in 2016, will expand Gildan's position by offering a premium product in the fashion basics market.

The company increased its bid after facing competition from rivals which Bell said would be disclosed in the coming days through the Delaware Bankruptcy Court.

Gildan makes and distributes T-shirts, underwear, socks and other clothing under various labels including Gildan. Most of its operations and employees are located in the Caribbean, Central America and Bangladesh. However, it has yarn-spinning and distribution centres in the southern U.S.