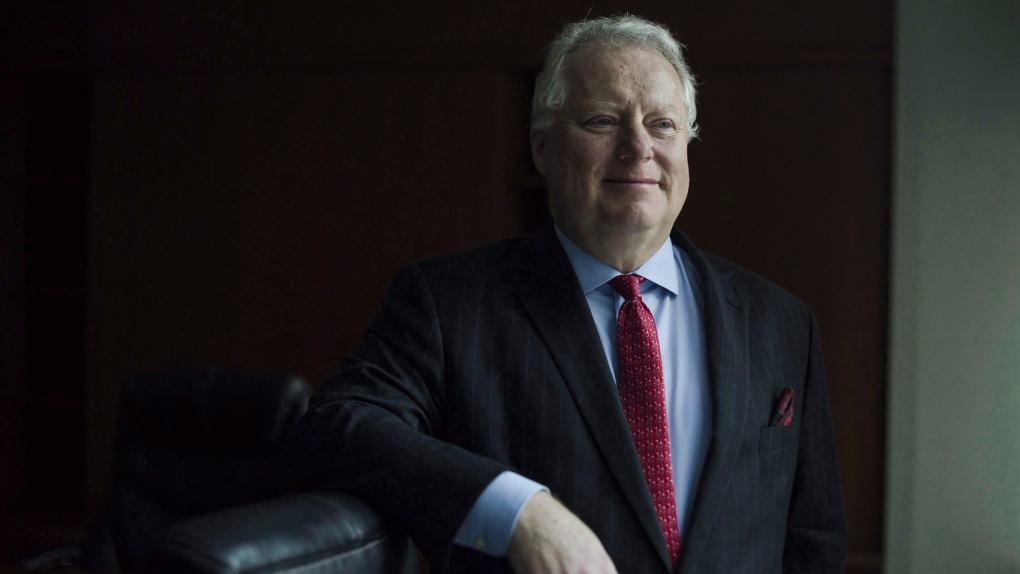 Richard Carleton, CEO of the Canadian Securities Exchange poses for a portrait in Toronto, Wednesday, January 3, 2018. (THE CANADIAN PRESS/Christopher Katsarov)

TORONTO -- The Canadian Securities Exchange is planning to launch a blockchain-powered platform to clear and settle securities trades, challenging the monopoly long held by TMX Group Inc. and its own ambitions with the technology.

This new clearing house, which requires approval from Canadian regulators, would allow companies to issue conventional equity and debt using a digital token representing a share in a business, also known as a tokenized security.

The CSE said using blockchain, best known for powering the underlying technology behind Bitcoin, will allow securities trades to be confirmed in real-time rather than two full business days for settlement under conventional systems, and reduce errors.

"We have the opportunity here to start from scratch with issuers that are prepared to basically bypass the traditional paper-stock-certificate system and move to these equity securities tokens," he said in an interview.

This clearing house, if approved, would serve as a rival to Canadian Depository for Securities Ltd., which has long served as the country's main securities and fixed income clearing and settlement hub.

CDS is owned by the TMX Group, Canada's biggest exchange operator that operates both the Toronto Stock Exchange and the TSX Venture.

In October, the TMX Group announced it was collaborating with the Bank of Canada and Payments Canada to experiment with using blockchain technology to automate the securities settlement process. This project to develop a proof of concept for clearing and settling securities marked the third phase of the Canadian central bank's Project Jasper looking at how digital ledger technology could transform payments in Canada.

The prototype for a digital ledger-based clearing system is in the process of being built, and testing could begin as early as the second quarter, said John Lee, TMX's managing director of enterprise innovation product development.

"It would change the model completely, because it would allow you to immediately settle securities against a cash lag, almost instantaneously," he said.

Once testing is complete, the TMX group will decide to move forward based on whether the potential benefits of using a blockchain-based system outweigh the drawbacks, he added.

"We want to look at the technical merits of how this could actually function and operate," said Lee. He noted that the existing CDS system is capable of doing real-time settlements, but speeding up the overall process for other players in the capital markets ecosystem such as regulators is difficult.

The CSE's announcement also comes less than a week after the CDS said it would not ban the clearing of securities of marijuana companies with activity in the U.S. -- where cannabis is legal in some states but remains illegal under federal law -- and rely on exchanges to review the conduct of listed issuers.

CDS's announcement and a separate statement from the umbrella organization brought clarity months after it was first reported that the TMX was considering such a ban.

The CDS's clarification was particularly relevant for the CSE, which has benefited from a surge of cannabis-related listings. Marijuana companies have largely dealt with the hazy legality by listing on the smaller, less risk averse exchange.

Carleton said the CSE expects to be the first recognized exchange in Canada to introduce a fully-developed blockchain platform for trading, clearing and settling tokenized securities. It has licensed the technology from New York-based Fundamental Interactions Inc.

Carleton added the CSE will be submitting an application in conjunction with its blockchain-powered clearing house to the applicable provincial securities commissions across the country.

One of the questions that needs to be addressed, in conjunction with regulators and industry, is whether issuers on other exchanges would be able to use the CSE's blockchain-powered clearing house, he said.

"Certainly, that is a place that we want to get to," he said.

He noted that it will be a "material effort" for older established companies that have long used the traditional paper stock certificate system to convert to a modern platform.

"This is the direction that clearing is going to take around the world," he said. "But, the first takeup will be from new issuers."

Through the CSE's new platform, securities would be offered to investors through tokenized securities.

The CSE has already signed a memorandum of understanding with Vancouver-based 3D printing firm Kabuni Technologies, which plans to file a prospectus with the British Columbia Securities Commission to issue tokenized securities to investors.

A blockchain-based clearing system has the potential to be more efficient, and lower costs for both issuers and investors, said Frank Allen, the executive director of the Canadian Foundation for Advancement of Investment Rights.

Shortening the time it takes to confirm a transaction would also reduce the risk of it falling through, he added.

"The use of blockchain for clearing systems represents an opportunity for an enhancement of the services, the lowering of costs, and benefiting the marketplace in general," said Allen.