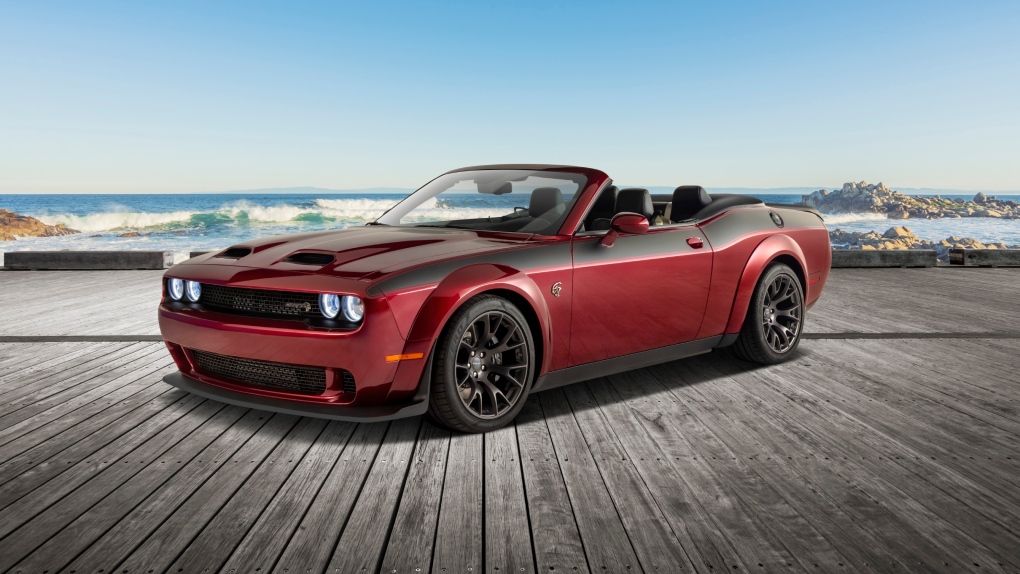 Customers will be able to order Challenger convertibles with custom conversion work done by Drop Top Customs of Florida. Any version of the Challenger can be made into a convertible. (JRT Agency/CNN)

The modern Dodge Challenger muscle car and the closely related Dodge Charger four-door sedan are ending their long production runs next year. But Dodge, Stellantis's American performance car brand, has a few special items in store to mark the occasion as those models rumble off into the sunset.

Both the Challenger and the Charger are being phased out after the upcoming model year as Dodge prepares to sell electric cars in the future.

Until now, if you wanted a convertible Dodge Challenge you had to find a custom shop to do the work of removing the roof and the additional work on the car's body and frame. Now, Dodge is streamlining the process. Dodge Challengers still won't be built as convertibles at the Ontario, Canada, factory where the cars — along with Chargers and Chrysler 300 sedans — are made. Instead, Dodge has contracted with a Florida car customizing shop called Drop Top Customs to turn the hardtop coupes into convertibles.

Despite its similarities to the Mustang and Camaro, the Challenger is a bigger, heavier car. It's about 10 inches longer than a Ford Mustang. The Challenger shares much of its basic engineering with the Charger and Chrysler 300 four-door sedans.

Making a hardtop car into a convertible involves much more than just cutting off the roof. In most modern cars, the roof provides some of the structural rigidity that keeps the vehicle's body from flexing and bending over bumps and during turns. When the roof is removed, additional bracing has to be provided in the rest of the body to prevent that unwanted twisting. Jeff Moran of Drop Top Customs said the company has been working with Dodge to make convertibles since 2008, but the new dealer-ordering process streamlines the purchase. The company can make up to 5,000 convertibles each year, said Moran.

These convertibles will not be cheap. The suggested price of the conversion work is about US$26,000. Prices for a base-model Dodge Challenger coupe with a V6 engine start about $30,000. V8-powered Challengers start at about $38,000. That means even the least expensive Challenger convertible will cost about as much as a Mercedes-Benz C-class convertible or $20,000 more than a convertible Ford Mustang which, comparing base models, produces similar horsepower. For the extra money, though, the Challenger buyer will have a car that is, at least, a far less common sight on the road.

In addition to the convertible conversions, Dodge will also make a series of "Last Call" special edition Charger and Challenger models available. Details on those cars will be revealed later. Also, Dodge will bring back the 710-horsepower Durango Hellcat high-performance SUV that had been offered for the 2021 model year but that Dodge had said would not be offered again after that.

Dodge, along with Chrysler and Jeep, is one of the 14 car brands operated by Stellantis, the company that formed when Fiat Chrysler Automobiles merged with France's PSA in 2021.