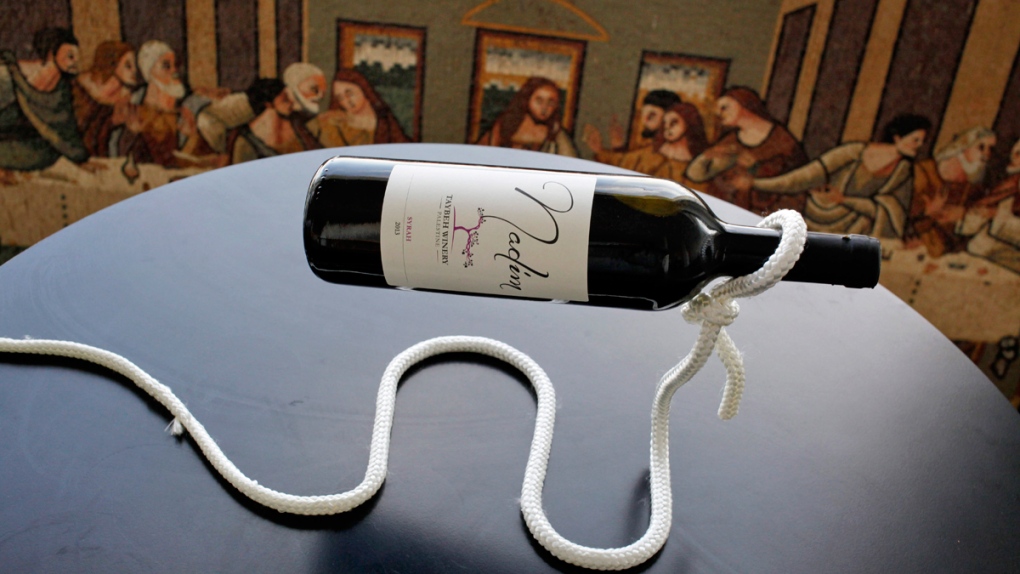 In this Tuesday, Oct. 28, 2014, a wine bottle is seen at Palestinian Taybeh winery in Taybeh, West Bank. (AP / Nasser Shiyoukhi)

TAYBEH, West Bank -- A tiny Christian enclave in the overwhelmingly Muslim West Bank has for years crafted the only Palestinian beer and brought thousands of visitors flocking to its annual beer fest. Now, it is adding wine to its list of libations, hoping a boutique winery will be another tourist draw and contribute to keeping the small village afloat.

While Christians around the Middle East have seen their numbers dwindle due to conflict and the lure of better economic opportunities abroad, Taybeh has remained an exclusively Christian village, the last in the West Bank.

The family behind the wine and beer says they are carrying out "peaceful resistance" by investing in their homeland and staying put.

"This is how we believe the state of Palestine can be built: by people like us to invest in the country and encourage other Palestinians to come and invest in their country," said Nadim Khoury, who founded the brewery and winery.

Taybeh, home to some 1,400 people, has put itself on the map because of its eponymous beer, which is sold around the world. Israelis, far from the checkpoints that divide them from the West Bank, also can be found sipping the honey-hued Palestinian draught.

Despite the West Bank's majority Muslim population, which often shuns alcohol for religious reasons, Taybeh's annual Oktoberfest, first held in 2005, has ballooned into one of the region's must-see events, hosting diplomats, aid workers, journalists and local, mostly Christian Palestinians. The two-day festival has drawn some 16,000 people.

The festival has morphed over recent years to include the sale of local products like honey, olive oil and colorful embroidery. Organizers say that approach gave vendors a much needed boost in sales. The summertime Gaza war prompted organizers to cancel the event this year, saying the tense atmosphere was an inappropriate time for a jubilant beer festival.

Khoury said a winery was the natural next step in his business' expansion, especially since the family has been making its own wine at home for decades.

The wine, named Nadim, which means "drinking buddy" in Arabic, is produced in an expansive room, with gleaming stainless steel equipment and oak barrels flown in from Europe. Seeing opportunity in the droves of tourists drawn to the beer festival, Khoury also built an 80-room boutique hotel on top of the winery. Beginning next year, visitors can drink the locally produced wine and then stagger up to their sleekly-decorated rooms overlooking rolling West Bank hills speckled with olive trees.

Khoury and his son, Canaan, who runs the winery, worked last year with an Italian winemaker to produce the first batch, made from merlot, syrah and cabernet varieties. The wine label will be launched at the end of November.

The economic development presents a rare bright spot for Christians, who now make up only about 2 per cent of the population of the Holy Land. Some 38,000 Palestinian Christians live in the West Bank, among more than 2 million Muslims. An estimated 80 per cent of Christian Palestinians live abroad, according to the local Roman Catholic church.

Christian-Muslim relations in the Palestinian territories are far better than in many other parts of the Middle East, and communal violence is extremely rare. But Christians in the Holy Land say they suffer from Israeli restrictions and have expressed concern over the rise of political Islam across the region.

Taybeh has remained entirely Christian, said David Khoury, Nadim's brother and a former mayor, because residents refrain from selling their land to non-Christians if they leave. The brothers say they have not faced antagonism from Muslims over their products, and have offered up a non-alcoholic beer for teetotallers as well.

Politics also has seeped into the wine business.

A West Bank winery run by monks is at risk because of Israel's separation barrier, which may cut off farmers from their vineyards. Canaan Khoury also said he wants indigenous Palestinian grape varieties to be recognized as such internationally and not have the names appropriated by Israeli vintners. Israel already has a globally lauded wine-making industry.

"We felt the need to establish a winery in Palestine," said Canaan Khoury, a 23-year-old Harvard graduate.

The Khourys say they plan to remain in their ancestral village, despite the difficulties of doing business under Israeli restrictions. Nadim Khoury said his shipments, including his wine-making equipment, have been delayed because of Israeli checkpoint inspections.

Taybeh Mayor Nadim Barakat said the winery, hotel and the beer festival are what's needed to boost the village's economy and perhaps keep Christians from leaving.

"The economy is the major point and nothing else," he said. "We have to improve the economy in Taybeh so that people will not go, will not migrate. This is the only thing we can do."