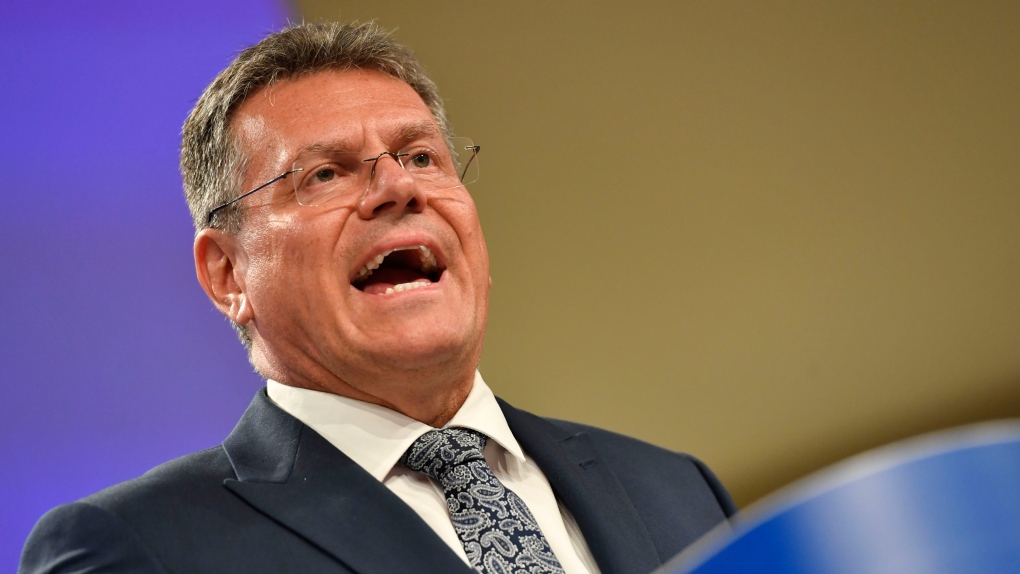 Britain is ramping up a feud with the European Union by pressing on with a plan to rip up parts of the post-Brexit trade deal it signed with the bloc.

Legislation that rewrites trade rules for Northern Ireland is scheduled to get its first major House of Commons debate on Monday, the first step on what could be a rocky journey through Parliament.

The legislation, if approved by lawmakers, would remove checks on goods entering Northern Ireland from the rest of the U.K., thereby scrapping parts of a trade treaty that Prime Minister Boris Johnson signed before Britain left the EU in 2020.

Johnson said he thought the plan could be approved "fairly rapidly" if Parliament co-operates, and that the measures could become law by the end of the year.

"What we are trying to do is fix something that I think is very important to our country, which is the balance of the Belfast/Good Friday Agreement," Johnson told reporters at the Group of Seven summit in Germany.

The British government says the rules are burdening businesses and undermining peace in Northern Ireland. It argues the unilateral move is justified under international law because of the "genuinely exceptional situation."

Johnson's opponents, however, say the move is illegal and will shred Britain's international reputation. It is also causing concern among some of the prime minister's fellow Conservatives, already worried about Johnson's judgment -- and popularity -- following a series of ethics scandals and two special election defeats.

But Johnson said Monday that questions about his leadership were no longer relevant.

"We settled that a couple of weeks ago," he told reporters in Germany, referring to his survival in a no-confidence vote three weeks ago.

The EU has threatened to retaliate against the U.K. if it goes ahead with its plan to rewrite the rules of the post-Brexit deal, raising the spectre of a trade war between the two major economic partners.

Irish foreign affairs minister Simon Coveney said he was "hugely disappointed" that the U.K. government is still pursuing its "unlawful" approach to the Northern Ireland Protocol.

"This is not the way to find sustainable solutions to the genuine concerns of people and business in Northern Ireland and only adds to uncertainty," he said.

"It is a treaty that we signed, ratified and even went through a general election in this country," he told Times Radio.

Northern Ireland is the only part of the U.K. that shares a border with an EU country, Ireland. When Britain left the European Union and its borderless free-trade zone, the two sides agreed to keep the Irish land border free of customs posts and other checks because an open border is a key pillar of the peace process that ended decades of violence in Northern Ireland.

Instead, to protect the EU's single market, there are checks on some goods, such as meat and eggs, entering Northern Ireland from the rest of the U.K.

Johnson's Conservative government claims overzealous EU implementation means the rules are not working as expected and are causing a political crisis in Northern Ireland.

"You have got one tradition, one community, that feels that things really aren't working in a way that they like or understand -- you've got unnecessary barriers to trade between Great Britain and Northern Ireland," Johnson said.

"All we are saying is you can get rid of those whilst not in any way endangering the EU single market," he said.

British unionists there say the checks are fraying the bonds between Northern Ireland and the rest of the U.K., seen by some unionists as a threat to their British identity. Northern Ireland's main unionist party is blocking the formation of a new power-sharing government in Belfast, saying it won't take part until the Brexit trade rules are scrapped.

"I want to see the re-establishment of the Northern Ireland Assembly and the Executive, and the protocol is getting in the way of that," Lewis told Sky News. "We have got to resolve that. That's what this legislation will do.

"Ultimately, we want to do this by agreement with the EU," he added. "But to do that, they need to show some flexibility and actually come and negotiate in a flexible way."

Frank Griffiths contributed to this report

CRA says it has $1.4 billion in uncashed cheques sitting in its coffers

RCMP's use of spyware tools under scrutiny at parliamentary committee

Canada's privacy commissioner says the belated disclosure that RCMP has for years been using spyware capable of accessing cell phone and computer microphones, cameras and other data as part of major investigations, is a clear example of why Canada's Privacy Act needs updating.

Saskatoon woman who had been reported missing facing charges in U.S., Canada

EXPLAINED | What is a 'zombie fire?' Experts describe the cause and concerns

Authorities in the Northwest Territories are monitoring a large 'zombie fire' that flared back up following last wildfire season after smouldering underground during the winter months.

No damage reported after 4.6 magnitude earthquake off Vancouver Island

A 4.6 magnitude earthquake has struck off the coast of Vancouver Island.

Housing correction in Toronto could end up becoming 'one of the deepest of the past half a century,' RBC warns

A housing correction which has already led to four consecutive months of price declines in the previously overheated Greater Toronto Area market could end up becoming 'one of the deepest of the past half a century,' a new report from RBC warns.

The white father and son convicted of murder in Ahmaud Arbery's fatal shooting after they chased him through a Georgia neighbourhood were sentenced Monday to life in prison for committing a federal hate crime.