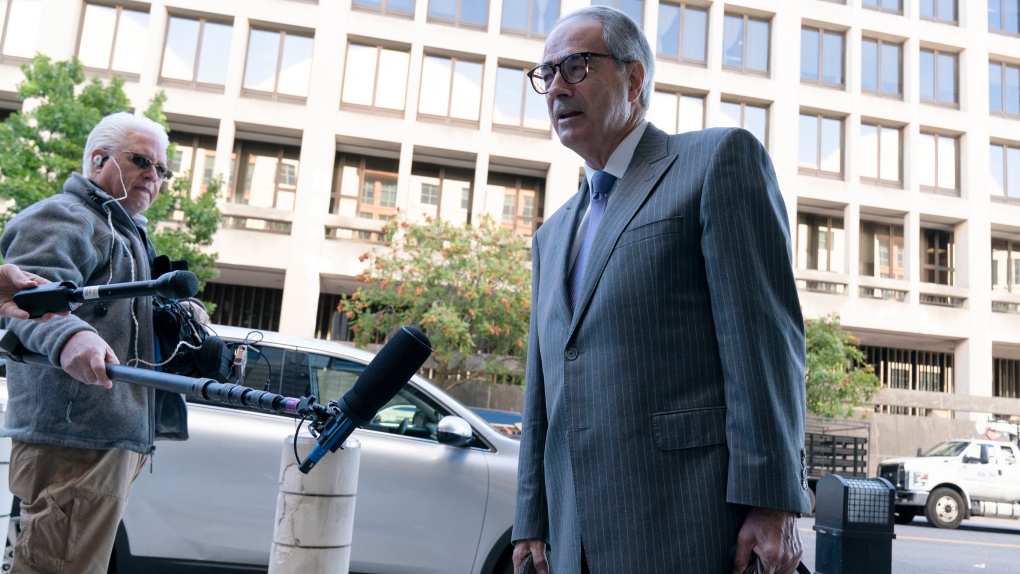 The defense team in the U.S. Capitol riot trial of the Oath Keepers leader is relying on an unusual strategy with Donald Trump at the center.

Lawyers for Stewart Rhodes, founder of the extremist group, are poised to argue that jurors cannot find him guilty of seditious conspiracy because all the actions he took before the siege on Jan. 6, 2021, were in preparation for orders he anticipated from the then-U.S. president -- orders that never came.

Rhodes and four associates are accused of plotting for weeks to stop the transfer of presidential power from the Republican incumbent to Democrat Joe Biden, culminating with Oath Keepers in battle gear storming the Capitol alongside hundreds of other Trump supporters.

Opening statements in the trial are set to begin Monday.

Rhodes intends to take the stand to argue he believed Trump was going to invoke the Insurrection Act to call up a militia to support him, his lawyers have said. Trump didn't do that, but Rhodes' team says that what prosecutors allege was an illegal conspiracy was "actually lobbying and preparation for the President to utilize" the law.

It's a novel legal argument in a trial that's one of the most serious cases coming out of the Capitol attack.

"This is an incredibly complicated defense of theory and I don't think that it's ever played out in this fashion in American jurisprudence," one of Rhodes' lawyers, James Lee Bright, told The Associated Press.

The Insurrection Act gives a president broad authority to call up the military and decide what shape that force will take. Trump did float that kind of action at other points in his presidency.

To succeed with this line of defense, Bright would have to convince a jury that Rhodes was waiting on the go-ahead from the president, which could be a major hurdle.

Rhodes' lawyers have argued Trump could have called up a militia in response to "what he perceived as a conspiracy to deprive a class of persons in several states of their voting rights." Rhodes published an open letter on the Oath Keepers' website in December 2020 urging Trump to use the Insurrection Act to "`stop the steal' and defeat the coup."

If Rhodes testifies, he could face intense questioning from prosecutors, who say his own words show the Oath Keepers would act no matter what Trump did.

Bright said Rhodes, a Yale Law School graduate, understands the risks of testifying but has insisted since the first day they met that he be able to "speak his piece."

Rhodes and his associates -- Kelly Meggs, Thomas Caldwell, Jessica Watkins and Kenneth Harrelson -- are the first Jan. 6 defendants to be tried on seditious conspiracy, a rarely used Civil War-era charge that can be difficult to prove.

The defense would have to convince the jury that the Oath Keepers really intended to defend the government, not use force against it, said David Alan Sklansky, a former federal prosecutor who's now a professor at Stanford Law School.

"If you think you are plotting to help protect the government, there is an argument that that means you don't have the required guilty mindset that's necessary in order to be guilty of seditious conspiracy," he said.

Court records show the Oath Keepers repeatedly warning of the prospect of violence if Biden were to become president. The Oath Keepers amassed weapons and stationed armed "quick reaction force" teams at a Virginia hotel in case they were needed, prosecutors say.

Among those likely to testify against Rhodes are three of his former followers, including one who has said Rhodes instructed them to be ready to use lethal force if necessary to keep Trump in the White House.

"The conditions would never be better. Yet, Rhodes and the others left the Capitol grounds and went to Olive Garden for dinner," they've written in court papers. Rhodes never went into the Capitol and has said that the Oath Keepers who did acted on their own.

The Insurrection Act is shorthand for a series of statutes that Congress passed between 1792 and 1871 defining when military force can be used in the United States by the federal government, said University of Texas law professor Stephen Vladeck. The Act does give the president wide discretion to decide when military force is necessary, and what qualifies as military force, Vladeck said.

The last time the Insurrection Act was used was in May of 1992, by President George H.W. Bush to call out the military to respond to Los Angeles riots after the acquittal of white police officers accused in the beating of Black motorist Rodney King.

Even if Trump had acted, prosecutors would still have a strong case that the Oath Keepers tried to keep Congress from carrying out its responsibilities as part of the transfer of presidential power, Vladeck said. Even if the president could authorize their actions, the Oath Keepers could still have been -- as the law puts it -- forcibly opposing other elements of the government, he said.

"The government of the United States is more than just the president," Vladeck said.

Michael Weinstein, a former Justice Department prosecutor, agreed that Rhodes' argument is not likely to win over a jury. But that may not be his only goal.

"I think it's going to be a little bit of a show trial for him," said Weinstein, now a criminal defense lawyer in New Jersey. "This is his opportunity to really promote himself and his philosophy and make himself out to be a bit of a martyr."

Trump did talk about sending in U.S. troops to American cities in summer 2020 as protesters filled the streets in the wake of George Floyd's death at the hands of a police officer, an action that would have come under the Insurrection Act. He never did.

"I think it's a great defense from the 1800s resurrected into 2022," she said. But she added: "If there's evidence that they would have done it anyway, then I think that really, really damages the defense."

Prosecutors have already pointed to a message from December 2020 that Rhodes wrote, saying Trump "needs to know that if he fails to act, then we will." Days before the riot, Rhodes warned that the "final nail" would be put in the "coffin of this Republic," unless they fought their way out.

"With Trump (preferably) or without him, we have no choice," Rhodes wrote in a chat, according to court papers. He added: "Be prepared for a major let down on the 6-8th. And get ready to do it OURSELVES."

This story has been corrected to show the Insurrection Act is shorthand for a series of statutes that Congress passed between 1792 and 1871, not 1872.