The Doomsday Clock reveals how close we are to...doom 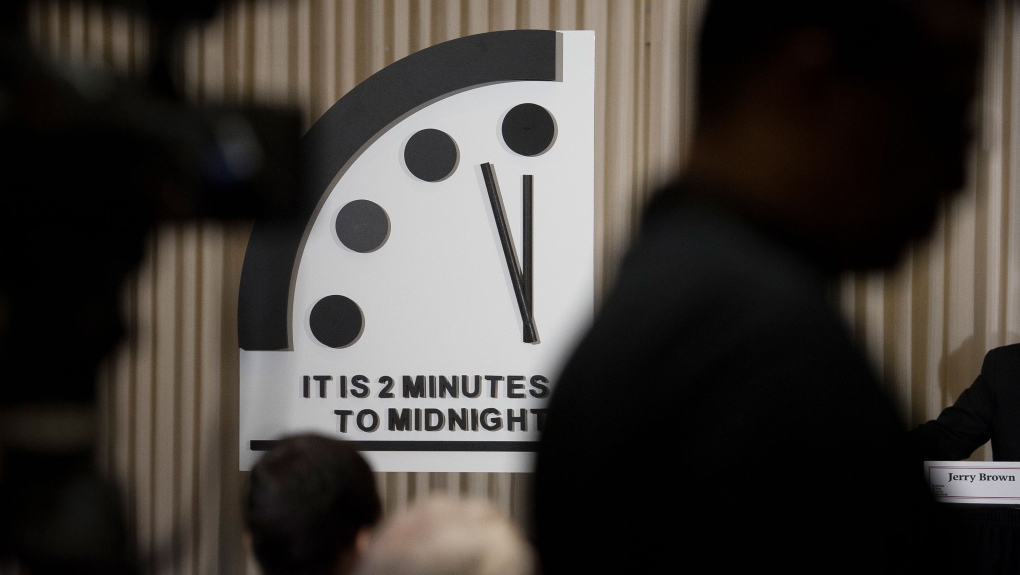 The Doomsday Clock has been ticking for exactly 75 years and the clock was set at 100 seconds until midnight -- the same time it has been since 2020. (Cliff Owen/AP)

The Doomsday Clock has been ticking for exactly 75 years. But it's no ordinary clock.

It attempts to gauge how close humanity is to destroying the world.

On Thursday, the clock was set at 100 seconds until midnight -- the same time it has been since 2020.

The clock isn't designed to definitively measure existential threats, but rather to spark conversations about difficult scientific topics such as climate change, according to the Bulletin of Atomic Scientists, which created the clock in 1947.

WHAT IS THE DOOMSDAY CLOCK?

The Bulletin of Atomic Scientists was a group of atomic scientists who worked on the Manhattan Project, the codename for the development of the atomic bomb during World War II.

Originally, it was conceived to measure nuclear threats, but in 2009 the Bulletin made the decision to include climate change in its calculations.

Over the last three-quarters of a century, the clock's time has changed according to how close the scientists believe the human race is to total destruction. Some years the time changes, and some years it doesn't.

The Doomsday Clock is set every year by the experts on the Bulletin's Science and Security Board in consultation with its Board of Sponsors, which includes 13 Nobel laureates.

Although the clock has been an effective wake-up call when it comes to reminding people about the cascading crises the planet is facing, some have questioned the 75-year-old clock's usefulness.

Lawrence Krauss, a former member of the Bulletin's board of sponsors, said though time has gone by since the clock first started, it's been difficult to take its results seriously since it's been ticking dangerously close to the end of civilization in the last few decades.

As a theoretical physicist, Krauss has been concerned about how the clock is now assessed and determined. Each year, he said, as the clock alarmingly nears midnight, scientists would have to gauge how much available "real estate" is left before deciding on how much further to move the clock.

"Now, it ticks in seconds; it used to be minutes," Krauss told CNN. "It is clearly not a quantifiable scientific assessment, more of a qualitative one. What has always been important is the movement of the clock, not its absolute value."

IT IS 100 SECONDS TO MIDNIGHT