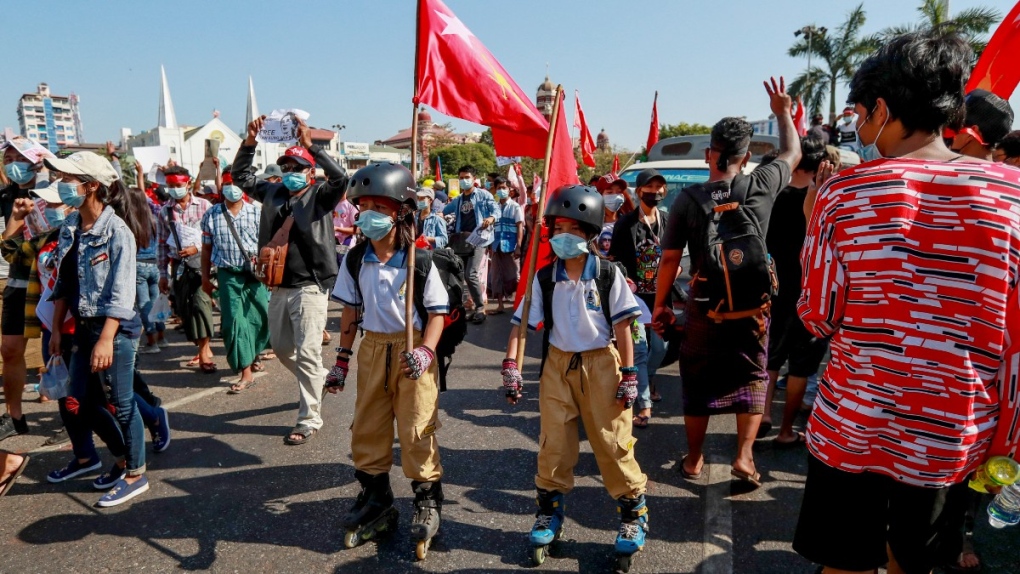 Children rollerskate with National League for Democracy party flags during a protest against the military coup in Yangon, Myanmar, on Feb. 10, 2021. (AP)

Hiding in the mosquito-infested jungles of Myanmar in a makeshift tent with her father, her young world has been torn apart.

"I want to sleep with mummy, but the police have taken her," she said in an audio clip recorded by her father, Soe Htay, on his phone and sent to CNN in early August.

Soe Htay was one of the early leaders of the pro-democracy movement against the military which overthrew Aung San Suu Kyi's elected government in a coup in February.

He says his family is now paying the price for his activism. His wife and teenage daughter remain behind bars, and his youngest daughter says she was forced into a half sitting, half standing pose during the 18 days she was in detention -- a stress position that the United Nations Committee Against Torture views as a form of torture.

The military has not responded to CNN's detailed emails and texts about the girl's detention and treatment.

But Soe Htay and his daughter are not alone.

In the months since the coup, the junta has waged a bloody campaign against its opponents, shooting dead protesters in the street and detaining thousands of doctors, activists, journalists, artists -- anyone it deems an enemy.

Sometimes, the junta isn't able to find its opponents. And increasingly, the military is going after another group of people to sow fear among the population and make them fall in line: the family members of dissidents, according to Tom Andrews, the UN special rapporteur on human rights in Myanmar.

"It's just horrific, it's horrific, it's outrageous, it's completely unacceptable and the international community should be up in arms," he said. "That's the brutal reality we're facing in this country and most importantly that the people of the Myanmar are facing."

CRACKING DOWN ON PROTESTS

In June, months after he had stopped protesting for fear of being shot by the military, soldiers came to his home in Myanmar's central Mogok city to arrest him, Soe Htay told CNN from his jungle hideout.

They raided his house four times, but he had already gone into hiding with his two sons, he said, leaving his immediate family behind.

On the final visit in June, they arrested his wife and two daughters instead.

"This is a hostage-arrest," he said. "Since they arrested my family when they couldn't arrest me ... my youngest daughter wasn't even 5 yet."

Su Htet Waing spent her fifth birthday in detention, said Soe Htay. She was let out on June 30 after 18 days as part of a mass prisoner release. Her mother and sister remain behind bars, sentenced to three years in prison, Soe Htay said. Local media reported the pair were charged with incitement -- a common punishment leveled at pro-democracy activists.

While Su Htet Waing was detained she was forced into the half-sitting, half-standing position, which caused her "mental trauma," said Soe Htay.

Andrews, the UN special rapporteur, said he has heard of many similar cases of children being brutally punished for the political views of their parents in the months since the military junta took control.

"The stress position is outrageous," he said.

"I have seen reports of children being beaten, reports of children, of iron rods burning their legs, I've seen them detained for several days ... I'm speechless and outraged and truly angry at what despicable behavior we're seeing."

Khaing Zin Thaw also tried to fight against the junta -- and like Soe Htay, it's her family that is paying the price.

The 21-year-old used her role as a social media influencer to raise money for the Civil Disobedience Movement, which saw thousands of people leave their jobs to destabilize the coup and economy. She helped collect donations for those who had lost their jobs and were struggling to get by. Khaing Zin Thaw also made posts supporting the movement on Facebook, where she has about 700,000 followers.

But that soon put her onto the radar of the military.

Shortly after February's coup, she left home for safety and has been moving constantly ever since within Myanmar. But in April she got an alarming phone call.

"One of my friends called me and told me there were military trucks outside my house. They called back half an hour later and said your parents have been arrested," she said.

Her parents have done nothing wrong, she said, her voice wavering. Her father does not even know how to use Facebook.

Her sister-in-law was also taken in her place, Khaing Zin Thaw said, but has since been released.

"I heard that my father has been tortured and has not asked for his medication ... sometimes, my mind goes blank and I feel like I am losing my mind," she said, adding that both her parents have been charged with incitement.

The military has not responded to CNN's detailed requests for comment.

At least 182 people, including children, have been detained in place of their family members since the coup -- and 141 of them remain in detention, according to advocacy group Assistance Association for Political Prisoners (AAPP).

The group characterizes these arrests as hostage taking, and stresses the military's actions are in violation of international law.

According to AAPP, when children are taken into detention, they are not sent to prisons, such as the notorious Insein where thousands of pro-democracy protesters are held.

Instead, they are sent to interrogation centres, police custody, military barracks or junta administration offices.

"The children who are detained as hostage are placed in the same cells as their family. But exact details inside detention are difficult to confirm," AAPP said in a written interview. "As far as we know, hostages are not being mixed with other pro-democracy detentions."

AAPP said because the junta is making this distinction, it "clearly understands what it is doing is hostage taking."

The group warns the practice is likely to increase.

Myanmar has been brought to the edge of collapse since the coup, with the junta waging a bloody campaign against nationwide protests and strikes.

The economy is in tatters, and a deadly COVID-19 wave is devastating the nation. Civilian insurgencies in the cities and border regions have declared a people's war on the military, with local militias carrying out guerrilla-style attacks on military forces.

"(Hostage taking) is a strategy by the junta to inflict 'worry', it is part of the junta's wider campaign of terror waged against the population," the group said. "(It) will only get worse as the junta is increasingly losing on the front lines, with attacks in the cities like Yangon and Mandalay also escalating."

The practice of detaining relatives is aimed at suppressing dissent, but it doesn't appear to be working.

Far away from her happy childhood at their family home, little Su Htet Waing spends her days with her father, exposed to Myanmar's monsoon season, mosquitoes, and the risk of disease.

Soe Htay says he believes the military is still hunting for him so he has to stay in a makeshift tent in the jungle. His daughter has her backpack ready in case they have to run again.

He is determined to continue the fight for democracy in any way he can, despite his seemingly desperate situation.

Soe Htay has been told by friends in the pro-democracy movement, who trickle information out of the prisons and during prisoner releases, that his daughter and wife were separated since their sentencing.

He's also been told his daughter caught COVID-19, but has since recovered.

"The way I see it," he said. "Their sorrow will only be healed after the revolution ... my only thought is to root out the dictatorship, for now I have to bury my bitterness and hatred in the revolution."

Khaing Zin Thaw said she is now in "a safe place" but has to continue moving for fear of being tracked down by the military.

"I am sad and dejected, and I am frustrated as I can't do anything for my parents in jail," she said.