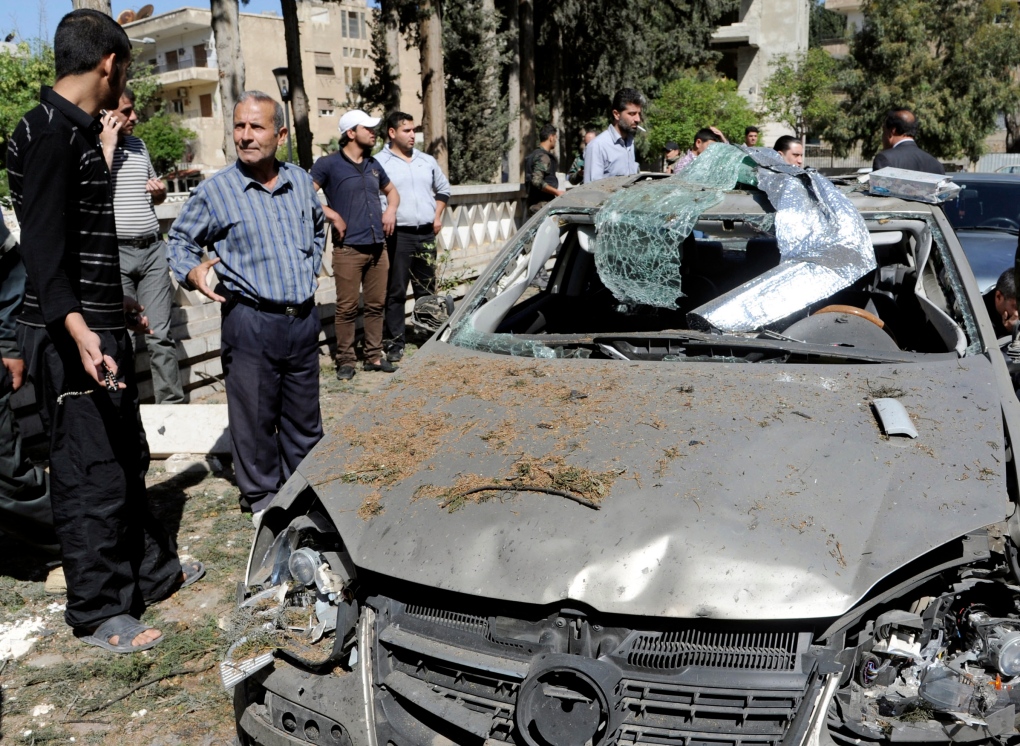 Syrians inspect a damaged car at the scene of a car bomb that exploded in the capital's western neighborhood of Mazzeh, in Damascus, Syria, Monday, April. 29, 2013. (SANA)

DAMASCUS, Syria -- Syria's prime minister escaped an assassination attempt Monday when a bomb exploded near his convoy in Damascus, state media reported, in the latest attack to target a top government official.

Prime Minister Wael al-Halqi was not hurt in the explosion in the capital's western neighbourhood of Mazzeh, state TV said. The TV showed video of heavily damaged cars and debris in the area as firefighters fought to extinguish a large blaze set off by the blast.

A government official said two people were killed and 11 wounded, while the Britain-based Syrian Observatory for Human Rights activist group said the explosion killed at least five, including two of al-Halqi's bodyguards and one of the drivers in his convoy.

The government official spoke to The Associated Press on condition of anonymity because he was not authorized to give official statements to reporters.

As evidence that the prime minister was unhurt, the state-run Al-Ikhbariya station said al-Halqi went into a regular weekly meeting with an economic committee just after the bombing. The station broadcast video of the prime minister sitting around a table in a room with several other officials.

But in the recorded comments after the meeting, al-Halqi made no reference to the bombing, nor was he asked about it by reporters, leaving doubt as to whether the video was shot before or after the bombing.

The state news agency quoted al-Halqi as saying that the assassination attempt exposed how armed groups "are bankrupt" after the latest advances made by Syrian troops around the country.

There was no immediate claim of responsibility for Monday's suicide attack. Such bombings have been a trademark of Islamic extremists fighting in the rebel ranks, raising concerns about their role in Syria's civil war.

Syria's conflict started with largely peaceful anti-government protests in March 2011 but eventually turned into a civil war that has so far killed more than 70,000 people, according to the United Nations.

State TV quoted Syria's Information Minister Omran al-Zoubi as saying that targeting al-Halqi, who is in charge of carrying out the political program to end Syria's crisis, shows that some in the opposition "reject a political solution."

In January, al-Halqi formed a ministerial committee for dialogue with opposition groups. The dialogue is part of a peace plan, including a national reconciliation conference, that Assad outlined in a speech that month.

The opposition insists it will not accept anything less than Assad's departure, and no progress has been reported from the dialogue since it was announced.

A Syrian government official told The Associated Press that an improvised explosive device was placed under a car that was parked in the area and was detonated as al-Halqi's convoy passed. The official spoke on condition of anonymity because he was not authorized to speak to reporters.

The attack in the highly secure Mazzeh neighbourhood took place only about 100 metres (yards) from the Swiss ambassador's residence. The posh area also is home to a major military air base. Security forces sealed off the area, allowing only pedestrians to get near the scene of the bombing.

Damaged cars, their seats soaked with blood, were surrounded by debris. A blackened shell of a school bus was left standing. A man told state TV that none of the students on board were hurt because the explosion went off shortly after they had left the bus and entered the school.

Later Monday, the Observatory reported that nine people, including four fighters and three civilians, were killed in government airstrikes on al-Halqi's home village of Jassem in the southern province of Daraa.

The attack was just the latest targeting a senior official in the Syrian capital during the past year.

On July 18, a blast at Syria's national security building in Damascus during a meeting of Cabinet ministers killed top four officials, including the defence minister and his deputy, who was Assad's brother-in-law. That attack also wounded the interior minister.

In December, a car bomb targeted the Interior Ministry in Damascus, killing several people and wounding more than 20, including Interior Minister Mohammed al-Shaar. Initially, Syrian state media said al-Shaar was not hurt in the Dec. 12 blast. News of his wounds emerged a week later, after he was taken to neighbouring Lebanon to be treated for a serious back injury.

This month, Ali Ballan, head of public relations at the Ministry of Social Affairs and a member of Syria's relief agency, was shot dead while dining in a restaurant in Mazzeh.

Elsewhere in Syria, the Observatory reported fighting Monday near the Damascus International Airport south of the capital. The group said there were also clashes in the northern neighbourhood of Barzeh and shelling of the Palestinian refugee camp of Yarmouk, south of Damascus.

The Observatory and another activist group, the Local Coordination Committees, reported clashes and air raids around the military helicopter base of Mannagh near the border with Turkey in the northern province of Aleppo.

Also Monday, a new jihadi group calling itself the "Ahrar al-Bekaa Brigades" announced its establishment and warned the pro-Syrian Lebanese militant Hezbollah group to stop intervening in the Syrian civil war or face attacks in Lebanon.

According to the SITE Intelligence Group, which tracks Islamist extremist messages, the statement was distributed on pro-Syrian revolution Facebook pages Sunday.

In the statement, the previously unheard of group claimed that Hezbollah is acting on Iran's orders to "slaughter" the Syrian people. It pledged to prevent Hezbollah's intervention "with all means and ways, even if we have to move the fight to the inside of the Lebanese territory."

The Shiite Muslim Hezbollah is known to be backing regime fighters in Shiite villages near the Lebanon border against the mostly Sunni rebels fighting to topple President Bashar Assad. The Syrian opposition accuses Hezbollah of taking part in the Syrian military crackdown.