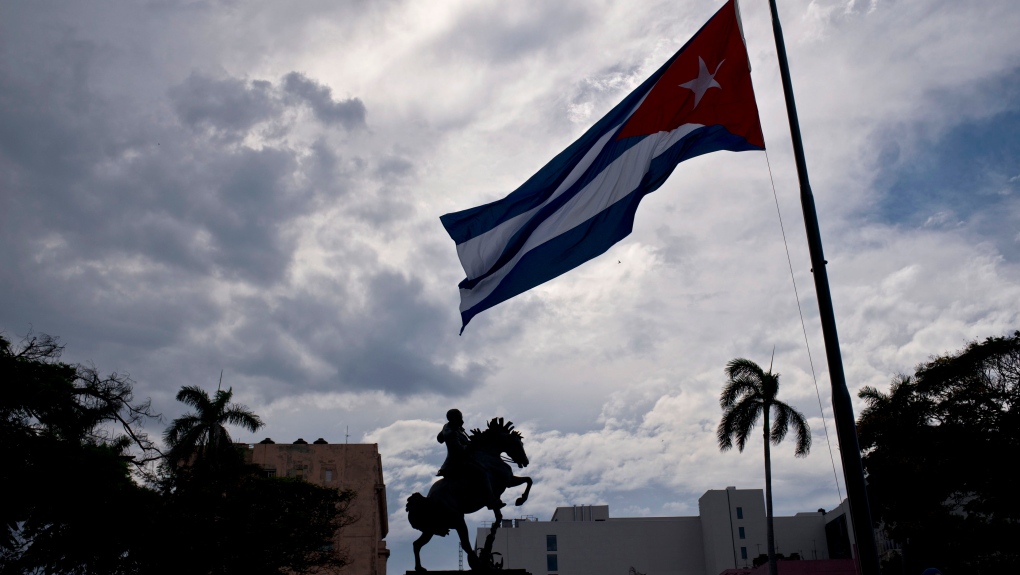 A Cuban flag is seen flying at half-mast near a statue of national hero Jose Marti, marking the start of two days of national mourning, in Havana, Cuba, Saturday, May 19, 2018. (AP Photo/Ramon Espinosa)

HAVANA -- The co-pilot who loved to cook and was fond of inviting his colleagues over for sushi. An Argentine couple who had dreamed of vacationing in Cuba in their retirement. Evangelical pastors returning from a conference.

Officials say 113 people were on a charter passenger jet hired by Cuba's state-run airline, Cubana de Aviacion, when it crashed Friday in the rural outskirts of Havana killing all but three aboard. Here are some of their stories:

Terrero lived with his family near Havana's international airport and worked in the local tourism industry. On Sunday he would have turned 22.

Instead he died not far from home, when the jetliner that was taking him and others to the eastern city of Holguin crashed shortly after takeoff.

His mother, Maidi Charchabal, said she heard the explosion but it wasn't until later that she learned it was her son's flight.

On Sunday, grief-stricken, she and Terrero's father were at the Institute of Legal Medicine where forensic experts were working to identify his and others' remains.

"We are here today so that, even if only in consolation, they hand over his body to us, so we can ... be able to be with him on his birthday," Charchabal said.

"We are very pained by this loss," she added between sobs, holding a picture showing a serious-faced Daniel in a T-shirt that said "Brooklyn."

Rosa Isela Savala Franco, a 48-year-old administrative worker at the Juarez Autonomous University of Tabasco, Mexico, was a single mother of four who battled cancer for two decades.

Alberto Savala Franco said in an interview with Televisa's Foro TV that for years his sister had travelled regularly to the island for injections of a Cuban-developed cancer vaccine made from scorpion venom.

Savala flew there again Tuesday, according to her brother: "We had no idea it would be a one-way trip."

Alberto Savala said his sister left behind three sons and a daughter ages 17 to 26.

"With the desire to live that she had, she tried practically everything (to stave off the cancer). ... For 20 years it worked for her, in truth, it allowed her to help her children get ahead and see them go pretty far in life, because they are studying and everything," he added.

Son Javier told Mexican newspaper El Universal that his mother was a "good woman" who volunteered for various foundations and associations.

"Honestly I don't know what to do. ... I can't assimilate it," he was quoted as saying.

Capt. Jorge Luis Nunez was married with an adult daughter and was an experienced and highly professional airman who "loved his job."

That's according to former flight attendant Ana Marlen Covarrubias, who worked with Mexican charter company Global Air for seven years before leaving in 2016 and considered Nunez a close friend.

"It was an incredible experience flying with him," Covarrubias told The Associated Press in a phone interview. "He was a cheerful man, always happy."

Covarrubias also knew others from the six-person flight crew, all of whom perished in the crash.

First officer Miguel Angel Arreola, who did not have children, enjoyed cooking and would invite colleagues over for homemade sushi.

"He was a great host," Covarrubias said.

She affectionately recalled enjoying Cuba with her colleagues when they were put up in Havana between work flights.

"We were like a family, very close," Covarrubias said. "I met Jorge 20 years ago, and I introduced Miguel Angel to his current partner."

Covarrubias said she believed flight attendant Daniela Rios was in her 20s and recalled her as "serious, and of good character."

Ten married couples who were also evangelical pastors were returning home to Holguin from a national conference. All died.

"They were men and women faithful to God, to their families, to their neighbours and to the people," said Rev. Leonel Lopez, the head of Cuba's Nazarene church.

Lopez said that before leaving on a bus for the airport, the group had been animated, singing and praying. Some had children.

"On that plane were pastor 10 couples, 20 people. All of the Nazarene Church in the eastern region," confirmed Maite Quesada, a member of the Cuban Council of Churches.

Oscar Hugo Almaras and Dora Beatriz Cifuentes had long planned for a dream vacation in Cuba in their retirement.

The married couple was from Mar del Plata, Argentina, a beach resort 250 miles (400 kilometres) south of the capital, Buenos Aires.

Almaras, 63, had worked at Citibank, was a fan of Argentina's Estudiantes soccer team and enjoyed exploring new destinations, according to the newspaper La Nacion.

Cifuentes worked as a nurse in the neonatal unit of the 25 de Mayo hospital, where she was fondly remembered by her former colleagues, with one telling La Nacion "she taught me the ABCs of neonatology."

Cifuentes posted on social media a selfie with his uncle that, he told AP, Almaras had asked to take with him in Rawson, capital of the southern province of Chubut. Cifuentes wrote in his post: "RIP Uncle Oscar and Aunt Beatriz ... Thanks for your last hug."

Emiley Sanchez, 39, miraculously survived the crash and was said to be in "critical" condition in Havana's Calixto Garcia hospital, though conscious and able to communicate.

"She knows that I am here, that her son is here. She asked for water," said her weeping mother, Esther de la O, who travelled from Holguin to be with her daughter.

Sanchez had been in Havana on vacation.