Subway rider gives homeless man 'the shoes off his feet' 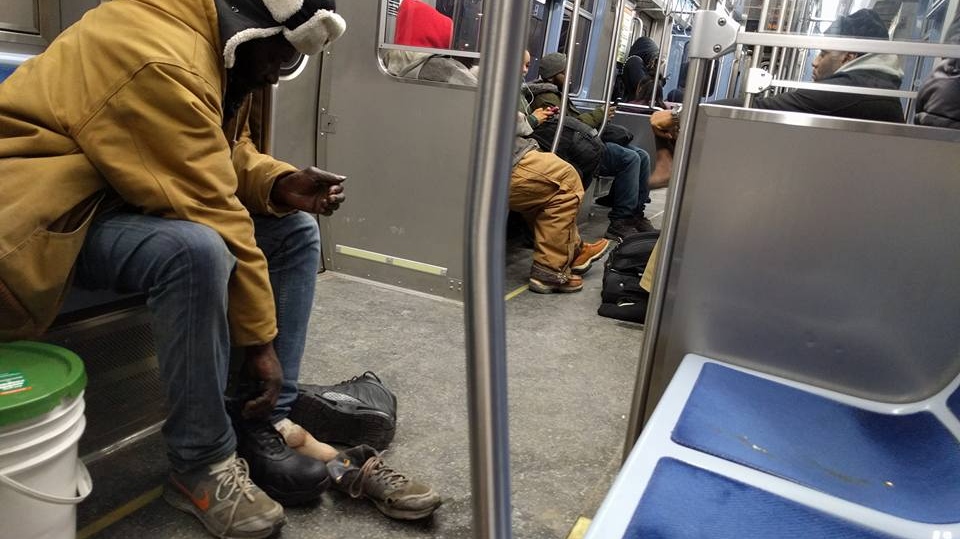 A homeless man removes his tattered shoes to put on a pair of winter boots given to him by another passenger on Chicago's subway system Friday, Jan. 12, 2018. (Jessica Bell / Facebook)

A Chicago woman says she was inspired after seeing a Good Samaritan give away his own winter boots to a homeless man on the subway, in a heart- and foot-warming story that is going viral on Facebook.

Jessica Bell says the incident happened late Friday on Chicago’s public transit system, where she found herself sitting across from an “older, weathered-looking” homeless man. She says in the post that he was wearing shabby, tattered gym shoes and several layers of socks, and that his swollen feet appeared to be bleeding underneath all those layers.

“I don’t know how many pairs of socks he’s wearing in an attempt to keep his feet warm but there is blood seeping through,” she wrote in her post.

Bell says she was astonished to see another man take off his new, expensive-looking boots and hand them over “in a blink-and-you’ll-miss it fashion.” The man, whom Bell described as “younger, carrying a satchel and a suitcase,” also handed over a pair of socks before pulling out a backup pair of shoes from his suitcase.

“These shoes are nice too, but not as nice as the boots,” Bell wrote. “They would have fit the old man just as well, but they were not what this old man needed.”

The incident occurred at approximately 9:30 p.m. on Chicago’s subway, just as frigid winds and a snowstorm were hitting the city.

Bell says she later spoke to the Good Samaritan and learned that his name was Maurice Anderson, and that he was only in town from Kentucky to visit his family. She says he didn’t make a fuss about handing over the boots, and didn’t say anything to anyone about it.

“Maurice took the shoes off his feet in the middle of a Chicago cold snap,” Bell told CTVNews.ca in a telephone interview on Monday.

“He didn’t draw a lot of attention to it,” she said. “It was so quiet and selfless.”

After handing over the shoes, Anderson advised the homeless man to clean his feet before putting on the fresh pair of socks, Bell recounted. Anderson got off the train shortly after.

“I love that in a time and place where hate and apathy are rampant, quiet compassion appears without warning,” Bell wrote.

The homeless man later told her that the boots came as a relief, because he was afraid his feet had become frostbitten from the cold.

Bell told CTVNews.ca that Chicago’s subway runs through the night, and is a common place for the city’s homeless to take shelter from the cold during bad weather.

Bell shared two photos of the older man putting on the boots, tagging the photos as being “with God” at the Chicago Transit Authority.

She says she wrote about the encounter on Facebook while waiting for a bus that night, and by the time she got home, her post had been shared several times. The post also caught Anderson’s attention, and the two have been working through the widespread media attention ever since.

“I’m inspired to continue to try to ‘be the change’ and I pray you are too,” she wrote.

Bell told CTVNews.ca she was truly touched by Anderson’s generosity, adding that it’s just one of the many selfless acts that often go unnoticed in the world every day.

“This is what people want to believe in,” she said.