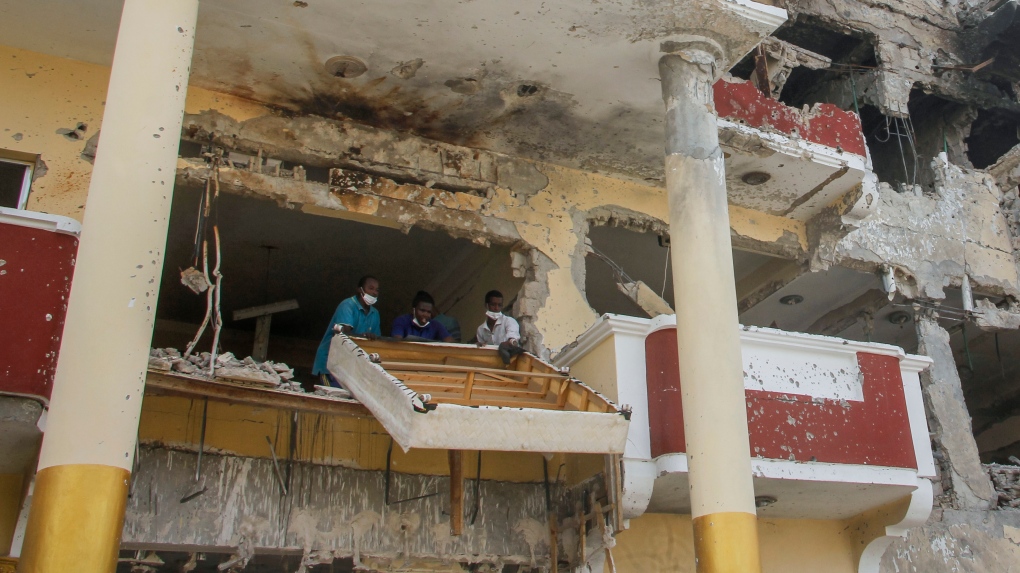 People remove damaged furniture from the destroyed Hayat Hotel, days after a deadly siege by al-Shabab extremists, in Mogadishu, Somalia Wednesday, Aug. 24, 2022. The siege was the longest such attack in the country's history taking more than 30 hours for security forces to subdue the extremists, with more than 20 people killed. (AP Photo/Farah Abdi Warsameh)
MOGADISHU, Somalia -

The extremist group al-Shabab claimed responsibility Sunday for an unfolding armed attack on a hotel in the Somali capital.

Al-Shabab said in a broadcast on its own radio frequency Sunday that said its fighters attacked the hotel Villa Rose, which has a restaurant popular with government and security officials.

The hotel isn't far from the presidential palace in central Mogadishu, where a blast was heard, followed by gunfire.

There was no immediate word on any casualties. Such militant attacks are common in Mogadishu and other parts of the Horn of Africa nation.

Al-Shabab opposes Somalia's federal government, which is backed by African Union peacekeepers, and seeks to take power and enforce a strict version of Sharia law.

Lives were 'shattered' when Kabul fell into Taliban hands, and thousands remain in limbo, unable to return to Afghanistan. CTV News' Genevieve Beauchemin recalls her visit to makeshift refugee camps set up in Pakistani parks, and the stories she heard during that time.

The world’s largest international Arctic sporting event is underway in northern Alberta, where athletes compete in unique games significant to the cultural identity of the North.