'People cannot be illegal': Ben and Jerry's slams U.K. over its handling of refugees 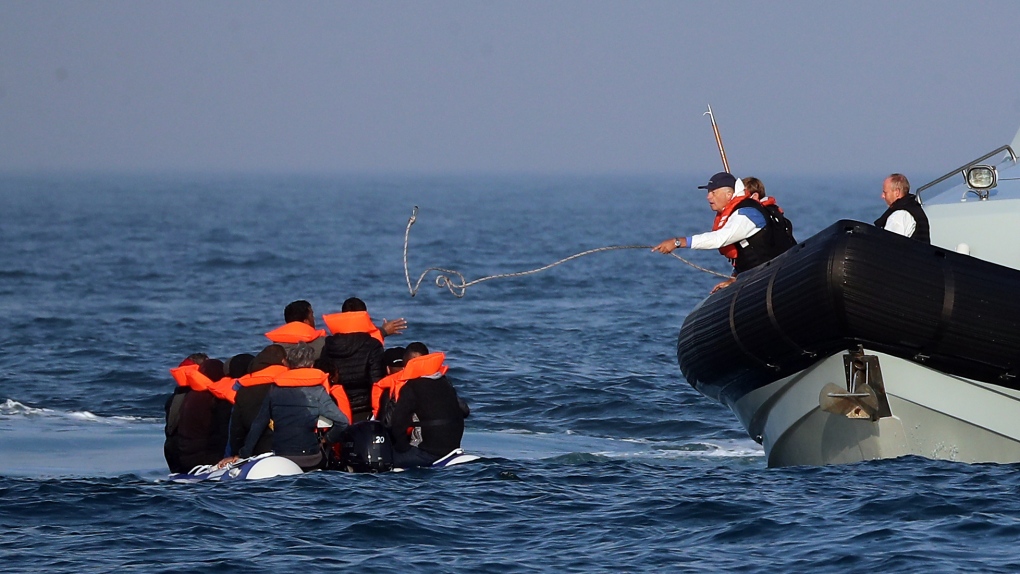 Ben & Jerry's reminded the British government that under the Refugee Convention, a multilateral UN treaty, the illegal entry of refugees does not affect their right to asylum. (Gareth Fuller/PA Images/Getty Images/CNN)

In a series of tweets Tuesday, the politically outspoken ice cream company derided U.K. Home Secretary Priti Patel's attempt to crack down on refugees trying to cross the English Channel, suggesting it was inhumane and contravened international law.

Patel wants to to stop "illegal" attempts by migrants to reach the United Kingdom by crowding into small inflatable boats and making the sea crossing from France. In a statement Sunday, she announced the creation of a new government role — the "Clandestine Channel Threat Commander" — aimed at "making the Channel route unviable for small boat crossings."

Her plan is to explore tougher action in France, including arresting those who arrange the crossings, and intercepting and returning boats that manage to leave French waters. More than 4,000 people have successfully crossed the English Channel in small boats this year. They originally come from countries such as Yemen, Syria, Sudan and Egypt, according to the BBC.

"I know that when the British people say they want to take back control of our borders — this is exactly what they mean," Patel said Friday on Twitter, referring to a slogan used by supporters of Brexit during the EU referendum campaign in 2016 and since.

Ben & Jerry's, which has a long history of political activism, took issue with her approach. The American brand has campaigned on issues such as racial injustice, climate change and refugee rights in the past, occasionally using its ice cream flavors to lobby for change.

"Hey @PritiPatel we think the real crisis is our lack of humanity for people fleeing war, climate change and torture," Ben & Jerry's U.K. posted to its official Twitter account late Tuesday. "People wouldn't make dangerous journeys if they had any other choice. The U.K. hasn't resettled any refugees since March, but wars and violence continue," it added.

"People cannot be illegal ... Let's remember we're all human and have the same rights to life regardless of the country we happen to have been born in."

The company reminded Patel that under the Refugee Convention, a multilateral UN treaty, the illegal entry of refugees does not affect their right to asylum.

While asylum seekers should normally apply for asylum in the EU country they first enter, their applications can be transferred to a different member state if they have relatives or dependents there, spokesperson for the United Nations High Commissioner for Refugees (UNHCR), Laura Padoan, told CNN Business. The United Kingdom is still treated as an EU state until the end of 2020.

Patel has not responded to the tweets, but others within her ruling Conservative Party appear to have relished the challenge.

"Can I have a large scoop of statistically inaccurate virtue signalling with my grossly overpriced ice cream please," quipped party chairman James Cleverly on Twitter.

"They're 'fleeing' France, which is safe, civilised & has a good asylum system. Last year the UK made 20,000 asylum grants. We are the only G7 country to meet the 0.7% aid target & have run the largest refugee resettlement scheme in Europe over the last 5 years. Stick to ice cream," Philps said.

The United Kingdom has received considerably fewer asylum seekers than its European neighbors. Britain received nearly 44,300 first-time asylum applications in 2019, according to EU data. Spain, France, Germany and Greece each received between 75,000 and 142,000 applications last year.

Amnesty International said Sunday that the UK government's decision to deploy Royal Navy ships to prevent people exercising their right to seek asylum would be "unlawful, reckless and dangerous."

"It is wholly legitimate for people to seek asylum in this country — even though relatively few people do — and sadly, for some, these dangerous journeys are the only means available," Steve Valdez-Symonds, director of Amnesty International U.K.'s refugee and migrant rights program, said in a statement.

"The only people benefiting from the UK government's increasing determination to shirk responsibility are smugglers and hatemongers," he added.

The United Kingdom has resettled 18,252 Syrian refugees through official channels since 2014, according to Amnesty International, which describes this as "a pitifully small proportion of the near 4 million Syrians in Turkey, Lebanon and Jordan." Worldwide, around 84% of all refugees live in developing regions, according to the UNHCR.

Unilever, which owns Ben & Jerry's, declined to comment. The Anglo-Dutch consumer goods giant bought the company in 2000 but allowed it to retain an independent board of directors.

In June, Ben & Jerry's issued one of the most forceful corporate statements on racial discrimination, as nationwide protests swept America following the death of George Floyd. It's one of few companies that has explicitly supported calls to defund the police in the United States.

"We're a wholly owned subsidiary [of Unilever], but we still act according to Ben & Jerry's mission, vision and values," a spokesperson told CNN Business in June.