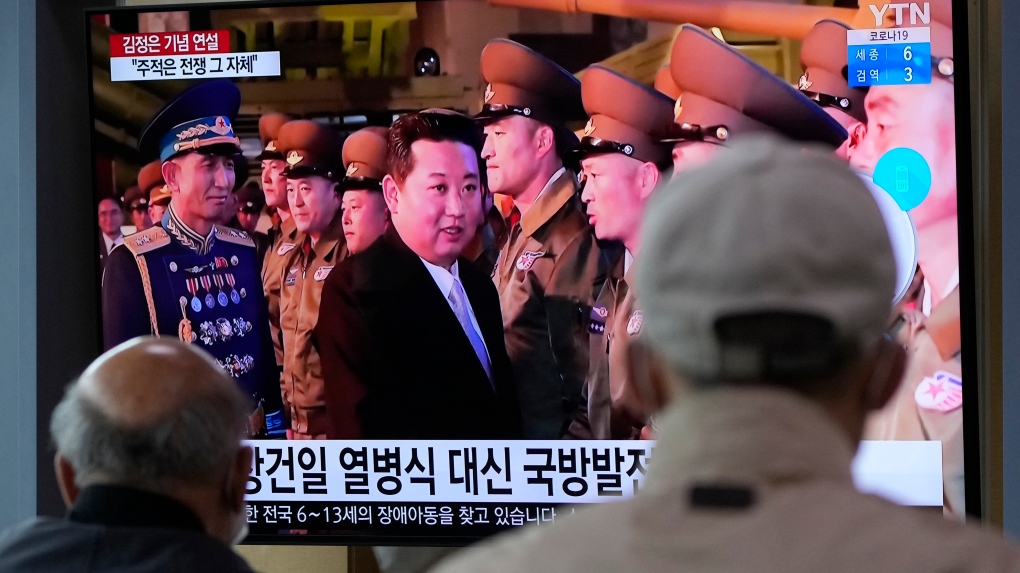 SEOUL, SOUTH KOREA -- North Korea said Wednesday that it had test-fired a newly developed ballistic missile from a submarine, in its first such underwater test-launch in two years and one it says will bolster its military's undersea capabilities.

The test Tuesday was the fifth round of missile launches since September and came as North Korea steps up pressure on Washington and Seoul to abandon what Pyongyang sees as hostile policies such as joint U.S.-South Korea military drills and international sanctions on the North.

North Korea's state-run Korean Central News Agency said the latest test "will greatly contribute to putting the defense technology of the country on a high level and to enhancing the underwater operational capability of our navy." It said the new missile has introduced advanced control guidance technologies including flank mobility and gliding skip mobility.

The North's neighbors said Tuesday that they detected the North's missile firing and said the weapon landed in the waters between the Korean Peninsula and Japan. South Korea's military described the missile as a short-range, submarine-launched ballistic missile and said the launch was made from waters near the eastern port of Sinpo, where North Korea has a major shipyard building submarines.

KCNA said Tuesday's launch was made from "the same 8.24 Yongung ship," a submarine that North Korea said it used to conduct its first submarine-launched strategic ballistic missile test in 2016. Photos published by North Korea show a missile rising and spewing bright flames above a cloud of smoke from the sea. One image shows the upper parts of what looks like a submarine on the surface of the sea.

North Korea last performed a SLBM test in October 2019. Foreign experts said the North used a submersible barge, rather than a submarine, for the launch at the time.

Tuesday's launch was the highest-profile weapons test by North Korea since U.S. President Joe Biden took office in January. The Biden administration has repeatedly said it's open to resuming nuclear diplomacy with North Korea "anywhere and at any time" without preconditions. The North has so far rebuffed such overtures, saying U.S. hostility remains unchanged.

The launch came days before Sung Kim, Biden's special envoy on North Korea, was to travel to Seoul to discuss with allies the possibility of reviving diplomacy with Pyongyang.

At a meeting in Washington with his South Korean and Japanese counterparts, Kim emphasized U.S. condemnation of the launch, which violates multiple UN Security Council resolutions, and urged Pyongyang to refrain from further provocations and "engage in sustained and substantive dialogue," the State Department said.

The UN Security Council scheduled emergency closed consultations on North Korea on Wednesday afternoon at the request of the United States and United Kingdom.

Japanese Defense Minister Nobuo Kishi had said Tuesday that the North Korean missile flew on "an irregular trajectory" while traveling as far as 600 kilometres (360 miles).

"A SLBM is the most intimidating nuclear weapon because we don't know where it can be fired," said Moon Keun-sik, a submarine expert who teaches at Kyonggi University in South Korea. "North Korea's goal is building more powerful SLBMs that can be fired from big submarines like the U.S. does."

North Korea has been pushing hard for years to acquire the ability to fire nuclear-armed missiles from submarines, the next key piece in an arsenal that includes a variety of weapons including ones with the potential range to reach American soil.

Still, experts say it would take years, large amounts of resources and major technological improvements for the heavily sanctioned nation to build at least several submarines that could travel quietly in seas and reliably execute strikes.

North Korea has an estimated about 70-90 diesel-powered submarines in one of the world's largest submarine fleets. But they are mostly aging ones capable of launching only torpedoes and mines, not missiles. The vessel North Korea used during the 2016 SLBM test is the North's only submarine capable of firing a missile, but it has a single launch tube and some experts call it a test platform, rather than an operational weapons system in active service, Moon said.

In 2019, North Korea unveiled a 2,000-ton-class submarine with several missile launch tubes but there has been no official confirmation that it's been deployed for operational use. North Korea is pushing to build bigger submarines including a nuclear-powered one.

Kim, the analyst, said the new missile tested Tuesday was likely a small-sized weapon displayed during a defense exhibition last week. The professor said North Korea likely plans to load this missile on the submarine it disclosed in 2019 while placing bigger SLBMs on larger submarines under development.

Some experts say North Korea might continue its weapons tests for a couple of more months until it halts them in consideration of the Winter Olympics slated for February in China, its last major ally and economic pipeline. They say the North may even test-launch long-range missiles directly threatening the U.S. mainland in a breach of a 2018 self-imposed moratorium on such weapons tests to maximize its pressure campaign.

Nuclear negotiations between the U.S. and North Korea have been stalled for more than two years because of disagreements over an easing of crippling U.S.-led sanctions against North Korea in exchange for denuclearization steps by the North.