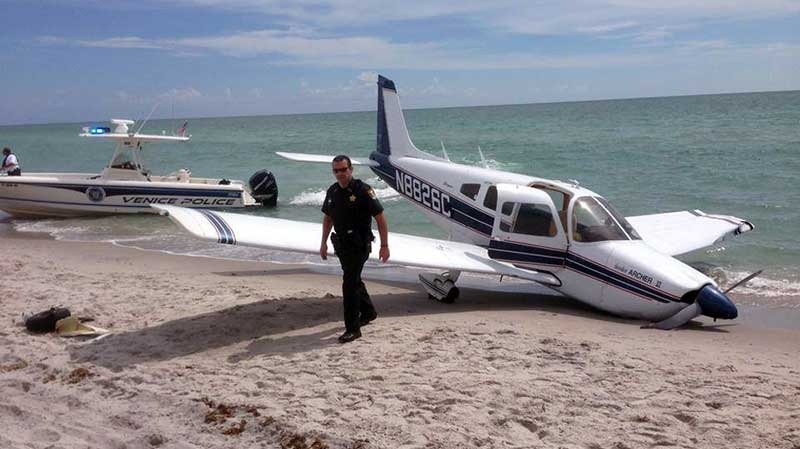 Emergency personnel at the scene of a small plane crash in Caspersen Beach in Venice, Fla., Sunday, July 27, 2014. Authorities say a father was killed and his daughter seriously injured while walking on the sand when a small plane crash landed along Florida's Gulf Coast near Venice Beach. (AP Photo/Sarasota County Sheriff's Office)

SARASOTA, Fla. -- A father was killed and his daughter seriously injured Sunday while walking along a Florida beach when a small plane crash landed and struck them, authorities said.

Wendy Rose, a spokeswoman for the Sarasota County Sheriff's Office, said the pilot and his passenger weren't hurt when the Piper aircraft lost power and touched down next to the water's edge.

"A man and one of his children who were walking on the beach were apparently injured by the plane," said Rose. She said a local airport received a distress call that the plane couldn't make it back to the airport.

"He knew he couldn't make it back to the airport and was going to try to land on the beach. And he did land at the edge of the water on the beach," Rose added.

She said the girl was airlifted to a hospital where she was apparently in critical condition. The identities of those involved were not immediately released.

Kathleen Bergen, a spokeswoman for the Federal Aviation Administration, told The Associated Press in an email that the agency was investigating. She said the plane reportedly lost power but had no details.