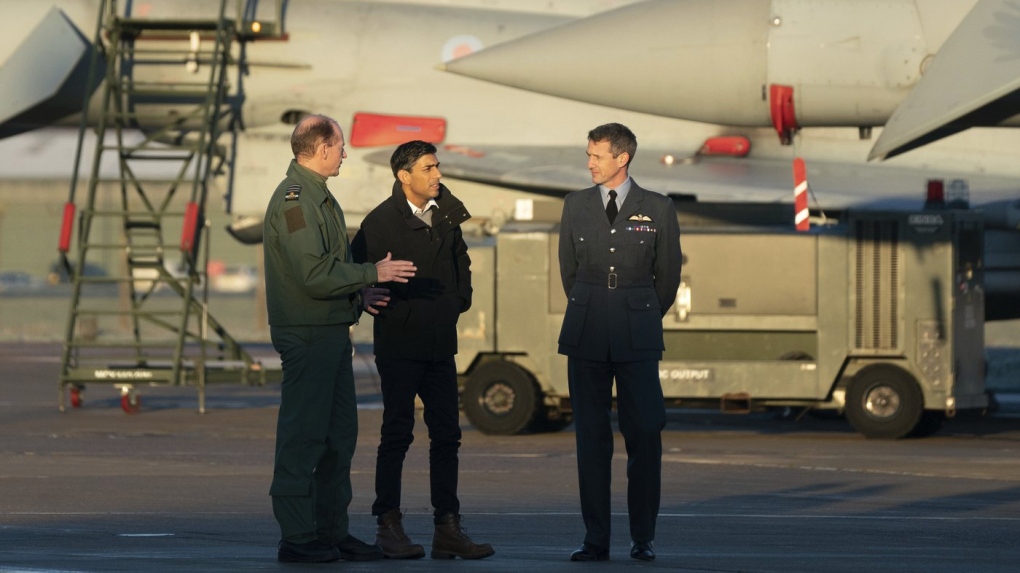 Japan announced Friday that it will jointly develop its next-generation fighter jet with the U.K. and Italy as it looks to expand defence cooperation beyond its traditional ally, the United States.

The Mitsubishi F-X fighter jet will replace the aging fleet of F-2s that Japan previously developed with the United States.

The nations will merge their current plans for development of next-generation planes -- the F-X and Britain's Tempest, a successor to the Eurofighter Typhoon -- to produce the new combat aircraft for deployment in 2035. The deal will give Japan greater support in countering China's growing assertiveness and allow Britain a bigger presence in the Indo-Pacific region.

The announcement came four days after Prime Minister Fumio Kishida set spending targets aimed at building up Japan's military capability, including a huge boost in defence spending over the next five years. To meet the five-year spending total of 43 trillion yen ($316 billion), the government will need an extra 4 trillion yen ($30 billion) in defence spending annually. Of that, a quarter is to be funded through tax increases.

A revised national security strategy, which is expected to be released later this month, is predicted to allow the country to develop a pre-emptive strike capability and deploy long-range missiles. That's a major and contentious shift away from Japan's self-defence-only defence policy adopted after its World War II defeat in 1945.

To counter growing threats from China and North Korea, Japan has been expanding its defence partnerships with countries in the Indo-Pacific, including Australia, with Southeast Asian countries and with Europe.

The agreement and a reciprocal access agreement that Japan and Australia signed in January form "an architecture" for their deeper cooperation that would also include the United States, Australian Defense Minister Richard Marles said in opening remarks at the meeting. Marles told a joint news conference later that Australia wants to commit to more "high-end and complex" exercises, both bilaterally and with the United States.

Japan's new security strategy allows it a bigger strike capability and it hopes to expand joint exercises in Australia, including firing drills that are difficult to conduct at home, Japanese Defense Ministry officials said.

In a speech earlier Friday, Marles said China's military buildup is "the most significant factor shaping the strategic landscape in which Australia and Japan exist," and that Australia in coming months will take "a series of steps to ensure our defence and security settings respond to the environment around us."

Japan's Defense Ministry said the new aircraft will be a multi-role stealth fighter superior to the F-35 and the Eurofighter, with advanced censors and networking. The warplane is expected to replace 94 F-2s in Japan, 144 Eurofighters in the U.K. and 94 Eurofighters in Italy, Japanese officials said.

Japan eased an arms export ban in 2014 and created its own Acquisition, Technology & Logistics Agency a year later, seeking to beef up the sluggish domestic defence industry and promote joint technology research, development and sales with friendly nations. That strategy has made little headway since the government, instead of promoting sales, increased big-ticket purchases from the United States.

Japan initially considered Lockheed Martin as its partner in developing the next-generation fighter. But it dropped the plan, reportedly due to the U.S. company's reluctance to share expertise key to stealth technology.

Japan and the United States instead will cooperate in "autonomous systems capabilities, which could complement Japan's next fighter program," the two governments announced Friday.

Britain and Italy were chosen as partners after Japan ensured they would share key information allowing each country to make its own decisions on repairs, officials said.

Under the fighter jet agreement, Japan's Mitsubishi Heavy Industries will partner with British defence contractor BAE Systems PLC. Italy's Leonardo S.p.A will be a key player in the project. Japan's IHI, Britain's Rolls Royce and Italy's Avio Aero will be in charge of its engine, while Mitsubishi Electric Co., Leonardo U.K. and Leonardo S.p.A. will work on avionics, the Japanese side said.

British Prime Minister Rishi Sunak said in a statement that the joint fighter development reflects the need to stay at the cutting edge of advancements in defence technologies to outpace "those who seek to do us harm." The security of the Euro-Atlantic region and the Indo-Pacific are "indivisible," he said.

His office said the ambition was to make a jet "enhanced by a network of capabilities such as uncrewed aircraft, advanced sensors, cutting-edge weapons and innovative data systems."

The leaders of the three countries said in a joint statement that the project, called "the Global Combat Air Program," will deepen defence ties, science and technology collaboration, help integrate supply chains and further strengthen the defence industry.