In race to win, U.K. Conservatives accused of ignoring crises

In race to win, U.K. Conservatives accused of ignoring crises 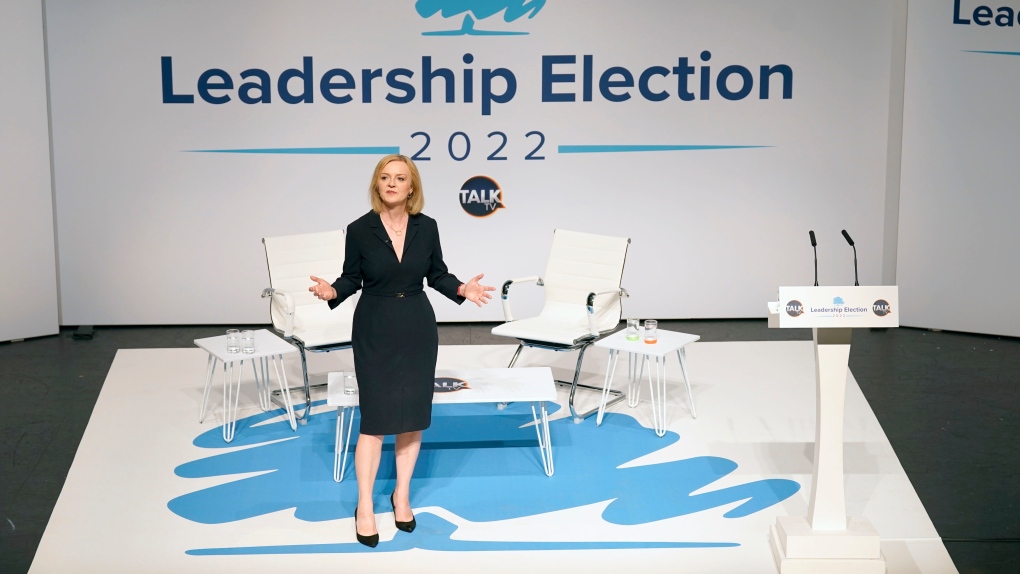 Liz Truss during a hustings event in Darlington, England, Tuesday Aug. 9, 2022, as part of the campaign to be leader of the Conservative Party and the next prime minister. Conservative Party members are choosing between Foreign Secretary Liz Truss and former Treasury chief Rishi Sunak to replace Prime Minister Boris Johnson. (Danny Lawson/PA via AP)
LONDON -

As Britain swelters through a roasting summer, and braces for a cold financial reckoning in the fall, calls for the Conservative government to act are getting louder.

But the Conservatives are busy choosing a new leader, through a prolonged party election whose priorities often seem remote from the country's growing turmoil.

Britons' energy bills have soared -- and further hikes are coming -- as the war in Ukraine squeezes global oil and gas supplies. The Bank of England is predicting a long, deep recession later this year alongside 13 per cent inflation. Meanwhile, temperatures in Britain hit 40 degrees Celsius in July for the first time ever, and millions are facing limits on water use as England's green and pleasant land dries to a desiccated brown.

There is little sense of crisis among Conservatives as Foreign Secretary Liz Truss and former Treasury chief Rishi Sunak crisscross the country wooing the 180,000 party members who will choose a successor to departing Prime Minister Boris Johnson. Under Britain's parliamentary system, the winner of the Tory leadership race -- to be announced Sept. 5 -- will also become prime minister, without the need for a national election.

Conservative members are largely middle-aged or older, mostly middle-class or affluent, and their views don't always reflect those of the country as a whole.

"I'd like to see some true Conservative policies," said Helen Galley, a lawyer and local Conservative official attending a candidates' meeting in the English seaside town of Eastbourne. "Low taxation, smaller state, less regulation, freeing industry and commerce from EU regulations. ΓÇª Some self-reliance and sense of responsibility for yourself."

Those priorities are mirrored in the campaign pitches of Truss and Sunak, who say they will tackle the cost-of-living crisis through long-term measures to boost the economy. Truss says she would cut individual and corporate taxes rather than give people "handouts." Sunak says he'll tackle inflation before lowering taxes, and will offer unspecified help to people struggling to pay their bills.

Critics say neither candidate is grasping the scale of the crisis. Millions of households face a financial squeeze in October, when a cap on household energy bills tied to wholesale prices is next raised. Consulting firm Cornwall Insight forecasts the average household will then be paying over 3,500 pounds ($4,200) a year for gas and electricity, more than double the amount a year earlier -- with a further hike due in the new year.

Martin Lewis, a consumer champion who runs the popular Money Saving Expert website, has warned that "we are facing a potential national financial cataclysm," with millions unable to heat their homes this winter.

Former Prime Minister Gordon Brown, who led the U.K. during the global financial crisis of 2008, called for Johnson, Truss and Sunak to get together and draw up an emergency budget in preparation for a "financial time bomb" in October.

"It's not just that they're asleep at the wheel -- there's nobody at the wheel at the moment," Brown, a member of the opposition Labour Party, told broadcaster ITV.

Brown's call was echoed by Tony Danker of business group the Confederation of British Industry, who said "we simply cannot afford a summer of government inactivity while the leadership contest plays out."

But with Parliament adjourned for its summer recess and Johnson whiling away his last weeks in office, big policies are on hold. The few government announcements in recent weeks have been decidedly modest -- one was a plan from a "Chewing Gum Task Force" to get sticky stains off city streets.

Johnson's spokesman, Max Blain, said the outgoing leader is barred from making "major fiscal interventions" during the transition period, and any new cost-of-living remedies must be for the next prime minister to decide.

"The Conservative Party -- and therefore the government -- is having a completely different conversation to the public," said Alan Wager, a research associate at the U.K. in a Changing Europe think-tank. "And it's quite a serious time to be having this very big disjuncture."

Anti-poverty and environmental protesters have dogged Truss and Sunak at campaign events -- a reminder of the world outside the Conservative bubble. In Eastbourne, several climate activists who had infiltrated the crowd stood to heckle Truss for failing to tackle the climate crisis. They were removed to chants of "Out, out, out" from the Conservative audience.

The environment has scarcely featured in the contest. Both Truss and Sunak say they will keep the government's target of cutting Britain's carbon emissions to net zero by 2050, while offering policies that would make that harder.

Party polls suggest Truss likely has an unassailable lead in the contest. Sunak is regarded with suspicion by some Tories for quitting the scandal-plagued government last month, a move that helped bring Johnson down. The former finance minister has been painted by opponents as a high-taxing, high-spending near-socialist because of the billions he spent to prop up the economy during the coronavirus pandemic.

Truss styles herself as a disruptor who will "be bold" in slashing taxes and ripping up red tape -- a message many Tories are keen to hear.

Party member Robbie Lammas, part of a "Liz for Leader" contingent at the Eastbourne event, said he likes Truss's "more optimistic view" of the economy.

"It's good to be bold and good to challenge orthodoxy," he said.

Another audience member, Wilhelmina Fermore, said she was "on the fence," but leaning toward supporting Truss because "she's more engaging and I think that she relates to people on the street."

Yet what appeals to the Conservative Party does not necessarily appeal to the country. And Chris Curtis, head of political polling at research company Opinium, says the candidates' economic promises will soon collide with stark reality.

"Liz Truss can believe all she likes that she's going to be able to solve this thing through tax cuts, but there's a big chunk of the population that's about to get hammered," he said.

"Talking about how you are going to help those people is not the kind of thing that will appeal to Conservative Party members ... (but) there is going to have to be a new massive intervention to help people this autumn."