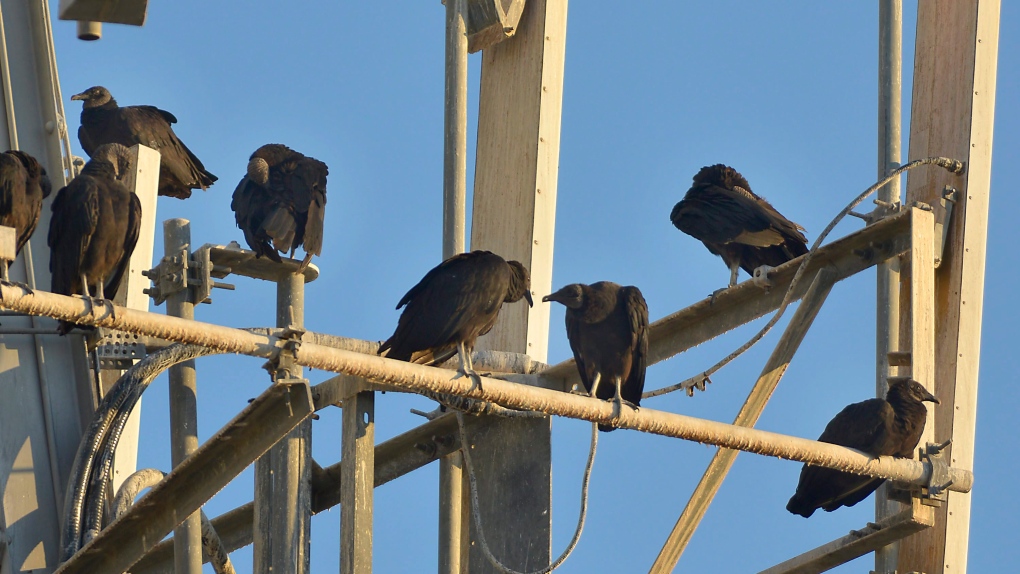 WEST PALM BEACH, Fla. -- A New York couple's luxurious vacation house in Florida has been taken over by dozens of black vultures that are vomiting and defecating everywhere.

The Palm Beach Post reports the Casimano family can't even visit the $702,000 home they purchased earlier this year in the Ibis Golf and Country Club.

Siobhan Casimano described the smell as "like a thousand rotting corpses." The vultures have destroyed screen enclosures and have overtaken the pool and barbecue. The few times the family has visited, they've had to park their car in the garage to avoid the birds pecking at them with their beaks.

A neighbour, Cheryl Katz, tells the Post she's got it even worse because she lives next door to a person who is feeding the vultures and other wildlife. In May, she said vultures tore through her pool enclosure and couldn't figure out how to get out.

"Imagine 20 vultures trapped, biting each other -- and they can bite through bones," she said. "They would bang against my windows running away from a bird that was attacking them. Blood was everywhere. It was a vile, vicious, traumatic event. And it was Memorial Day, so no company I called would come out to help me."

Finally, three police officers arrived. They removed the screens and shooed away the vultures.

Since she has chronic lymphocytic leukemia, which leaves her vulnerable to infections, she's had to be extra careful going outside, even having someone power wash the patio twice.

The homeowners blame Katz's neighbour, a woman who they claim is excessively feeding wildlife. Katz said she has seen the neighbour give bags of dog food and even a roasted chicken to the vultures.

Neighbourhood association president Gordon Holness said association members have warned the woman but are limited in what they can do because the vultures are migratory birds protected by federal law. He said the Florida Fish and Wildlife Conservation Commission issued a warning to the neighbour, but thus far she has ignored it. Katz said the neighbour also won't answer her telephone or respond to email.

People have suggested scaring the vultures off with fireworks or balloons, Katz said. The newspaper quoted an expert as saying that killing a vulture, having it stuffed and hanging it in a prominent place would work because vultures avoid their own dead. But Katz said she found out from the U.S. Wildlife Service that it is hard to get a federal permit to kill the protected bird.

Katz said she even tried putting out four fake owls that have moving heads and blinking lights.

"The vultures chewed the owls apart," she said. "They ripped the heads off."