Florida officials urge residents to prepare for Tropical Storm Ian, forecast to be a major hurricane before it reaches Cuba

Florida officials urge residents to prepare for Tropical Storm Ian, forecast to be a major hurricane before it reaches Cuba 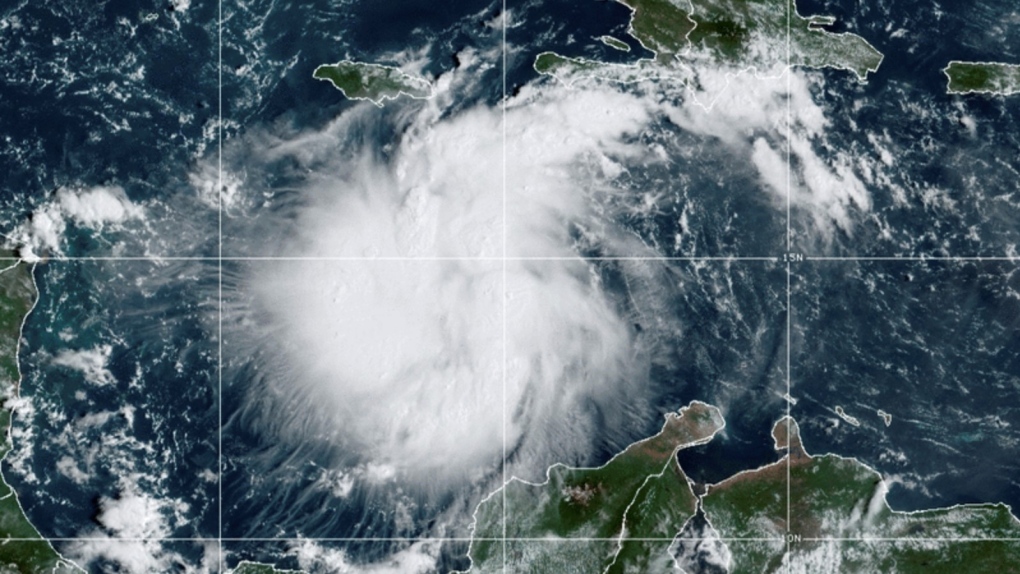 This satellite image provided by the National Oceanic and Atmospheric Administration shows Tropical Storm Ian over the central Caribbean on Saturday, Sept. 24, 2022. (NOAA via AP)

Floridians are bracing for Tropical Storm Ian, which is expected to rapidly intensify and become a hurricane Sunday before hitting western Cuba, bringing with it the threats of strong winds and storm surge as high as 9 to 14 feet, according to the National Hurricane Center.

Ian's exact path beyond Tuesday remains unclear: The storm, which developed Friday in the central Caribbean Sea, is expected to reach the US later this week, but with models showing a wide spread of possible scenarios, it's too early to know where the storm will hit, when -- and how strong it will be.

Meteorologists predict the storm will peak at Category 4 strength over the eastern Gulf of Mexico in three days, but Ian is then expected to weaken before reaching Florida.

Still, Florida officials are urging residents to be prepared for the worst, and the hurricane centre warned Sunday morning of a "risk of dangerous storm surge, hurricane-force winds, and heavy rainfall along the west coast of Florida and the Florida Panhandle" by the middle of the week, regardless of the storm's exact track and strength.

"We're going to keep monitoring the track of this storm, but it's really important to stress the degree of uncertainty that still exists," Gov. Ron DeSantis said in a news conference Sunday, warning residents that even if the storm weakens before landfall, it would "still have significant impacts."

Floridians can expect "heavy rains, strong winds, flash flooding, storm surge and even isolated tornadoes," the governor said. But the director of Florida's Division of Emergency Management was particularly focused on the storm surge threat, cautioning that whatever surge develops while Ian is a major hurricane could persist as it nears land, even if the storm weakens.

"We could see a situation where we have Cat 4 storm surge and potentially a Cat 1 or 2 hurricane landfall," Director Kevin Guthrie said.

Florida residents should know their evacuation routes and have preparedness kits that can last them at least three days, Bink told CNN. "Things like food, water, battery chargers for your phone. Even things like your insurance documents -- take pictures of them so you have them with you," Bink said.

"We expect rapid intensification with this storm," Bink said. "My message is: please take this seriously, and please listen to your local officials."

In the meantime, Ian is expected to be a major hurricane -- one that is Category 3 or higher -- by the time it passes near or over western Cuba, the hurricane centre said Sunday morning, and forecasters are becoming more confident residents there will face life-threatening storm surge and hurricane force winds.

As of Sunday morning, Ian was about 300 miles south-southeast of Grand Cayman with maximum sustained winds up to 50 mph (85 kph), per the hurricane center, as it moved west-northwest at about 14 mph (22 kph).

A hurricane warning is in effect for Grand Cayman and several Cuban provinces, including Isla de Juventud, Pinar del Rio and Artemisa, while a tropical storm warning has been issued for the provinces of La Habana, Mayabeque and Matanzas.

Tropical storm conditions are possible across Cuba on Monday afternoon, and hurricane conditions will likely follow late Monday into Tuesday, the hurricane centre said. Ian is forecast to bring 6 to 10 inches of rain with isolated totals up to 16 inches possible in western Cuba. That could contribute to flash flooding or even mudslides in areas of high terrain. And storm surge is forecast along the coast of western Cuba from Monday night into Tuesday.

According to the hurricane centre, Ian will keep its major hurricane status as it moves north through the Gulf of Mexico.

Authorities in Florida are distributing sandbags and asking Floridians to prepare their property to reduce the risk of storm damage and to stock up on supplies like radios, water, canned food and medication. Residents should also pack up important documents and know their evacuation routes.

"This is the calm before the storm," Naples Mayor Teresa Heitmann told CNN on Saturday. "We experience this kind of adrenaline before a storm and the path could change at any time, but we want our citizens to be ready."

On Saturday, Florida Gov. Ron DeSantis expanded an emergency order to include every county in the state, saying conditions are "projected to constitute a major disaster." President Joe Biden declared an emergency for Florida and ordered federal assistance to supplement response efforts.

Storm surge -- when the force of a hurricane or storm pushes ocean water onshore -- can be one of the greatest threats to life and property from a hurricane. This is the primary reason Miami-Dade County residents are asked to evacuate before a hurricane, according to county officials.

"We're outside of the cone of uncertainty. We can't relax," Miami-Dade County Mayor Daniella Levine Cava told CNN on Saturday. "We know there's always a possibility it will shift. The storm has continued to move westward. This is the time everyone should make sure they have a plan."

Levine Cava urged residents to make sure they have enough food and water and check their storm surge planning zone.

"We're very hopeful that even with a major rain event, we'll be able to manage it," she said. "We're on standby. We have extra pumps, and we've worked with the South Florida Water Management District to lower canal levels."

Miami-Dade County is preparing its "extensive shelter system," including for those fleeing the Florida Keys if evacuations are ordered there.

Heitmann is already seeing lines at the gas stations in Naples as residents brace for the potential hurricane, she said.

"They're taking it serious, and I encourage those that are not to always take a storm serious, because you can never estimate where that storm might turn. And we need to be prepared and if it's not coming directly for us, it might have strong winds," Heitmann said.

In Sarasota, authorities are checking on generators, planning with local police, trying to estimate how much flooding is possible and warning residents to be prepared, Mayor Erik Arroyo told CNN.

"Don't underestimate the dangers that come with gusts, with storm surges, with flooding, especially us being a coastal city. So we're telling them to go now, be prepared early," Arroyo said.