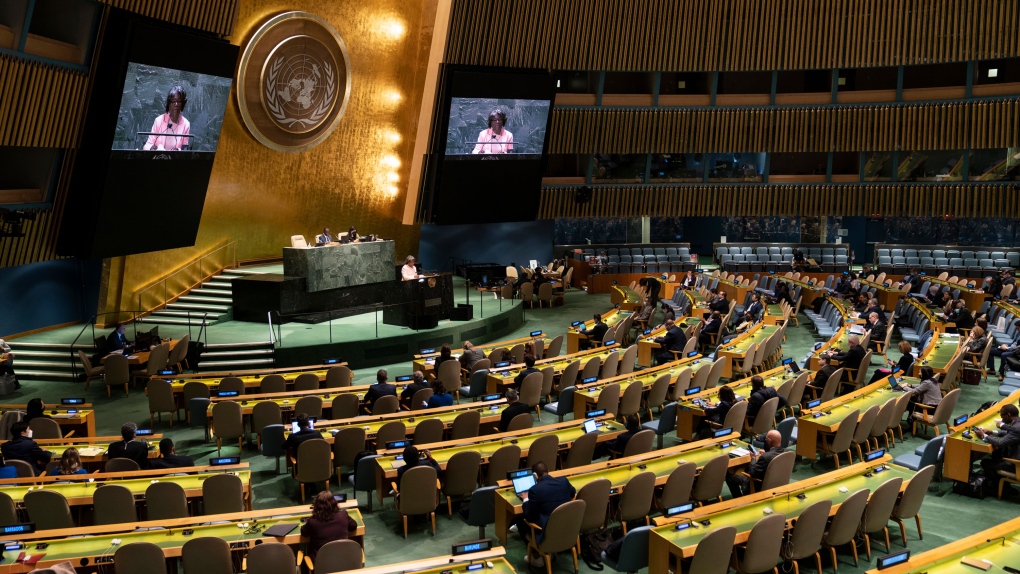 Few men in power have delved deeply into gender equality on the main stage of the United Nations this month, but the ones who did went there boldly: claiming feminist credibility, selling "positive masculinity" and resolutely demanding an end to The Patriarchy.

On the first day of the General Assembly gathering of world leaders, Bolivian President Luis Arce touted 2022 as "The Year of the Cultural Revolution for Depatriarchalization" for his country, and urged the United Nations to adopt a decade-long effort to do the same.

Arce said his country wanted to promote policies to "transform this regrettable reality that is caused by patriarchy as the most ancient system of oppression, and that is also linked to colonialism and capitalism."

Gender equality, as one of the United Nations' primary goals, has long been a safe talking point for world leaders, and there were many brief and polite mentions of progress made toward female empowerment, including promoting women into prominent roles, ensuring equal educational opportunities for girls, and supporting women's autonomy over their own bodies.

There were also some leaders who did not say the words "women" or "girls" at all during their time on stage -- the king of Jordan, the president of Cyprus, the prime minister of Japan.

At other times, "feminism" -- considered an f-word by many for generations -- was used proudly.

"We are living in times in which demanding basic rights is still a revolutionary act," Sanchez said in his UN address. "The global threats to women's sexual and reproductive freedom are yet another example of how painfully slowly the world is moving towards guaranteeing full equality. Worse still, is the fragility of our past social gains, which have fallen victim to backsliding in certain advanced democracies -- something quite inexplicable at this stage of the 21st century."

It was an impassioned jab, apparently directed at the event's host country, where a recent Supreme Court ruling ended the constitutional right to abortion. In contrast, U.S. President Joe Biden offered only a passing mention of abortion rights -- even as the court decision continues to ripple across the nation.

"The future will be won by those countries that unleash the full potential of their populations, where women and girls can exercise equal rights, including basic reproductive rights," Biden said in his speech.

The contrast was a stark reminder that words matter, said Sylvia Maier, a global gender studies professor at New York University, who said the unabashed use of progressive language by some world leaders on this prominent stage was new, unusual and surprising. The largest gathering of world leaders remains a forum that is dominated by men.

"It's about time we stop using euphemisms and beating around the bush," Maier said. "It's about time that we start talking about what we're facing in no uncertain terms. We cannot resolve these issues -- which are all interlinked -- without really calling it what it is."

Congolese President Felix Tshisekedi said in his speech that he was a "champion for positive masculinity," claiming a need for "radical change" while highlighting an African Union men's conference to tackle a surge in violence against women. "Because equality is not a gift given to women," Tshisekedi said.

The United Nations has defined positive masculinity as "an innovative approach to engaging and involving men, and making them allies in gender equality and peacebuilding efforts in conflict and post-conflict settings."

Maier said it's important to model the so-called idea of "what a good and honourable man should do" -- from resisting violence and speaking up as a bystander, to understanding consent, believing survivors of gender violence and creating services to help those in crisis.

"It's hard work changing social norms, which are really gender stereotypes," Maier said. "Positive masculinity really means a reinforcement of positive character traits but all of these character traits, they shouldn't even have a gender."

The issue is especially acute for Congo. One of the poorest and least developed nations in the world, the country has long struggled with high rates of sexual violence, domestic abuse and child marriage.

"The problem is not masculinity," said Ousseina Alidou, a professor who leads the Center for Women's Global Leadership at Rutgers University and serves as president of the African Studies Association. "Who we are is not the problem, but what we embrace as an ideology."

Alidou said it is commendable that Africa is taking the issue seriously as part of the continent's healing from its painful history of colonization.

"Patriarchy has been the framework for which colonialism has manifested itself, in the most inhumane way on the African continent," Alidou said. "Patriarchy is not a monopoly of only one region of the world. It is a world phenomenon."