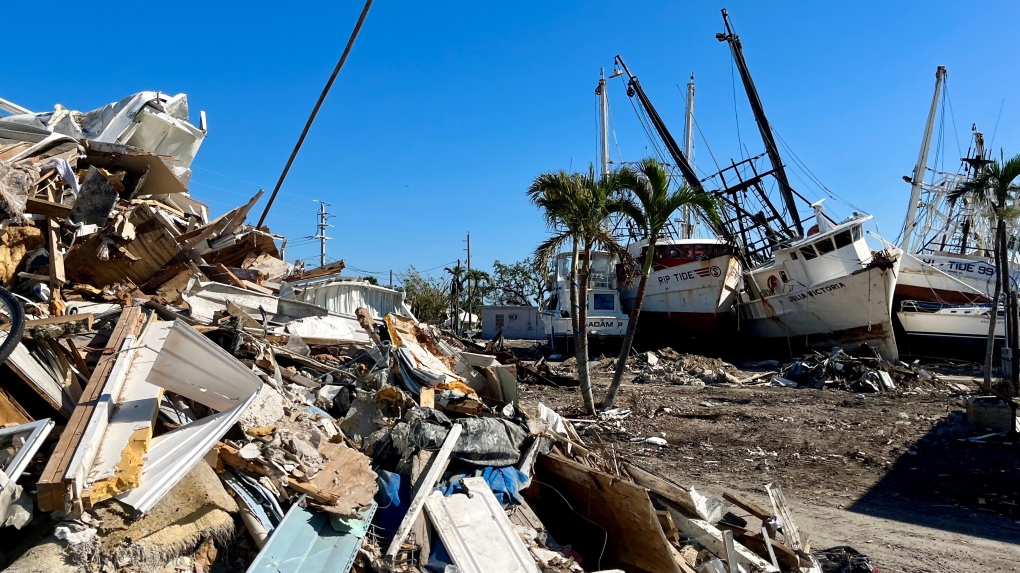 It started just 10 days ago when residents placed a few poinsettias at the foot of the washed-away pier where Hurricane Ian had destroyed the holiday-season palm.

Within the week that symbolic act blossomed into nine levels of donated potted plants encircling a quickly replanted palm with dozens more surrounding the site. It’s now unofficially known to locals as the Tree of Hope.

Hope was in short supply just ten weeks ago on this 10-kilometre spit of sand at the end of the migration route for tens of thousands of Canadian snowbirds.

The island was scrubbed clean of many older houses, trailers, shops and restaurants by 240 km/hr winds as Hurricane Ian claimed 146 lives in Florida, the state’s deadliest hurricane in 87 years.

SIGNS THINGS MAY RETURN TO NORMAL

But while there’s no overlooking the jaw-dropping devastation that still lines roads and overflows a giant debris dump south of the island, there’s no denying the phenomenal speed of demolition and reclamation amid signs things may return to normal much faster than anyone expected.

Huge swaths of beachfront development now just look like, well, a wider beach. There’s little evidence that enterprises thriving there before the hurricane ever existed. Even the foundations are gone.

Mind you, there's still the head-swivelling sight of boats dropped beside major roads or wedged deep into the mangroves, huge shrimp trawlers rammed together like impacted teeth and the beach’s picturesque 200-metre pier stripped down to a skeleton defined by storm-tilted concrete pillars.

At Bonita Bills, the bar U.S. President Joe Biden used for his photo op on tour after the hurricane blasted the area, upended boats bookend the open bar.

A 13-metre cruiser marks one end while a larger boat is rammed deep into the patio and there’s the surreal sight of staff scrambling in-between to get the place ready to reopen at a not-too-distance future date. (Federal Emergency Management Agency (FEMA) volunteers were in the bar last weekend to help residents file claims as the assistance of last-resort. Canadians using Florida as a second residence need not apply, they tell me.)

For an America often portrayed as a fading shell of its former self, what’s going on here appears to be a quiet miracle of emergency responsiveness and building-back-better energy.

And for the half-million-plus Canadians who own property in the state, that seems to confirm their choice for a winter getaway residence.

Pat and Sandie Barlow are Ottawa residents with a third-floor Fort Myers Beach condo overlooking a tiki bar, a favourite haunt of mine that now exists only as a pile of wood, metal and glass on the curb.

While their unit suffered no serious damage, I asked them if the hurricane changed their minds about owning a condo just a road-crossing away from another potential deadly storm surge.

“We knew the risks of locating on a barrier island,” Sandie said with a shrug. “But we have no intention of going elsewhere. We just love the Florida lifestyle too much.”

Sunning herself on the beach, which is open for walking but discouraged for swimming, long-time resident Cammie Lynch still finds it hard to look behind her at the cranes and bulldozers ripping apart the restaurants she used to patronize.

“There’s so much devastation, but we’re hopeful because there’s been so much progress,” she told me. “To see what they’ve accomplished has people thinking what was going to take five years to rebuild may take one.”

Even the beach sand is already being filtered to remove shards of glass and other sharp objects threatening the bare tourist feet walking it over the holidays, she said.

Indeed, progress is happening so quickly that to visit one week is to see a dramatic change the next.

One worker hammering up drywall inside a beach clothing outlet predicted the store would be ready to reopen long before there was enough tourist traffic to support it.

Meanwhile, damaged or destroyed houses are reportedly selling, even the ones that are now just vacant lots filled with sand, for millions of dollars despite what will almost certainly be a prohibitive boost in insurance premiums and condo fees.

Restaurants are reopening, live music is returning to the waterbombed pedestrian mall where bar bands used to perform and everywhere the sounds of demolition and rapid rebuilding gives optimism a booster shot.

“We rode out the storm on the island and to see the scale of devastation and death and loss of businesses . . . at the time we wondered if we would ever be able to get back,” Mayor Dan Allers told me Thursday. “I never could’ve believed so much progress was possible even a month ago.”

His message to Canadians: “We’re not going to have a season now, but we’re shooting for next year to be as close to normal as possible. Stay tuned, stay in contact and know there’s more hope every day.”

In a state defined in many Canadian minds as a political stage for the looming uncivil war between former president Donald Trump and potential rival Ron DeSantis, credit is due as American energy and ingenuity rush to make a Canadian getaway on Fort Myers Beach great (fun) again.