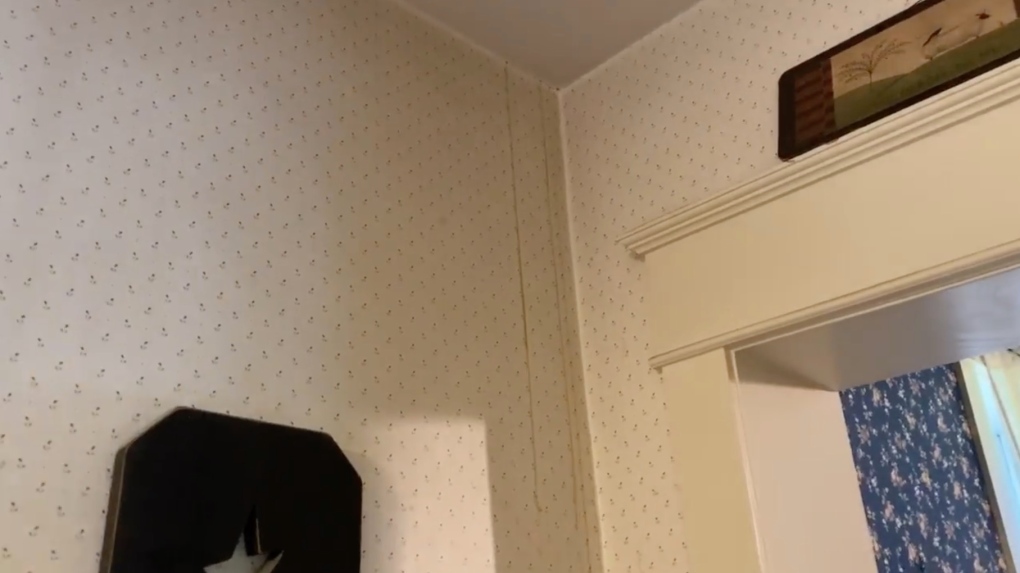 Homeowners Andrea and Justin Isabell found lines of honey running down the walls of their mudroom. (Courtesy Andrea Isabell)

A Pennsylvania couple didn't know they had house guests until lines of fresh honey started dripping down the walls of their home's mudroom.

Andrea Isabell and her husband Justin have lived in their 100-year-old home in Perkasie for five years and told CNN they haven't had any major issues with it, apart from run-of-the-mill repairs that come with owning an older home.

On Friday, Andrea said her neighborhood received heavy rain from Tropical Storm Fay, so they thought the streams coming down the wall of their mudroom were from water damage.

Saturday morning, the couple took a closer look and realized the liquid was actually fresh honey.

"We've never heard any buzzing or anything," Andrea said. "When we saw the stream coming down the wall, we just kind of worked our way up."

Andrea said she made it to her bedroom window and looked outside where she found honeybees entering and exiting an opening along her roof.

"And I thought there we go, there's their front door," she said.

In a video posted on Facebook, Justin offered a comical homeowner's tutorial called "How to tell if you have a bee issue."

"We noticed these streaks coming down our wall and we could not figure out what it was," he said. "So, with a very careful lick ...yup that's honey!"

The honey streams have traveled from the attic, through the second story, the main floor and now down to the basement, according to Andrea.

Allan Lattanzi, a general contractor and beekeeper for eight years, looked at the home Saturday and estimated the colony has anywhere from 20,000 to 30,000 bees.

"I think water got into the colony and washed the nectar out of the comb and made it more liquified and that's what was running down the wall," Lattanzi told CNN.

Andrea cleaned the honey from the floor to a midway point on the wall and said it doesn't seem to be a continuous stream.

She said her children think the stream is crazy and the family's dog certainly didn't seem to mind the fresh honey.

On Monday, Lattanzi will extract the colony from the Isabells' home and take it to the bee yard on his property.

"We know bees are endangered. We want to be able to save the colony and rehome them appropriately and carefully, but the damage done to the house to extract it was concerning," Andrea said.

During the assessment on Saturday, Andrea said Lattanzi estimates the repairs will cost about US$3,000 -- something she said her homeowner's insurance most likely won't cover.

"Right now, I feel mostly safe because the bees haven't gained access inside so they're just doing their thing and they're high up on the roof," Andrea said. "No one has been stung, so I guess that's why I feel confident and calm."