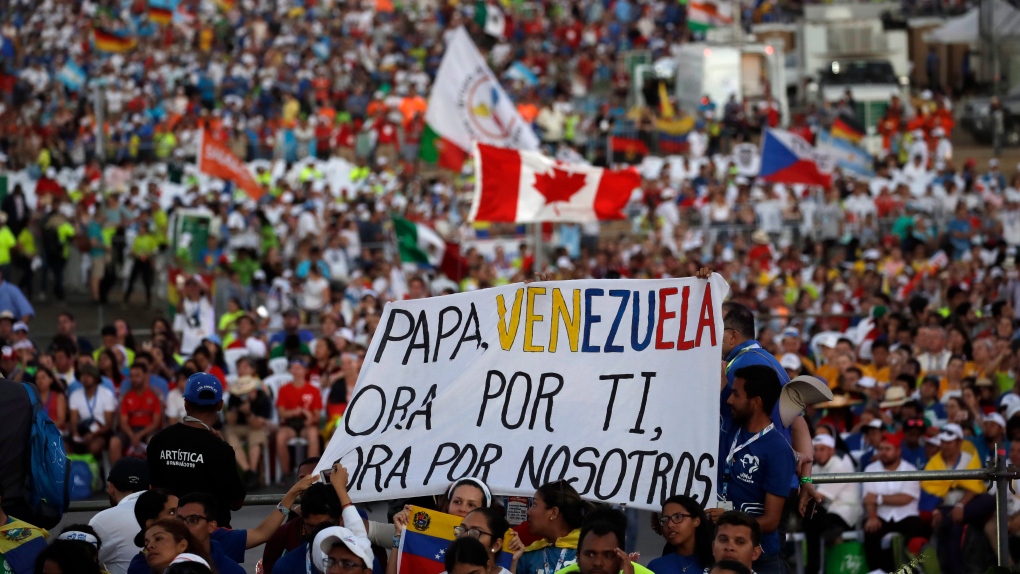 Pilgrims hold a sign that reads in Spanish "Pope, Venezuela prays for you, prays for us" as they watch Pope Francis during a vigil at Campo San Juan Pablo II in Panama City, Saturday, Jan. 26, 2019. (AP Photo/Alessandra Tarantino)

Top federal officials, perhaps Prime Minister Justin Trudeau himself, will be reaching out to key European allies to encourage them to put more pressure on Venezuela’s Nicolas Maduro, CTV News has learned.

Canada, the United States and 10 other countries in the Lima Group have already recognized Guaido, who declared himself interim president of the troubled South American country on Wednesday.

Canada played a key role in organizing that declaration. On Saturday, Trudeau spoke with Colombian Ivan Duque Marquez about the situation.

Russia, meanwhile, accused Canada and the U.S. of encouraging a coup.

For the estimated three million people who have fled Venezuela’s economic and political crisis in recent years, the growing support for Guaido gives them hope that they will one day be able to return home.

William Mesa is a medical student who was forced to leave Venezuela for Colombia four years ago.

“Many Venezuelans were eating on the streets from the garbage,” he told CTV’s Omar Sachedina in Bogota.

In addition to his studies, Mesa also volunteers at a clothing donation facility that helps Venezuelan newcomers, just as he was helped when he fled from neighbouring country.

If he’s lucky, he will sell enough lollipops at this busy #Bogota intersection to make the $6/day he needs to rent a small room.

They are among the 3,000,000 migrants who’ve fled Maduro’s Venezuela. 1/3 have settled in Colombia. pic.twitter.com/cFI12Qr2KN