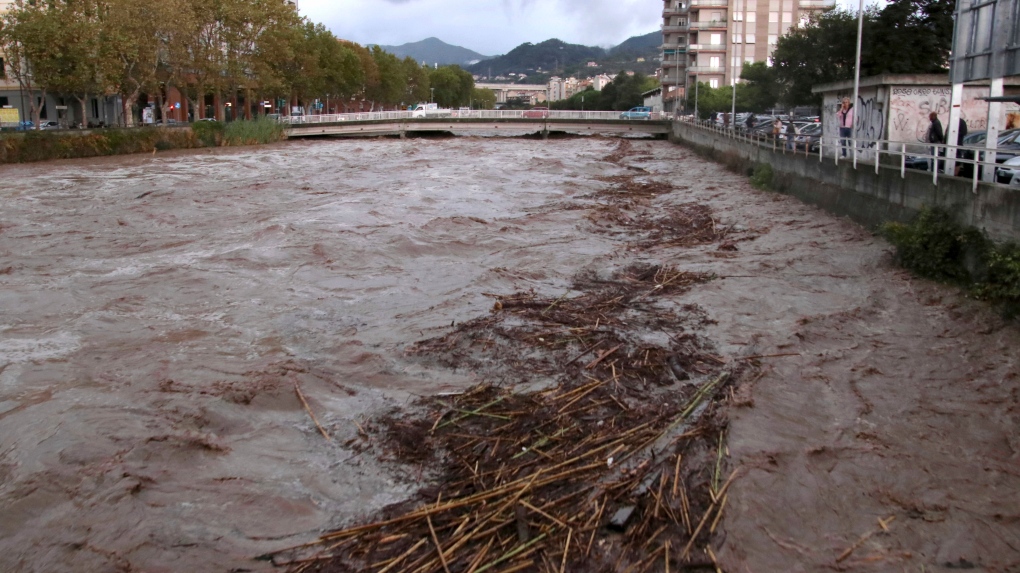 A view of a river near Savona in Northern Italy, swallowed after heavy rains in the region. Heavy rain battered Liguria, the northwest region of Italy bordering France, causing flooding and mudslides on Monday in several places. (Tano Pecoraro/LaPresse via AP)
MILAN -

Search teams have recovered seven dead, including a 3-week-old infant and a pair of young siblings, buried in mud and debris that hurtled down a mountainside and through a densely populated port city on the resort island of Ischia, officials said Sunday.

The Naples prefect confirmed that five people remained missing, and feared buried under the debris of an enormous landslide that struck Casamicciola before dawn on Saturday. Its force collapsed buildings and pushed vehicles into the sea.

The other victims were identified as the infant boy's parents, a 5-year-old girl and her 11-year-old brother, a 31-year-old island resident and a Bulgarian tourist.

"Mud and water tend to fill every space," Luca Cari, the spokesman for Italian firefighters, told RAI state TV. "Our teams are searching with hope, even if it is very difficult."

"Our biggest hope is that people identified as missing have found refuge with relatives and friends and have not advised of their position," he added.

The risks of landslides remained in the highest part of the town, near where heavy rainfall loosened a chunk of mountainside, requiring search teams to enter by foot, he said.

Small bulldozers first focused on clearing roads to allow rescue vehicles to pass, while dive teams were brought in to check cars that had been pushed into the sea.

"We are continuing the search with our hearts broken, because among the missing are also minors," Giacomo Pascale, the mayor of the neighboring town of Lacco Ameno, told RAI.

Pope Francis expressed his closeness to the people of Ischia during the traditional Sunday blessing in St. Peter's Square. "I am praying for the victims, for those who are suffering and for those who are involved in the rescue," he said.

The Naples prefect, Claudio Palomba, said on Sunday that 30 homes had been inundated and more than 200 people had been displaced. Five people were injured.

The massive landslide before dawn on Saturday was triggered by exceptional rainfall, and sent a mass of mud and debris hurtling through the port of Casamicciola, collapsing buildings and sweeping vehicles into the sea.

One widely circulated video showed a man, covered with mud, clinging to a shutter, chest-deep in muddy water. Another family escaped a home on the mountainside that appeared Sunday to teeter over a precipice, the daily Corriere della Sera reported.

The island received 126 millimeters (nearly five inches) of rain in six hours, the heaviest rainfall in 20 years, according to officials. Experts said the disaster was exacerbated by building in areas of high risk on the mountainous island, which is also in an seismically active zone. Two people were killed in 2017 when a 4.0-magnitude quake struck Casamicciola and Lacco Ameno.

"There is territory that cannot be occupied. You cannot change the use of a zone where there is water. The course of the water created this disaster," geologist Riccardo Caniparoli told RAI. "There are norms and laws that were not respected."

Vincenzo De Luca, president of the Campagna region where Ischia is located, said houses in areas at risk must be demolished, suggesting they had been built without necessary permits.

"People need to understand that you cannot live in some areas. There is no such thing as the necessity (to build) illegally," De Luca told RAI. "Buildings in fragile zones should be demolished."

The Italian government declared a state of emergency for the island during an urgent Cabinet meeting Sunday, earmarking 2 million euros (nearly US$2.1 million) for the rescue and to restore public services.

"The government expresses its closeness to the citizens, mayors and towns of the island of Ischia, and thanks the rescue workers searching for the victims," Premier Giorgia Meloni said in a statement.