Blinken says Russia could move on Ukraine 'on short order' 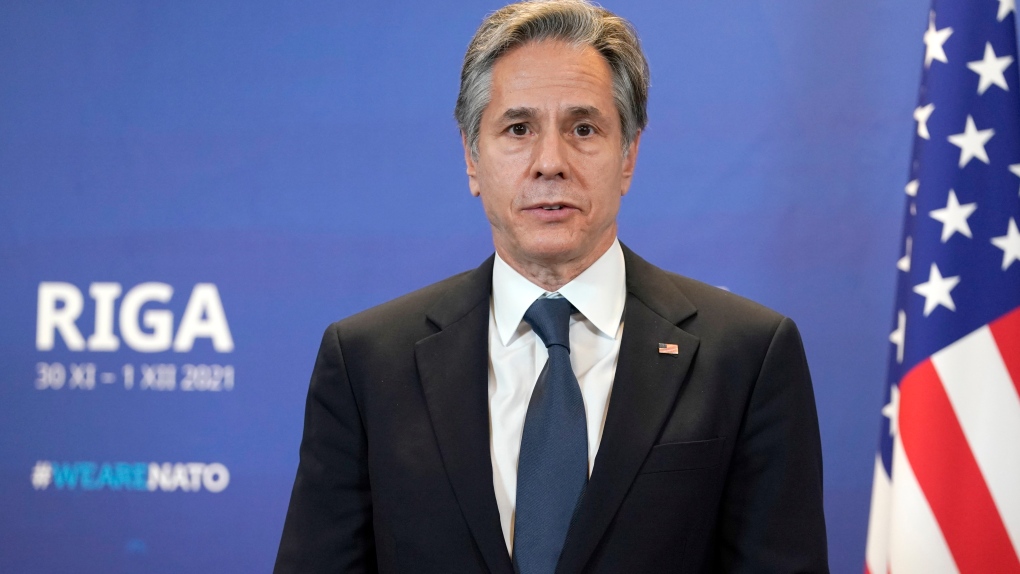 RIGA, LATVIA -- U.S. Secretary of State Antony Blinken warned Wednesday that President Vladimir Putin could quickly order an invasion of Ukraine if he had a pretext for doing so but that NATO allies stand ready to inflict heavy sanctions on Russia's economy if that happens.

Tensions over a Russian troop buildup along the border of Ukraine have been a focus of Blinken's weeklong Europe trip and topped the agenda of his meeting Wednesday with NATO counterparts in Latvia. The Ukrainian government is seeking to align with NATO and the West.

"We don't know whether President Putin has made the decision to invade. We do know that his is putting in place the capacity to do so on short order should he so decide," Blinken told reporters in Riga, Latvia's capital. "We must prepare for all contingencies."

"We're also urging Ukraine to continue to exercise restraint because, again, the Russian playbook is to claim provocation for something that they were planning to do all along," he said.

Blinken said the U.S. has "made it clear to the Kremlin that we will respond resolutely, including with a range of high-impact economic measures that we've refrained from using in the past." He gave no details on what kind of "high-impact" sanctions were under consideration if Russia did invade Ukraine.

The European Union's Parliament approved a nonbinding resolution in April to cut off Russia from the so-called SWIFT system of international payments if its troops entered Ukraine.

Such a move would go far toward blocking Russian businesses from the global financial system. Western allies reportedly considered such a step in 2014 and 2015, during earlier Russian-led escalations of tensions over Ukraine. Then-Russian Prime Minister Dmitry Medvedev said at the time the Russian response to that financially crippling move would be "without limits."

Apart from targeting Russia for sanctions, Blinken said that "NATO is prepared to reinforce its defenses on the eastern flank." He did not elaborate. The military organization already has forces stationed in the Baltic states -- Estonia, Latvia and Lithuania -- and Poland.

Blinken is scheduled to meet Thursday in Sweden with Russian Foreign Minister Sergey Lavrov. He said he would encourage Russia's top diplomat to return to talks under the "Normandy" format, with France and Germany.

"There is a diplomatic path forward. We are certainly not looking for conflict," Blinken said.

A 2015 peace deal brokered by France and Germany helped end large-scale battles in eastern Ukraine sparked after Russia annexed the Crimean Peninsula the previous year. But efforts to reach a political settlement failed and sporadic skirmishes continue along the tense line of contact.

While in Stockholm on Thursday, Blinken also plans to hold talks with Ukrainian Foreign Minister Dmytro Kuleba on the sidelines of a minister-level meeting of the Organization for Security and Cooperation in Europe.

Cook reported from Brussels. Ellen Knickmeyer in Washington contributed to this report

This version corrects the spelling of Russian minister Lavrov's first name to Sergey, not Sergei.