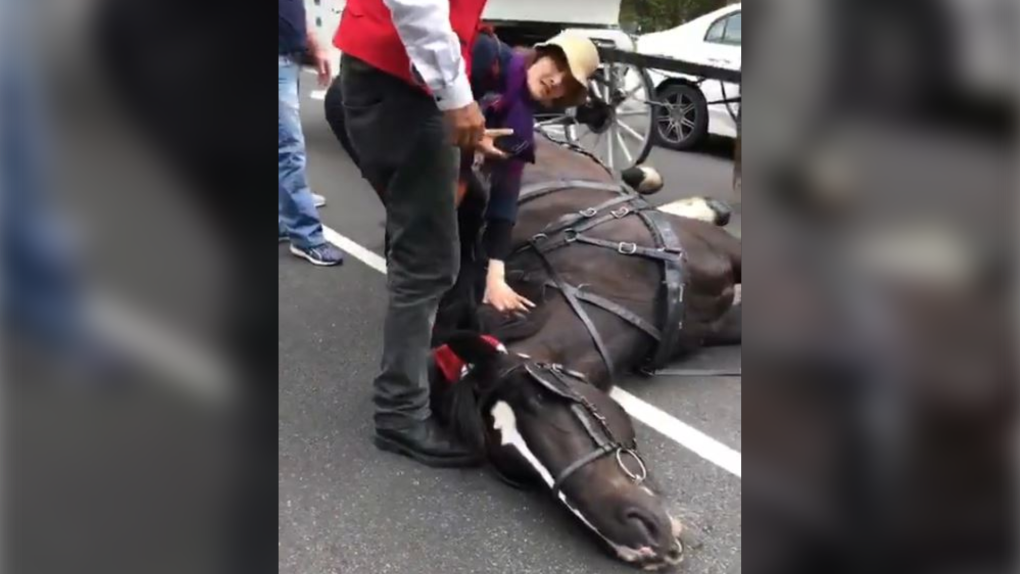 An animal rights groups in Australia is asking for a ban on horse-drawn carriages in Melbourne after video of a driver repeatedly kicking a collapsed horse went viral. (Krista Knight)

TORONTO -- An animal rights groups in Australia is asking for a ban on horse-drawn carriages in Melbourne after a video of a driver kicking a collapsed horse went viral.

In the clip posted to Facebook on Dec. 15, the carriage driver can be heard telling the woman filming to “p*** off” as she tried to intervene. The horse, named Tuesday, had collapsed and was apparently unable to stand while still chained to the carriage. After a few minutes, the horse was untethered and able to right itself. But not before a barrage of aggression from the driver.

“Get up! F****** lazy b****,” the driver is heard saying. He repeatedly tried to lift the horse from its neck, kicking its head and back.

A Melbourne-based group opposed to horse-drawn carriages told CTVNews.ca in a Facebook message that they have received no word from local council or state government after complaints about the incident.

“We hope this awful incident will finally make them stop passing responsibility to each other and instead work together to get horse-drawn vehicles banned,” wrote a spokesperson for Melbourne Against Horse-Drawn Carriages, adding that the viral clip is “not an isolated incident.”

In interviews with local news, Unique Carriage Hire stood by the driver.

“It is out of character, but it was a very stressful situation,” Dean Crichton from Unique Carriage Hire told 7News. “I don’t condone his language but at times like that, help is better than negative comments.”