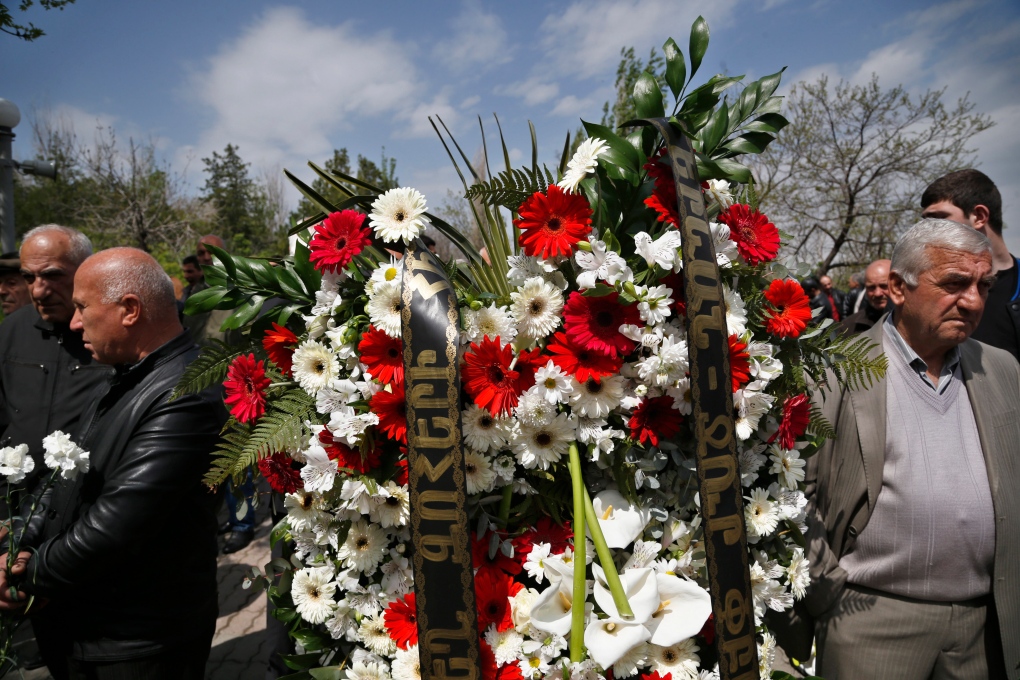 Armenians gather to lay flowers at a memorial to victims of massacres as they mark the centenary anniversary of the mass killings, in Yerevan, Armenia, Thursday, April 23, 2015. (AP / Sergei Grits)

VAGHARSHAPAT, Armenia -- Life had barely begun for Khosrov Frangyan when he knew the fear of being an Armenian in the Ottoman Empire.

A century later, the memories still torment him.

"Somebody told us that Turks will come and start killing us," said the 105-year-old, recalling how he and fellow villagers hid atop a mountain. "Turkish soldiers came and wanted to come up ... We did not have weapons, so we started to throw stones and rocks on them."

Frangyan and his family managed to escape by boat to Beirut and then on to Armenia itself. He now lives with his children and grandchildren in this city 20 kilometres outside the capital. But an estimated 1.5 million Armenians died in the massacres, deportations and forced marches that began in 1915.

Armenia, many scholars and some countries call it the 20th century's first genocide. Modern Turkey, the successor to the Ottoman Empire, vehemently rejects the charge. Whatever it is called, the violence gouged a psychic wound so deep that it pains Armenians born generations later.

The annual April 24 commemorations mark the day that some 250 Armenian intellectuals were rounded up in what is regarded as the first step of the massacres. For Armenians it is always an emotional event. But this year's centennial is especially fraught.

As the flame of living memory flickers out -- Armenia counts only 28 residents as survivors of the massacre -- demands mount for its recognition as genocide. Armenia notched some victories in that campaign this year. Pope Francis recognized it as genocide, as did the European Parliament. Kim Kardashian's visit to her ancestral homeland drew wide attention to the issue in celebrity-enamoured circles that normally would pay little heed to history.

Yet Armenians are fuming that one major prize has eluded them: genocide recognition by the United States. Great bitterness followed the news that President Barack Obama would not use the centennial to call the killings genocide, despite his campaign promise in 2008 to do so. Armenians believe he is letting Turkey's strategic value as a NATO member -- and its role in absorbing refugees from the Syrian conflict -- fog his moral compass.

The U.S. is sending a relatively low-visibility delegation to the commemorations, led by Treasury Secretary Jacob Lew. But Russia will be represented at the highest possible level by President Vladimir Putin and France by President Francois Hollande. France has been the most vigorous European country in the genocide-recognition campaign, and Hollande's government is even pushing for a law punishing genocide denial.

Turkey, in turn, is resentful. It recalled its ambassador from the Vatican, and bristled at suggestions that it chose to commemorate the centenary of the Battle of Gallipoli on the same day in order to draw attention away from Armenia.

"An evil front is being is being formed before us," Prime Minister Ahmet Davutoglu said after Pope Francis' announcement.

But this week Davutoglu sounded a conciliatory note, announcing that a service commemorating Armenian victims would be held at the Armenian Patriarchate in Istanbul, and expressing condolences to descendants of the victims.

Friday's main commemoration ceremonies are being held at the memorial complex on a hill that looms over the capital Yerevan. The Armenian Apostolic Church, the country's dominant religion, on Thursday held services to canonize all victims.

In Yerevan, an estimated 60,000 people jammed the capital's main square on Thursday night for a free concert by System of a Down, a metal band of Americans of Armenian descent which has drawn attention for advocating the deaths be called genocide.

Armenia contends the movement toward genocide recognition is irreversible.