Anxiety and anger grip press in Mexico after spate of murders 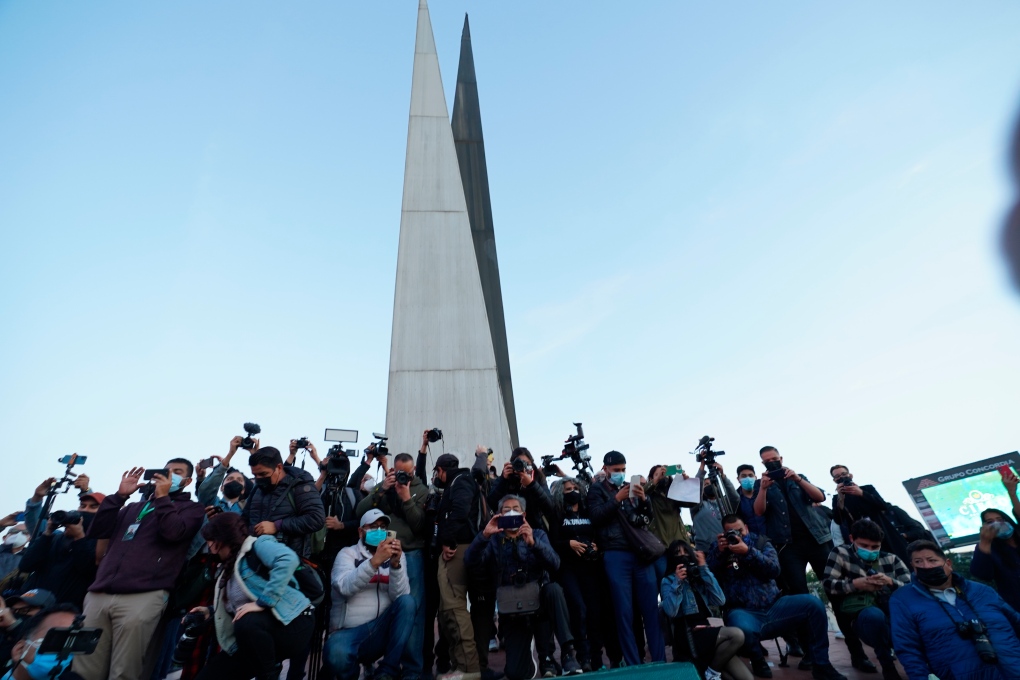 Journalists in Mexico are fed up.

In a country whose climate is infamous for being exceedingly hostile toward journalists, a spate of murders has disillusioned an already cynical press corps, prompting journalists to publicly speak out about the dangers they face on the job.

Across the country, journalists and human rights advocates demonstrated on Tuesday night in favour of press freedom. They held signs that read "journalism at risk" and paid tribute to their fallen colleagues -- those who have lost their lives for simply reporting the news.

Just this month, three reporters have been killed in the Latin American country. Journalist Lourdes Maldonado Lopez, who told Mexican President Andres Manuel Lopez Obrador in 2019 that she feared for her life, was shot to death inside her car on Sunday; photojournalist Alfonso Margarito Martinez Esquivel was shot in the head outside his home on January 17; and Jose Luis Gamboa, the founder and editor two news websites, was killed on January 10.

The Committee to Protect Journalists considers Mexico to be one of the most dangerous countries in the world to practice journalism. By the organization's count, nine journalists were murdered in 2021. Of those nine, CPJ has confirmed that three of those journalists were killed in direct reprisal for their work.

Somehow, in recent weeks, the situation has managed to become even more dire, CPJ Latin America and Caribbean program coordinator Natalie Southwick told me on Wednesday. Southwick said that journalists in the country, especially those who cover corruption or organized crime, are currently "thinking furiously" about "whether what they're doing is worth the risk to their families."

A disturbing detail in a Guardian story from earlier this month illustrates the level of worry: "In some regions journalists have become so fearful of being abducted and killed that they take DIY dental impressions and leave them in the freezer at home before going out to report so relatives can identify their remains."

Indeed, fear is gripping even the most seasoned Mexican journalists. "I've never felt this worry, not just for me, but a fear for others, for those people I've been working with for 20 years," Aline Corpus, a Tijuana correspondent, told NYT. "You feel like an easy target," Corpus added.

"It's difficult to put into words what the killings have done," Vicente Calderón, editor of news site Tijuana Press told CPJ. "You would think that, as journalists who go out every day to cover crime and violence in this city, we would have built up some kind of immunity, but even though we have gotten used to [violence], it has still been a terrible week with lots of introspection."

CNN Mexico City producer Karol Suarez writes: "Here in Mexico, a sense of anxiety and anger has gripped the journalism community. The lack of concrete actions from authorities has created an atmosphere of impunity and bitterness among all. Imagine telling the president of your country that you fear for your life, and a few years later, you get killed while arriving home; it's awful, right? Something failed, and it has been failing for more than two decades. Journalists in Mexico are seen as the enemies of politicians and other powerful people. But even with the fear and dangerous circumstances, journalists will continue doing their jobs..."

Southwick told me that "there is no doubt" that the recent killings are having a "chilling" effect on journalism. She said that the violence and threats journalists regularly face in the country have contributed to ever-growing "silence zones," or "whole areas of the country where there is very little news coverage because it is not safe." The few journalists in such areas, she said, "cover sports or celebrity news or topics that are not going to upset the local organized crime groups." A representative for Article 19, a media advocacy group, put it like this to the NYT: "What we call zones of silence are being imposed, they're spreading, they're propagating like a pandemic..."

Since 2012, safety mechanisms from the government have been in place to help keep journalists safe. A program for human rights advocates and journalists that operates under Mexico's Interior Secretariat is supposed to evaluate threats and respond appropriately. But a 2019 CPJ report found that many journalists find the response to be "insufficient or ineffective."

Southwick told me that they've heard from journalists on the ground who feel that authorities are dismissive of the threats they face or are slow to respond. "The ongoing brutality against the journalists in this country is a direct consequence of the authorities' unwillingness and inability to combat the festering impunity that fuels these killings," Jan-Albert Hootsen, CPJ's Mexico Representative, said in a statement. The group is calling on the government to do more.