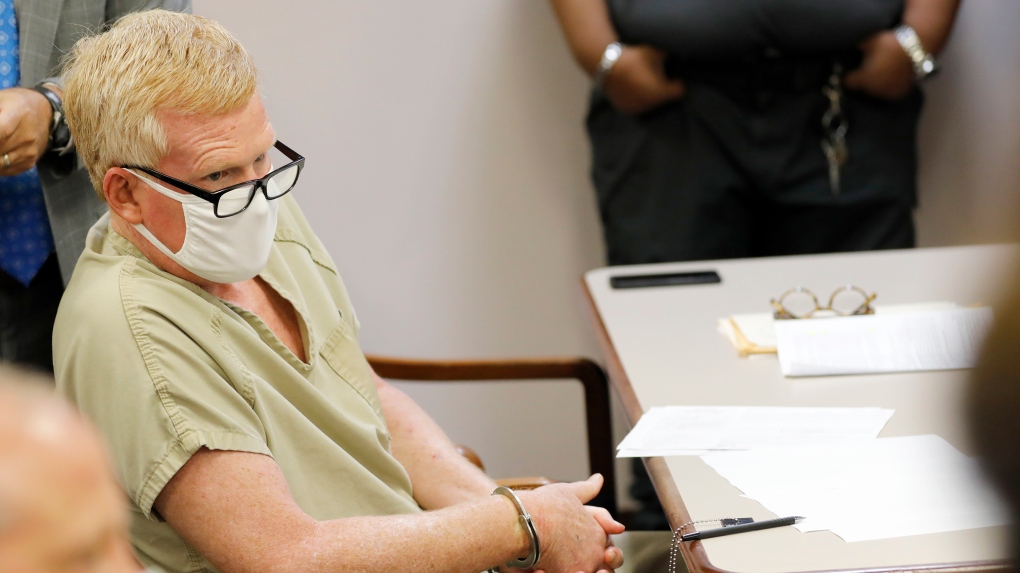 Newly released documents allege that Alex Murdaugh, pictured here, on September. 16 in South Carolina coordinated with his former housekeeper's family to sue himself for insurance money that he then pocketed for himself. (Mic Smith/AP)

Newly released documents allege that Alex Murdaugh, a once-prominent South Carolina attorney now embroiled in scandals including alleged life insurance fraud, coordinated with his former housekeeper's family to sue himself for insurance money that he then pocketed for himself, according to a pair of affidavits released Saturday.

Murdaugh was arrested Thursday in Florida on suspicion of misappropriating settlement funds in connection with Gloria Satterfield's death, authorities said.

Satterfield, who worked for the Murdaughs for more than two decades, died following what was described as "trip and fall accident" at the Murdaugh home in 2018, according to attorney Eric Bland, who is representing her estate. Bland filed a lawsuit in September against Murdaugh on behalf of Satterfield's estate seeking the money they say they are due.

According to the affidavits released Saturday by the South Carolina Enforcement Division (SLED), "Mr. Murdaugh coordinated with (Gloria) Satterfield's family to sue himself in order to seek an insurance settlement with the stated intent to give the proceeds to the Satterfield family to pay for funeral expenses and monetary compensation for Satterfield's children." Murdaugh deposited more than nearly US$3 million into an account he owned, the affidavits said.

In an email to CNN, Bland disputed SLED's statement.

"These were legitimate claims that were brought in connection with Gloria Satterfield's death," he wrote.

Satterfield died, he wrote, after Murdaugh's four dogs tripped her, and her estate made an "appropriate negligence claim."

"The claim was not fabricated and Alex appropriately referred them to an attorney," he wrote. "The estate was unaware of the extremely close relationship though between (Cory) Fleming and Alex Murdaugh which was not fully disclosed."

CNN has also reached out to Murdaugh's attorneys for comment on the affidavits. After Murdaugh's arrest Thursday, his attorneys, Dick Harpootlian and Jim Griffin, released a statement saying he intends "to fully cooperate with this investigation, as he has with the investigation into the murder of his wife and son.

"He deeply regrets that his actions have distracted from the efforts to solve their murders," the statement said.

Last month, SLED announced it was opening a criminal investigation into Satterfield's death and the handling of her estate, following a request from the Hampton County coroner that highlighted inconsistencies in the ruling of her death, as well as information gathered during SLED's other investigations involving Murdaugh, the agency said.

The investigation into Satterfield's death follows months of legal and personal challenges for Murdaugh.

In early September, Murdaugh was shot in the head and, authorities said, later admitted that his shooting was a conspiracy with a former client to kill him so his only surviving son could collect an insurance payout.

Murdaugh's shooting came less than three months after he called authorities to report he found his wife and youngest son shot dead at their home.

On Friday, Murdaugh waived an extradition hearing in Florida and a day later returned to South Carolina to face charges related to the misappropriation of settlement funds in connection with Satterfield's death.

The affidavits released Saturday describes what authorities say happened after Satterfield's death. Murdaugh recommended an attorney to the family, and that attorney brokered insurance settlements of approximately US$4.3 million, one affidavit said.

A settlement agreement stipulated that US$2,765,000 was for the Satterfield family, the affidavit said.

"The Satterfield family were never notified of the settlement nor received any of the proceeds from them, and the settlement agreement was not properly filed in the court record," the affidavit said.

Murdaugh directed the attorney to write a check to a bank account created and owned by Murdaugh titled "Forge," in order "to deprive the Satterfield family of insurance settlements owed to them by converting the US$2,961,911.95 to Mr. Murdaugh's own use," according to the affidavit. He had previously deposited US$403,500 to the same account as part of a preliminary settlement agreement, according to a second affidavit.

While there is a legitimate company called Forge Consulting LLC that handles insurance settlements, it is not affiliated with the Satterfield settlement nor the "Forge" account owned by Murdaugh, the affidavit said.

"Mr. Murdaugh titled the account 'Forge' as a misrepresentation in order to conceal misappropriation of the funds in question," the affidavit added.