Warning: The details of this story may be graphic to some readers.

TORONTO -- Last June I received a direct message on Twitter from a man named Mark Henderson. He wanted to meet in person but his name didn’t register with me, and so we opted to speak on the phone instead.

Just minutes into that call, I realized this was the Mark Henderson I spent years looking for. The first known survivor of serial killer Bruce McArthur.

Since that conversation, we’ve been meeting regularly and I have pored through decades-old court transcripts to unravel Henderson’s extraordinary story of survival, and of guilt, well before men started vanishing from Toronto’s Gay Village.

It’s a story that McArthur tried to hide for years. The 69-year-old serial killer is serving a life sentence for the murders of eight men, between 2010 and 2017. Henderson is still haunted by the memory of the day McArthur beat him with a pipe.

“Every muscle in his face was clenched and he had the look like a Komodo dragon. He just was a reptile. He was full of rage,” Henderson recounted in an interview with W5.

“I remember feeling the indentation in my skull. He had popped my skull in. I have a nursing background and I see cerebral spinal fluid and blood coming down. And I think I'm going to lose consciousness in a matter of seconds. And he was not going to stop.”

That attack happened in 2001 and McArthur immediately turned himself in to police. He pleaded guilty, but his conviction was wiped from his criminal record.

In 2014, during a lull in his killing spree, McArthur applied for -- and was granted -- a pardon. In the eyes of the justice system, the attack against Henderson never happened. In fact, it only resurfaced when McArthur was charged with the string of murders.

That’s when I first started trying to find Henderson, a man who has been an anonymous footnote in the story of one of Canada’s most notorious string of killings.

The court transcripts of the 2001 attack do not tell the full story. There are legitimate questions about whether the course of history could have been changed, had the crime been taken more seriously.

It was broad daylight on October 31, 2001. Henderson was walking into his apartment building when McArthur came running up behind him. Henderson held the door for him, thinking McArthur was heading to the superintendent’s office just down the hall.

As Henderson was unlocking his apartment door, McArthur pulled out a pipe and beat him, repeatedly on the head. Henderson suffered a fractured skull and finger, and a damaged hand. The police evidence photos of those injuries have been sealed by the courts ever since. But with Henderson’s permission, W5 managed to get them unsealed. 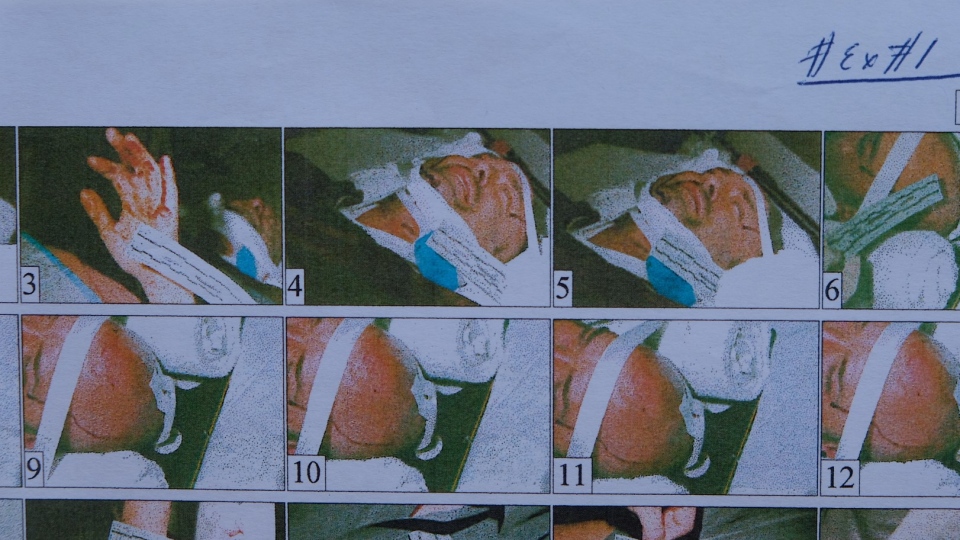 When the case went to trial in 2003, McArthur offered no explanation for the attack and apologized for the “pain and suffering.” He could’ve been sentenced to 10 years in jail. Instead he didn’t even serve one day. His sentence was one year house arrest, a two-year ban from entering the Gay Village and three years’ probation

The transcripts of the trial paint a “blame the victim” narrative. Even though he was the victim and this attack was completely unprovoked, Henderson was chastised for “foolishly” letting McArthur into the apartment building.

Much was made about the fact that Henderson had a reputation for being a “male hustler,” a now outdated term for sex worker. However, there was no mention that Henderson was a nurse, a model and an actor.

“I know that there was a lot said about me being an escort. By 2001, I was 10 years sober. I wasn't gay-bashed. I was bashed-bashed. It was probably looked at as two guys on Halloween fighting. Happens every year.”

When police first started investigating the disappearances of men in the village in 2012, Bruce McArthur was brought in for questioning. No one knew it at the time, but he had already killed three men. McArthur’s criminal record didn’t raise any flags with police because all that came up about the attack on Henderson was a minor assault with no jail time served. By the time he became a major suspect, he’d had the conviction erased with a pardon.

“MacArthur was already flagged as having known two, if not all three of the disappeared people and having been a violent person who'd beat up Mark Henderson. It's just shocking to me that they didn't name him as the prime suspect, let alone one of the key suspects. Had they given [McArthur] at least a year or so in jail, then it would have been taken a lot more seriously. That’s part of the problem. It wasn’t considered a major criminal record.”

Henderson sadly says as men continued to disappear from the village, he tried to warn police about McArthur. But he is racked by guilt that he didn’t do more.

“I should've just stood on the corner and screamed until somebody listened: “I think there's a credible threat. People are missing and this is the person I think it is.’”

It wasn’t until eight men were dead until police arrested Bruce McArthur.

Watch W5’s Victim 1 on Saturday at 7 p.m. EST for the full interview with Henderson as host Avery Haines digs deeper into his story and the men killed by McArthur.