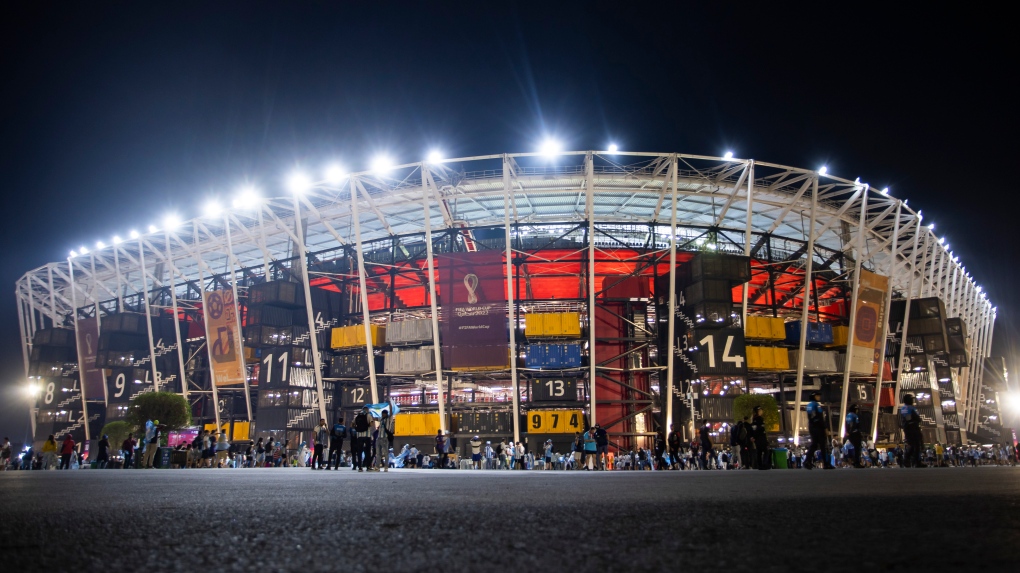 Of the seven stadiums Qatar built for the World Cup, one will disappear after the tournament.

That's what the games' organizers have said about Stadium 974 in Doha -- a port-side structure with more than 40,000 seats partially built from recycled shipping containers and steel.

Qatar says the stadium will be fully dismantled after the World Cup and could be shipped to countries that need the infrastructure. Outside experts have praised the design, but say more needs to be known about what happens to the stadium after the event.

"Designing for disassembly is one of the main principles of sustainable building," said Karim Elgendy, an associate fellow at the London-based Chatham House think tank who previously worked as a climate consultant for the World Cup.

"It allows for the natural restoration of a building site or its reuse for another function," he said, adding that a number of factors need to considered "before we call a building sustainable."

Buildings are responsible for nearly 40 per cent of the world's energy-related carbon emissions. Of that, about 10 per cent comes from "embodied" carbon or the greenhouse gas emissions related to the construction, maintenance and demolition of buildings.

Qatar has faced international criticism for its treatment of low-paid migrant workers who built over US $200 billion worth of stadiums, metro lines and other infrastructure for the World Cup. Qatar says the criticism ignores labor reforms enacted in recent years.

Stadium 974, named after Qatar's international dialing code and the number of containers used to build the stadium, is the only venue that Qatar constructed for the World Cup that isn't air-conditioned. During a match Friday in which Switzerland defeated Serbia, the air was noticeably more humid and hot than in other venues.

The stadium is hosting only evening matches, when temperatures are cooler.

Fenwick Iribarren Architects, which designed Stadium 974 and two other World Cup stadiums, says the idea was to avoid building a "white elephant," a stadium that is left unused or underused after the tournament ends, as happened following previous World Cups in South Africa, Brazil and Russia.

Qatar says it has developed plans for the other six stadiums after the games are over. Many will have a number of seats removed.

The multi-coloured shipping containers are used as building blocks for Stadium 974 and also to house facilities such as restrooms in the interior of the structure. Like giant Lego blocks, the bright red, yellow and blue corrugated steel boxes appear suspended between layers of steel. The design gives the stadium an industrial feel.

Qatar has not detailed where the dismounted stadium will go after the tournament or even when it will be taken down. Organizers have said the stadium could be repurposed to build a venue of the same size elsewhere or multiple smaller stadiums.

Where its components go matters because of the emissions implicated by shipping them thousands of kilometers away.

Carbon Market Watch, an environmental watchdog group that investigated Qatar's World Cup sustainability plans, said whether Stadium 974 has a lower carbon footprint than a permanent one comes down to "how many times, and how far, the stadium is transported and reassembled."

FIFA and Qatar acknowledge that in a report estimating the stadium's emissions. If the stadium is reused only once, they estimate its emissions would be lower than a permanent one as long as it is shipped fewer than 7,000 kilometers (about 4,350 miles) away.

If it's repurposed more than once, it could be shipped farther and still be less polluting than a permanent venue, they said, because of how energy-intensive building multiple new stadiums is.

Qatar's Supreme Committee for Delivery and Legacy, the organizing committee for the World Cup, did not respond to a request for more information about plans after the tournament.

The report also didn't factor in operational emissions -- or those produced from running a building -- once the stadium is repurposed because standards vary in different countries, FIFA and Qatar said.

"The energy required for dismantling and shipping the building components will obviously need to be estimated," Elgendy said, "but it is unlikely to outweigh the carbon embodied in the building materials."

For now, the stadium's design isn't lost on spectators. On any game night, fans entering and leaving the stadium take selfies against its modern, industrial facade. The temporary stadium is hosting seven games in total -- with the final one on Monday between Brazil and South Korea.

Jhonarel Minoza, a 42-year-old Qatari resident originally from the Philippines, said she and her sister wanted to see a game in each of the seven stadiums.

Minoza, an administrative officer who has lived in Qatar for five years, said she had heard about Stadium 974's unconventional design before the game she attended on Friday.

"I was really eager to know how they built it," Minoza said. "When I came inside here, I was just checking how they did that."