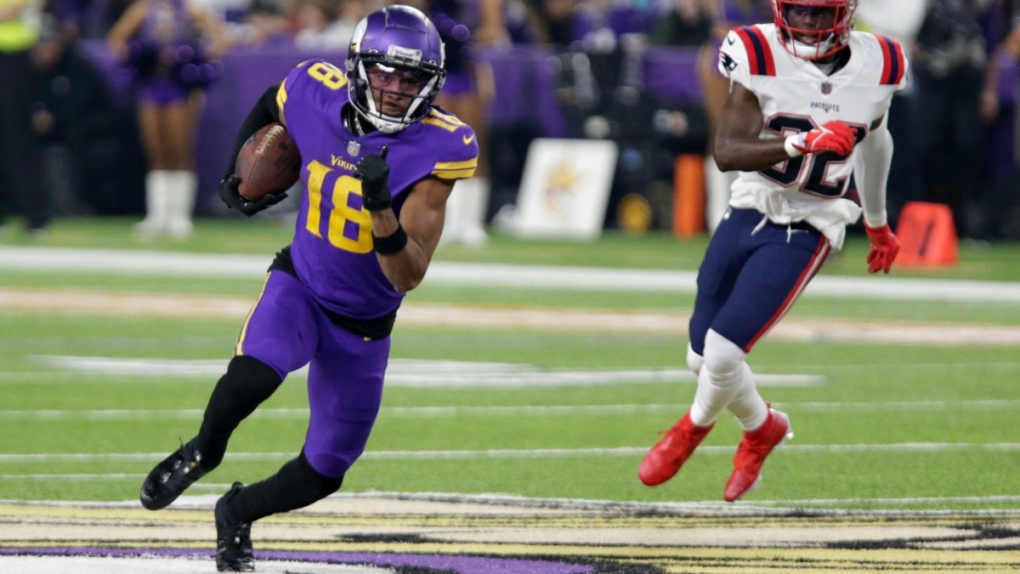 The Minnesota Vikings have quickly become a confident and resilient team under rookie coach Kevin O'Connell and his staff, and they sure showed it in this short week.

Kirk Cousins threw for 299 yards and three touchdowns, the last a go-ahead score to Adam Thielen with 9:34 left to push Minnesota past the New England Patriots in a 33-26 victory Thursday night.

Justin Jefferson had 139 receiving yards and one of the touchdown passes from Cousins, who delivered the clutch performance against a formidable defense the Vikings (9-2) needed to bounce back from a blowout loss four days before.

They rebounded multiple times within the game, too. After an overthrow by Cousins was intercepted by Jonathan Jones and returned 55 yards to set up a field goal in the first quarter, the Vikings scored on five straight possessions excluding a kneel-down to end the first half.

Mac Jones passed for a career-high 382 yards and two scores to snap a lagging offense to life for the Patriots (6-5), but they ran out of steam down the stretch. Their fourth quarter included two three-and-out punts, a turnover on downs at the Minnesota 39 and a brief desperation last drive.

Jones found Hunter Henry for a wide-open 37-yard touchdown pass to start the second half for a 23-16 lead. Kene Nwangwu scored on a 97-yard kickoff return to strike right back for the Vikings.

Jones -- who has completed more than 77% of his passes over the last two games -- appeared to hit Henry for another score on the next possession with a twisting catch at the goal line that was ruled a touchdown on the field. The replay reversal to an incomplete pass forced the Patriots to settle for Nick Folk's fourth field goal of the game.

"My hand was under it even when it hit the ground," Henry said.

Another vital call went the Vikings way a few minutes later when Pierre Strong Jr. was called for running into punter Ryan Wright. With a fresh set of downs, Cousins and the Vikings cruised up the field for the go-ahead touchdown.

"We definitely had to come in and show people that last week, it just wasn't our week," Jefferson said.

O'Connell also got the bonus of a win over Bill Belichick, who drafted him with the Patriots in 2008.

"This one means a whole heck of a lot, just because I have so much respect for that organization and coach Belichick," O'Connell said.

The Patriots allowed just three points in each of their last two games and brought the NFL sack leader Matt Judon to the stadium where the Vikings were decimated by Dallas on Sunday while Cousins took a career-high seven sacks.

With standout left tackle Christian Darrisaw sidelined by a concussion, the Vikings gave backup Blake Brandel plenty of extra help and put Cousins in far more favorable situations with shorter drops and quicker throws. The Vikings had 231 yards in the first half, more than the Patriots allowed in the previous two games combined.

Jefferson had his footprints all over this game from the start, when his 3-yard reception on a crossing route in the end zone capped the opening drive. He made catch after improbable catch in tight coverage, including a 36-yard grab on a go route right before he was sandwiched by Jonathan Jones and Devin McCourty. Thielen's touchdown came on the next play.

"His ability to not hear footsteps and not alligator-arm it but bring it in and get popped, that's one of his many traits," Cousins said.

Jefferson set the NFL record for most receiving yards in a player's first three seasons to pass Randy Moss. Jefferson has hit the 100-yard mark in 21 of 44 career games, and this one was one of his finest given the way Belichick's defenses frequently focus on taking star players out of the mix.

"Kevin did a good job," Belichick said. "They made a few more plays than we did."

Patriots: Host the Buffalo Bills on Dec. 1 in another Thursday night game.

Vikings: Host the New York Jets on Dec. 4. They can clinch the NFC North division with a win and some help.