Herta cruises past his father with Laguna Seca victory 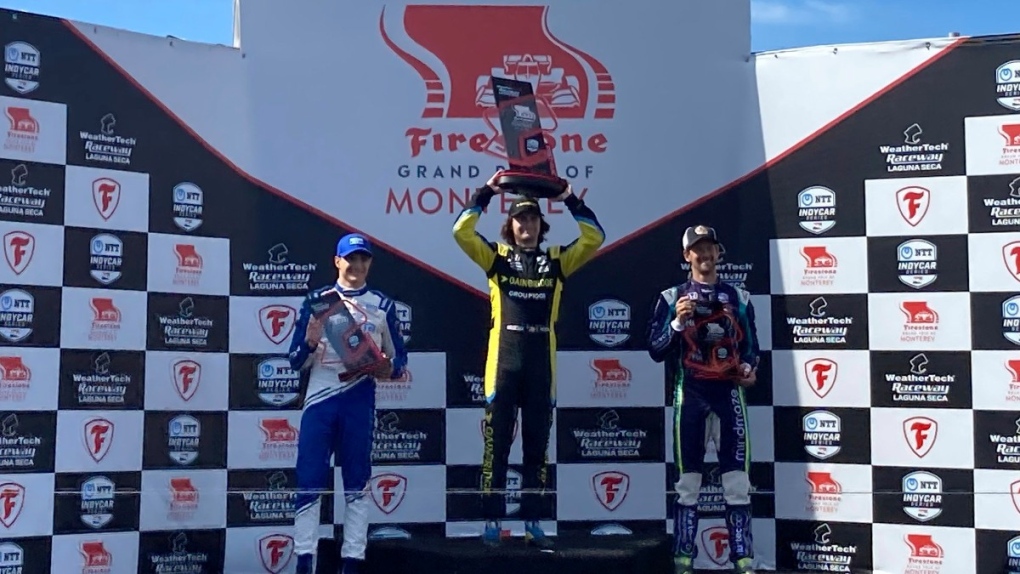 The new faces of IndyCar dominated at Laguna Seca, where Colton Herta won the race, Alex Palou moved an easy Sunday drive away from the championship and Romain Grosjean was treated like a rock star.

Herta routed the field -- and ran over "either a squirrel or bunny" while doing so -- as he won from the pole Sunday, same as he did in 2019 when IndyCar last raced the sprawling permanent road course. He later congratulated the dead animal embedded under his car for its first career IndyCar victory.

"He's done a lot more than a lot of IndyCar drivers," Herta joked.

But for the actual driver it was his second win of the season and Herta tied his father, Bryan, with a pair of wins at Laguna Seca.

"This place is so awesome, it's my favorite track in North America," the Andretti Autosport driver said. "It's an amazing track for me and my family, it's been so good to us."

Laguna Seca was site of Herta's fifth career victory in three seasons, which moved him one past his dad's tally. Bryan Herta won four races spanning 13 seasons and was masterful at Laguna Seca, where he won back-to-back in 1998 and 1999 and had a career average finish of seventh.

Now the strategist for his son, Bryan Herta beamed from the Andretti timing stand.

"He feels like a veteran when you work with him now," Bryan Herta said. "You know, it's like two different hats. Still have the Dad hat when we go home, but when we're at the racetrack it's all professional and it's been a lot of fun to be part of this with him."

Palou, meanwhile, drove a smooth and steady race for a second-place finish to widen his lead in the IndyCar standings from 25 points to 35 points over Pato O'Ward headed into next week's finale. The 24-year-old Spaniard needed the breathing room because he's never before seen the street course in Long Beach where the title will be decided.

Palou must only finish 11th next Sunday to win the title in his second IndyCar season.

Grosjean put on a spectacular show late in the race when he picked his way through traffic on the 11-turn, 2.258-mile course. The Frenchman made a race-high 27 passes and appeared to have a shot to potentially catch the leaders until he struggled to get past the lapped car of Jimmie Johnson.

Johnson was told over his radio to make Grosjean work for the position to protect his Chip Ganassi Racing teammate Palou. Grosjean, in his first season from Formula One, and Johnson, his first year after seven NASCAR championships, banged cars through the turn as both drivers refused to relent.

Johnson briefly went off course but recovered, while Grosjean cleared him and set his sights on finishing higher than third. He couldn't make up any more ground, though, but was thrilled with his third podium of the season.

"Laguna Seca, I love you, that's all I can say," said Grosjean, who apologized for racing Johnson off course and took responsibility for the incident.

Grosjean took a long swig of champagne during the podium celebration then joined Herta and Palou in spraying the rest of the bottle. As the ceremony wound down, the crowd began chanting "Grosjean! Grosjean! Grosjean!" and he returned to the front of the stage to initially wave and then cover his heart in appreciation.

"I almost cried and I don't cry very often," said Grosjean, who called the acceptance from fans this season "more than anything I could have imagined."

Johnson, meanwhile, had his best IndyCar race of the season. He finished 17th -- his previous best finish was 19th -- but made some quality passes with four-time Indianapolis 500 winner Helio Castroneves among those he chased down. Johnson also posted comparable lap times.

O'Ward did all he could and ran third behind Palou for much of the race, but he struggled on his black tires and settled for fifth.

"All weekend we didn't have it and I truly feel like we absolutely used every ounce of pace," O'Ward said. "At the end of the race, that was as much as I had. All we can do is win Long Beach and let the chips fall. Let's see what we can pull off."

The victory by Herta gave Honda its 10th manufacturer's championship, fourth in a row, and came on the 25th anniversary of its first title -- also clinched at Laguna Seca.

IndyCar concludes its season next Sunday on the temporary street course through downtown Long Beach. The race was canceled last year at the start of the pandemic and moved from April to the finale this year to ensure IndyCar could make the stop.

Those final two races are next month at Mid-Ohio Sports Car Course, where Kirkwood already won twice this season. He's been locked into an intense battle with David Malukas all season and the rivals came to Laguna Seca tied with seven wins each.

Now Kirkwood has nine wins and moved a step closer to sweeping the Road to Indy ladder system. The Andretti Autosport driver won the USF2000 championship in 2018 and the Indy Pro 2000 championship in 2019. Kirkwood has 30 wins in 48 Road to Indy starts and the Indy Lights title would earn him a $1.3 million scholarship good for at least three IndyCar races, including the Indianapolis 500.