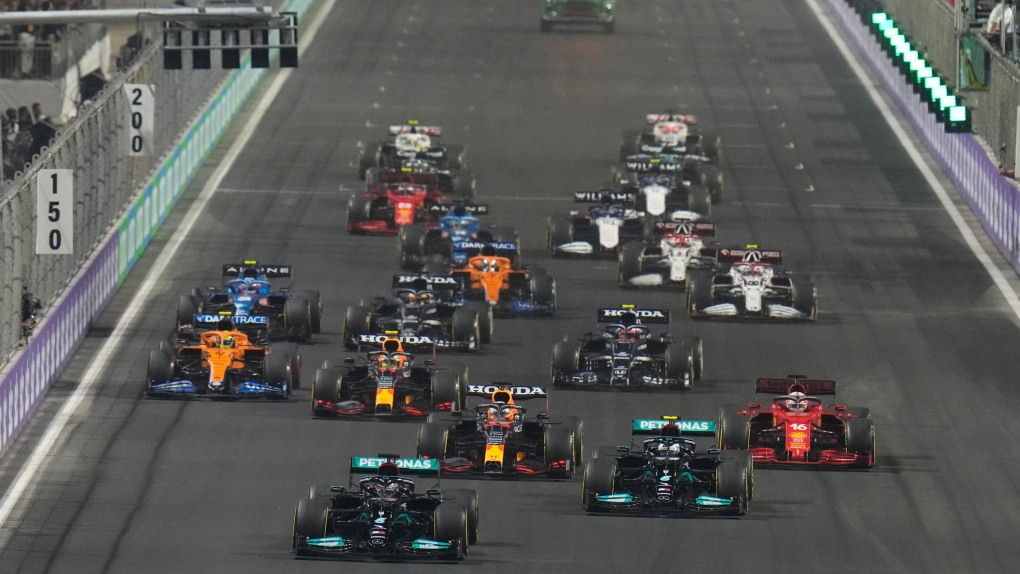 The race on the street circuit under the lights on the 30-kilometre coastal resort area in Jeddah will go down as one of the more memorable events of the season -- if not the last several years. The event saw three standing starts, a pair of restarts, multiple safety cars, and an intense back-and-forth between the title contenders including a minor late collision.

Red Bull was allowed to negotiate a penalty for Verstappen, Mercedes head Toto Wolff slammed his headset in rage, and Hamilton drove into the back of his title rival before ultimately passing Verstappen for the win.

Verstappen was dejected after finishing second and incredulous over the bizarre debut race in Saudi Arabia.

"What happened today is unbelievable," he said. "I'm just trying to race. This sport is more about penalties than racing. So for me this is not Formula One but at least the fans enjoyed it."

The Mercedes camp, even with the victory, was just as baffled.

"Lewis, that has got to be the craziest race I can remember," Hamilton's engineer radioed after he crossed the finish line.

Hamilton needed a few moments to recover after climbing from his car after one of the most draining of his 103 career wins in the heat and humidity of the Middle East.

Looking exhausted, Hamilton sat on a chair next to his physical trainer, with his face buried into a towel as he waited for the podium ceremony.

"I've been racing a long time but that was incredibly tough," said Hamilton, who will be 37 next season. "I tried to be as sensible and as tough as I could be. With all my race experience over the years, just keeping the car on the track and staying clean, that was difficult. We persevered as a team."

Verstappen was penalized for going off course on the second restart, was later told to yield position to Hamilton, but Hamilton ran into the back of his Red Bull to damage the front wing on his Mercedes. The two differed on what happened, and Verstappen was summoned before the stewards post-race.

"I didn't understand why all of a sudden he hit the brakes quite heavily then I moved into the back of him," said Hamilton, who wasn't told by Mercedes that Verstappen was going to let him by for the lead.

Hamilton also used an expletive in describing Verstappen as "crazy" and then called his rival's driving "dangerous."

Verstappen said it was Hamilton's own fault.

"I slowed down, I wanted to let him by. He didn't want to overtake and then we touched," Verstappen said. "I don't really understand what happened there."

Wolff explained after that the team had not informed Hamilton in time that Verstappen was letting him through. Wolff has overseen seven straight drivers' and constructors' championships and is closing in on No. 8.

Once the seven-time world champion passed Verstappen for good, Hamilton controlled the finish and won for the third consecutive race. The British driver has eight wins on the season and has now pulled into a tie on points with Verstappen in the standings. Verstappen still leads the championship on most wins, 9-8.

The championship will be decided next Sunday in the finale in Abu Dhabi.

"It will be decided there," said Verstappen. "Hopefully we'll have a good weekend."

Hamilton is the four-time defending F1 champion and seeking an eighth title to break the all-time record he shares with Michael Schumacher. The 24-year-old Verstappen is seeking his first championship and had dominated the season for Red Bull until this late three-race charge by Mercedes and Hamilton.

"I don't think this is yet done. The result at the end, winning the race, I think he (Hamilton) deserved it," said Wolff. "We could have been out a few times with a broken front wing. I don't want to have dirty laundry out here, but that was spectacular, but not a very good race."

Valtteri Bottas finished third on the home stretch to put both Mercedes drivers on the podium. Esteban Ocon of Alpine was fourth and followed by Daniel Ricciardo of McLaren.

Sebastian Vettel, Sergio Perez, Nikita Mazepin, George Russell and Mick Schumacher all failed to finish because of the messy restarts and the blind turns on the second-longest circuit on the calendar. It spans 6.2 kilometres with 27 corners and was only completed days ahead of the F1 debut in the country.