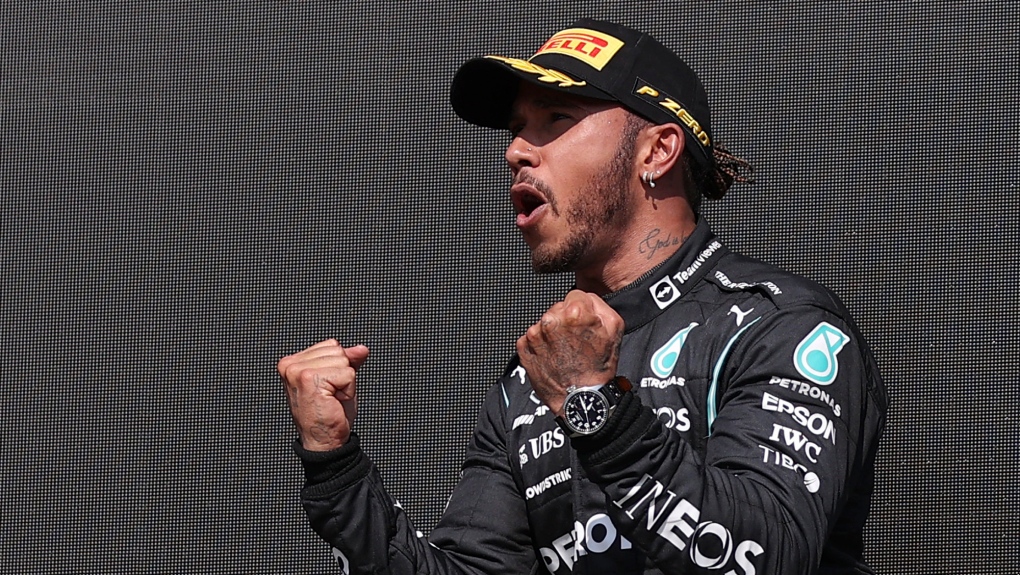 Mercedes driver Lewis Hamilton of Britain celebrates on the podium after winning the British Formula One Grand Prix, at the Silverstone circuit, in Silverstone, England, Sunday, July 18, 2021. (Lars Baron/Pool photo via AP)

BRACKLEY, ENGLAND -- Lewis Hamilton launched a charitable foundation Tuesday that will both support diversity and inclusion in motorsports and empower underrepresented youth groups in Britain.

The seven-time Formula One champion formed Mission 44 with a personal pledge of 20 million pounds (US$27.5 million) earmarked to support programs and organizations that narrow the gap in employment and education systems.

Additionally, Hamilton partnered with his Mercedes team on the "Ignite" initiative to focus on ensuring better representation of "diverse students studying STEM and engineering, as well as wider parts of the industry." Ignite will work closely with Mission 44.

The initiatives stemmed from findings of The Hamilton Commission, which was formed to increase representation of Black people in British motorsports. The commission earlier this month published its first report that included 10 recommendations for change.

"Diverse workforces are not only more successful but are also the morally correct approach for any industry," Hamilton said. "The findings of The Hamilton Commission have provided us a fantastic base to begin our work, and I am confident that Ignite will result in real, tangible change within motorsport.

"For 15 years, I have remained one of the few Black employees within Formula 1, and I am proud that my work with Mercedes is going to change that for the better."

Ignite will focus its work on developing a pipeline of diverse talent in motorsports.

Mercedes team principal Toto Wolff said the organization had vowed to partner with Hamilton at the start of the year on a joint project and the mission statement was a collaboration between driver and team.

"Opening up motorsport and becoming a more diverse and inclusive team are fundamental to our team's values and, with the full support of Mercedes-Benz, we are committed to making a positive impact on society and building a platform from which future generations can access and enjoy our fantastic sport," Wolff said. "Through these platforms we hope to see much more talent from under-represented groups both join our team and take up careers in the wider motorsport industry."

Hamilton has taken a visible and vocal role in issues of racial equality and social justice. He is the only Black driver in F1.