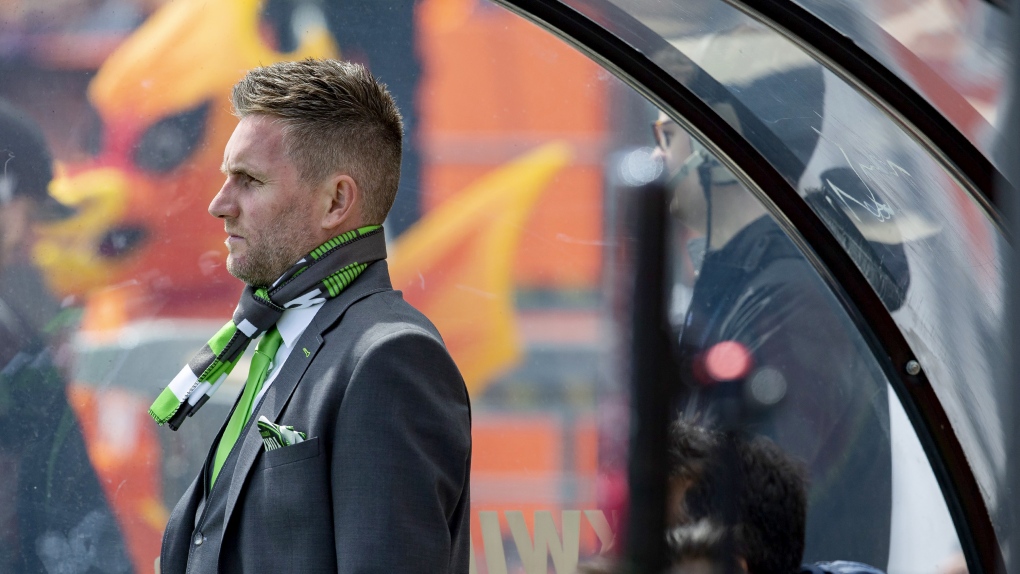 Jim Brennan, Toronto FC's first-ever signing and captain, has fond memories of the MLS club. But he's looking to take it down this week.

Now head coach and technical director of York United FC, Brennan will be on the visitors' bench at BMO Field on Wednesday when his Canadian Premier League team takes on TFC in the Canadian championship quarterfinal. Toronto, languishing in the MLS basement at 4-15-6, has targeted the domestic cup competition, seeing it as a way to get something out of a nightmarish campaign.

Brennan is all too aware of that. And Monday, he happily noted that the pressure was all on the MLS side.

"For our players now, there's no pressure on them going into this game," he said. "I want them to go out there and enjoy the occasion, play with freedom. The pressure's going to be all on TFC. They're at home. They're the big guys in the country."

Still, he expects TFC to come out hard, given its need for success in something this season.

"They need this for their season now. This is what they've got left ΓÇª They're going to be coming at us and it definitely won't be an easy match at all. I expect them to come out guns ablazing."

The game is one of three Canadian Championship quarterfinals Wednesday.

The Toronto-York winner will face either Cavalry FC or Pacific FC, who meet at ATCO Field.

Toronto has won the Canadian Championship seven times, most recently in 2018 when it hoisted the Voyageurs Cup for the third straight year. Montreal is the defending champion.

Brennan won the tournament four times with Toronto FC. In 2009, as a player he helped Toronto to a 6-1 win in Montreal in the final game of the tournament, then a round-robin affair, taking the title on goal difference over Vancouver.

He also won it as an assistant GM and assistant coach.

"It's a great competition and obviously it's getting bigger and bigger every year and even more hard to win," said Brennan. "For these young guys, getting their first taste of the Canadian Championship, it's a great opportunity. And look you never know what's going to happen on any given day."

Pacific FC has already shown that, knocking out the Vancouver Whitecaps by a 4-3 score in the preliminary round.

Brennan, a feisty fullback/winger as a player, made 84 appearances for TFC before moving upstairs to the front office in April 2010. He says he's looking forward to returning to BMO Field.

"It's not so much for me but watching our players perform on a big stage, a fantastic ground, and against a good team," he explained. "So that's what I'm really looking forward to, is seeing how our players embrace the occasion."

He says the key thing for his squad is to control their emotions and not let the moment get to them.

Brennan noted many of his players grew up in the Toronto area supporting TFC. York winger Michael Petrasso was once a member of the TFC academy.

But Brennan played down the Toronto derby angle.

"I'm a firm believer (that) derbies take a while to develop. This is our first game against them."

Brennan, now 44, left his Newmarket, Ont., home as a teenager to pursue his soccer career.

His original destination was Glasgow Celtic but the manager got fired on the eve of his arrival, ending the Scottish powerhouse's interest. Brennan found himself headed to Bristol City instead, kicking off a distinguished pro career that also took him to Nottingham Forest, Huddersfield Town, Norwich City, Southampton and finally Toronto FC.

A member of the Canada Soccer Hall of Fame, Brennan won 49 caps for Canada and was a member of its winning Gold Cup squad in 2000.

This report by The Canadian Press was first published Sept. 20, 2021

A small, angular rock that one Canadian physicist says looks like a chunk of black cheese has the potential to help scientists understand how the early solar system formed.