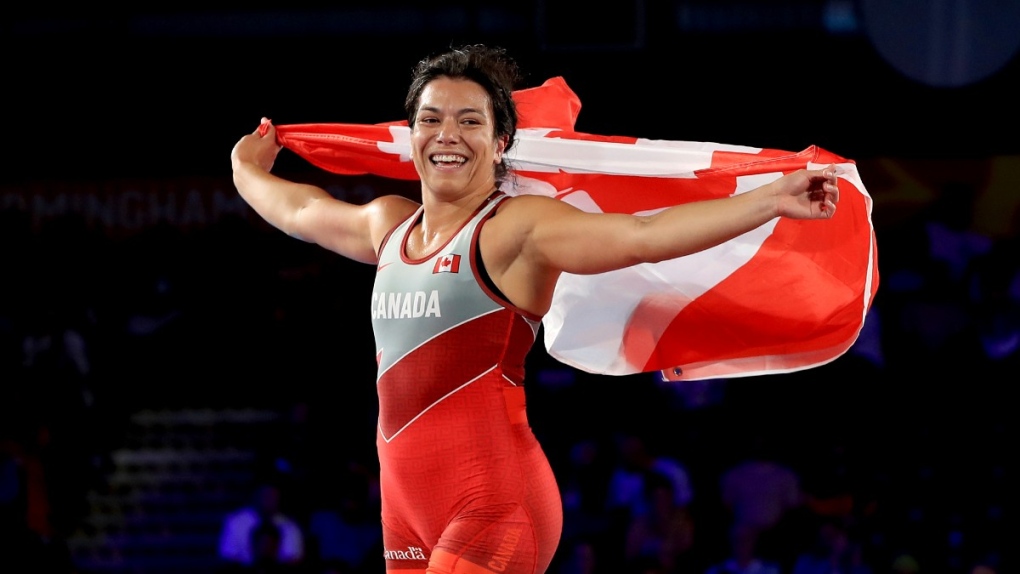 All six wrestlers competing Saturday in Birmingham's Coventry Arena stepped onto the podium.

Di Stasio, a 29-year-old from Burnaby, B.C., beat Nigeria's Hannah Amuchechi Rueben 4-2 in the final with a four-point takedown to win the women's 76-kilogram division

"She was very strong, but when I pulled her down the first two times, I could feel her pulling up," Di Stasio explained. "She was strong enough to pull up, so I let her, so I could sneak in.

"But I had to be patient because if I missed, I knew she'd know it was coming."

Di Stasio won a world title in the 72-kg division in 2018 in Budapest, Hungary, as well as Pan American Games silver in Toronto in 2015.

"We had a game plan," the Canadian said Saturday. "Sometimes I abandon the game plan but in that match, I heard my coach saying something and I listened to it and I was able to do it, so that was very good."

Randhawa of Abbotsford, B.C., outscored South Africa's Nicolaas de Lange 6-1 in the back half of their final match for a decisive 9-3 victory.

"As the match went on, I think I picked up the pace a little bit," said the 24-year-old Randhawa. "Feels amazing. It's been a long road and had a couple injuries along the way.

"We're ending off strong. Hopefully we can keep this momentum going into the senior world championship in Serbia."

Darthe Capellan of Surrey, B.C., and Jasmit Phulka of Abbotsford, B.C., took bronze medals in the men's 57- and 74-kg divisions.

Canada ranked third in the overall medal count Saturday with 84 medals, including 22 gold, behind leader Australia with 154 medals and 54 gold, and host England with 146 and 50 respectively.

At the track, Rogers was the only woman to throw over 70 metres with a winning toss of 74.08 in the third round. Canadian teammate Jillian Weir of Kingston, Ont., took bronze.

"Now I'm even more pumped up to come back in four years."

The rhythmic gymnastics team wrapped their competition with four medals Saturday. Carmel Kallemaa led the way with silver in clubs and bronze in both hoop and ribbon.

The 24-year-old from Thornhill, Ont., compiled four medals in Birmingham, including gold in the team event.

"It was just my dream to make it to this competition," Kallemaa said.

"At first I didn't even dream about finals. I was just thinking I wanted to make it there. I made it there and was hoping to at least make one final.

"To make three finals and one medal in each event, it's just unbelievable. It's one of the best days of my life so far for sure."

A day after winning the women's one-metre springboard, diver Mia Vallee of Kirkland, Que., added to her medal tally with bronze in synchronized springboard with Saskatoon's Margo Erlam.

Vallee, a silver medallist in three-metre springboard in this year's world championship in Budapest, competes in that event Sunday.

The Canadians will face Australia's Taliqua Clancy and Mariafe Artacho del Solar for the title.

This report by The Canadian Press was first published Aug. 6, 2022.