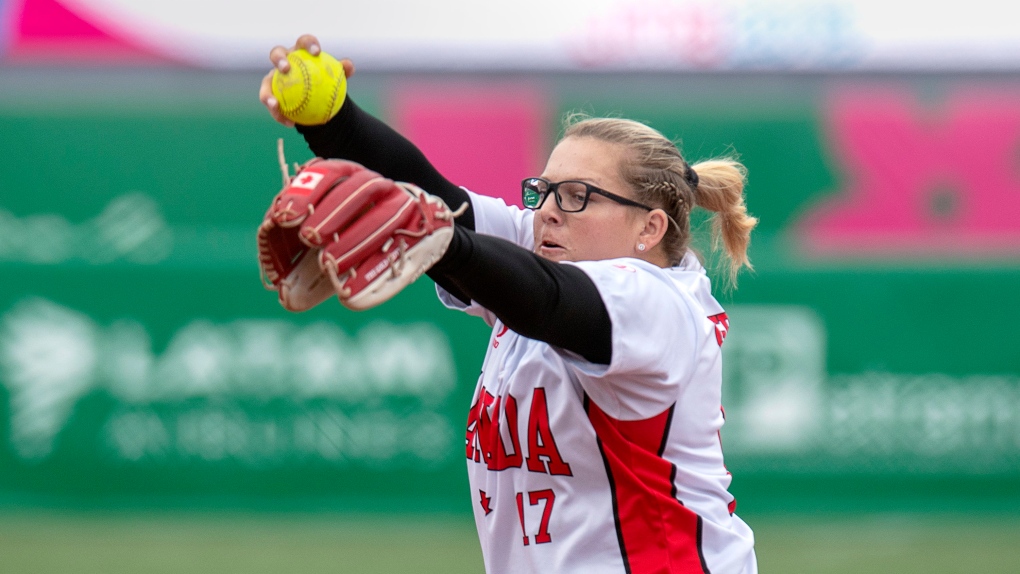 Canada's Sara Groenewegen pitches relief as they play Mexico in preliminary round softball at the Pan Am Games in Lima, Peru on Thursday, Aug. 8, 2019. Canada won 4-0. THE CANADIAN PRESS/Andrew Vaughan

LIMA, Peru -- Sara Groenewegen has limited memory from her unexpected health ordeal just over a year ago. It's probably for the best as the jarring details are hard to get her head around.

The Canadian softball pitcher spent about 10 days in a medically induced coma last summer after contracting Legionnaires' Disease, a severe form of pneumonia.

She can remember the pain and confusion that followed. She also recalls doctors and family members trying to explain what happened to her.

At the time, Groenewegen couldn't put weight on her legs, couldn't see properly and felt dazed. She had no idea that her father was told that her chances of survival were about three per cent.

"I didn't even know about the three per cent thing until fairly recently," Groenewegen said Thursday. "My parents obviously didn't want to tell me that when I woke up. I had been through so much in that short amount of time.

"It's something that you don't even imagine happening to someone, let alone yourself."

Groenewegen can smile at the craziness of it all now that she has recovered. She returned to the national team this season and is aiming to get back to the top of the podium this week at the Pan Am Games.

The White Rock, B.C., native is comfortable talking about her story although it's clear the emotions still hover near the surface.

Seated in a media tent at Villa Maria del Triunfo after a 4-0 preliminary round win over Mexico, Groenewegen still seems a little stunned at what transpired in July and early August 2018.

The 24-year-old right-hander was in Surrey, B.C., with her team at the Canada Cup, a key warmup ahead of that season's world championship.

A Type 1 diabetic, Groenewegen was dealing with a broken insulin pump so her blood sugar levels were running both high and low.

She initially chalked up her feelings of nausea to that. But when a high fever developed and back pain came on, Groenewegen and her trainer went to a nearby emergency room.

She remembers little after arriving at the hospital. Her family later filled her in on the rest.

Groenewegen said she was first diagnosed with a bladder infection and given antibiotics, but concerns were later heightened due to coughing fits and breathing difficulties.

Doctors put her into a medically-induced coma and discovered she had contracted Legionnaires' Disease. Groenewegen had to be transferred to a hospital in nearby New Westminster, B.C.

"My lungs weren't working so I had to be put under to help my body breathe," she said. "I was on full-on life support."

Groenewegen has a one-inch scar on her neck from where an ECMO (extracorporeal membrane oxygenation) machine tube was connected to help blood circulate.

Doctors were able to make progress and just over a week later, started disconnecting tubes and slowly weaning her off some medication.

"Once they found out what it was, it was a lot easier to take control," she said. "But there were a few days where my chances were very, very slim."

Groenewegen recalls feeling confused and disoriented when she thinks back to her first memory after the ordeal.

"This is going to sound so morbid," she said. "But in my coma, I woke up thinking my Dad had passed away because of the hallucinations and the dreams that I had. The first person that I saw when I was coherent was my Dad. I was like, 'Hey, how are you? Nice to see you. I didn't think you were here.' It was crazy.

"I literally woke up thinking that so many things happened to me and they didn't. But then again, you wake up and you're still all over the place. I had 10 lines in me full of medication so I wasn't really 100 per cent there when I woke up."

Mentally, she started feeling more like herself a couple days later. The physical side would take more time.

Sitting up in bed eventually progressed to standing on the floor. A couple steps were soon taken, followed by 10 steps the next day.

Groenewegen was walking by late August and began light training a month later. She lost 15 pounds of muscle and didn't pick up a softball until November.

By January, Groenewegen was feeling like herself again and could participate at a team training camp.

Her season resumed last June and she was named to the Pan Am roster a few weeks later.

Groenewegen has been in top form in Lima, throwing a perfect game last Monday in an 8-0 rout of Venezuela and adding two shutout relief innings in Thursday's 4-0 win over Mexico.

She's unsure where she contracted Legionnaires' Disease -- she had been in California and Japan a short time before returning to B.C. -- and it was difficult to tell when symptoms started.

"There's no concrete answer as to where I developed it and I think that's what bothers me the most," she said. "It's just like, 'Why me?' But shit happens, right? That's life. You never know what's going to happen.

"I'm just grateful that health team knew what to do with me."

Groenewegen is also thankful the ordeal occurred so close to home. Family members and friends were able to provide support.

From time to time, Groenewegen will think back to where she was a year ago. She'll take a deep breath and collect her thoughts on what has been a remarkable journey.

"I have them more in training, not necessarily playing," she said. "I'll be sitting on the bench and I'm like, 'Dang.' Just take in the moment to realize where I am and where I came from."