Canada short of Olympic relay podium in the pool 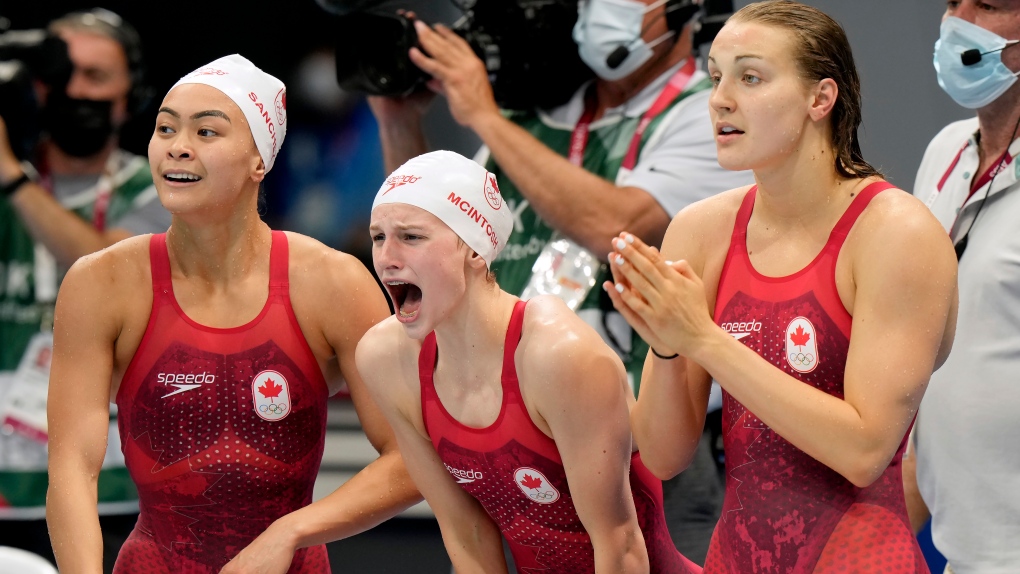 TOKYO -- The fastest freestyle relay ever swum by Canadian women in the 4x200 fell just short of producing a seventh Olympic medal for Penny Oleksiak and a first for 14-year-old Summer McIntosh.

Few countries in the world have the women's freestyle depth to post four fast 200-metre times.

Canada's national record of 7:43.77 seconds Thursday was two and a half seconds off the podium, while fifth-place Russia was more than 10 seconds out.

"I think we're definitely disappointed we missed the podium, but we knew it was going to be a tough race," Oleksiak said.

"We all swam the best we could so that's all you can really ask for. You can't be disappointed with a Canadian record."

Swimming Canada made wholesale changes to the relay lineup for the final.

A bronze in Rio in 2016 is Canada's only medal since the race was introduced to the Olympic swimming menu in 1996.

The women in Thursday's final were faster than the foursome that took bronze at the 2019 world championship.

"The 200 free is hard," Sanchez said. "You have to be a really tough person mentally and physically to do a 200 free. We took seven people to get this four-by-two to where it is. I'm just really proud of everyone.

"It's not where we wanted to be at the end of the day. It'll push us for the next Olympics to stand our ground."

An hour and a half before the relay, Oleksiak swam the fifth-fastest semifinal time in the 100-metre freestyle to advance to Friday morning's final (Thursday evening in Canada). The 21-year-old won the event five years ago in Rio.

"Not as easy as it was when I as 16," Oleksiak said. "I've definitely got a bit more lactic acid."

Sanchez, 20, had qualified for the 100 free semifinal, but dropped out to save herself for the relay.

Oleksiak, Sanchez and Smith earned 4x100 freestyle silver with Maggie Mac Neil on the first day of finals in Tokyo.

With her bronze medal in the individual 200 freestyle, Oleksiak was a medal away from becoming Canada's most decorated Olympian of all time with two events remaining -- the 100 free and Sunday's medley relay.

With a gold, two silver and three bronze medals, Oleksiak was tied with speedskater Cindy Klassen and speedskater-cyclist Clara Hughes for overall Olympic medals at six.

McIntosh is just getting started. The youngest member of Canada's Olympic team contended for medals against the world's top swimmers in her Olympic debut.

The teenager flirted with the podium in the 400 freestyle before finishing fourth. McIntosh was ninth in the 200, which was a distance she'd beaten Oleksiak in at June's trials. She was 11th in the 800 heats Thursday and didn't advance.

Canada was third after her leadoff leg Thursday. Sanchez called McIntosh's split of 1:55.74, which set a Canadian age-group record, "insane" for a 14-year-old.

McIntosh's navigation of her first Olympic Games bodes well for her swimming career.

"They've definitely shown me how cool it is to be an Olympian and it just means so much to me," McIntosh said. "To be able to have this opportunity to represent my country for the first time, is truly the coolest feeling in the world."

Winnipeg's Kelsey Wog was eighth in her semifinal heat of the women's 200-metre breaststroke and later disqualified for a dolphin kick at the wall instead of a whip kick.

The mixed medley relay made its Olympic debut Thursday. Savard, Smith, Toronto's Javier Acevedo and Gabe Mastromatteo of Kenora, Ont., were fifth in their heat and didn't advance.