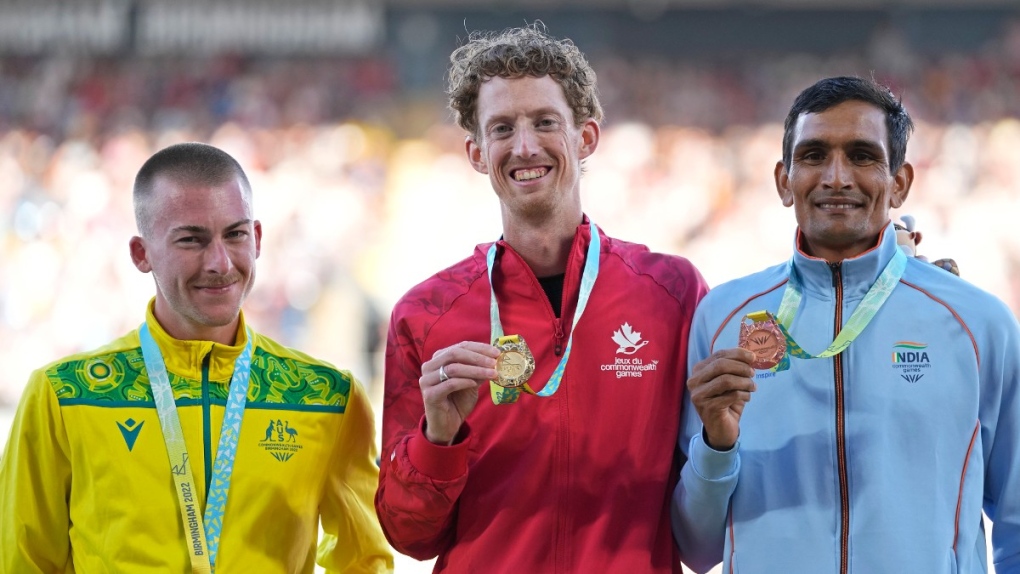 Silver medalist Declan Tingay of Australia, gold medalist Evan Dunfee of Canada and bronze medalist Sandeep Kumar of India, from left to right, pose with their medals on the podium of the Men's 10,000-metre race walk during the athletics competition in the Alexander Stadium at the Commonwealth Games in Birmingham, England, Aug. 7, 2022. (AP Photo/Alastair Grant)
BIRMINGHAM, United Kingdom -

Canada's Evan Dunfee says he drew on the support of his loved ones to propel him to a Commonwealth Games gold medal.

The 31-year-old from Richmond, B.C., won the 10,000 metres on Sunday, using a fabulous kick over the final lap to open a 40-metre gap on his nearest competitor.

"To believe in myself today as much as my friends and family back home believed in me, that was the goal for today, to just come in here and have that same belief as everyone else has in me, and back myself," said Dunfee, who made his third Commonwealth appearance. "And that's what I did and I'm thrilled."

Canada's 4x400-metre relay of Natassha McDonald, Aiyanna Stiverne, Micha Powell and Kyra Constantine raced to gold. After a thrilling neck-and-neck finish with England, the English were disqualified for a lane violation.

With one day left of competition, Canada was third on the overall medal table with 91 -- 26 gold, 31 silver and 34 bronze. Australia has the lead with 174 medals, while England has 166.

Dunfee's victory, meanwhile, came after a tough season that saw him struggle with a nagging hamstring injury and lack of motivation largely around the elimination of the 50-kilometre event, in which he won bronze at both last summer's Toky Olympics and the 2019 world championships. Dunfee had lobbied fiercely to keep the event, but it was eventually scrapped from the world and Olympic programs.

Sunday's race was a huge change of pace for Dunfee, since it was held on the track inside Alexander Stadium. Race walkers normally compete on road courses.

"That was amazing, to come out here, be in the stadium, we've never experienced anything like this as race walkers," he said.

The 4x400 relay was an ideal ending to the track and field competition. Constantine ran a sizzling anchor leg, getting the baton in third place before crossing the finish line in a photo finish with England. The English initially celebrated the win before they were disqualified.

"Everybody did their part really well," said Constantine, a Toronto native. "I got the baton in a really good position and all that was left for me to do is to fight, I guess. I'm proud, I'm happy."

Thibeault, meanwhile, was dispatched in the quarterfinals at the Tokyo Olympics, but bounced back to win the world championships in May.

"It's more than just the Commonwealth Games, it's been a really long and challenging year, full of great moments ... and I'm just so proud of not only what I've accomplished, but also what my team has accomplished," Thibeault said. "We've been through some rough patches, and we just keep becoming more and more resilient and we just walk out of these tournaments better than we came in."

Thibeault, 25, controlled the bout virtually from the beginning, and credited the hard work in the gym with national team coach Samir El Mais.

"Today everybody got to see the work that we put in," she said. "These are the big moments. People see these moments. They don't see the small moments in the gym, and that's what makes this happen."

Pavan and Humana-Paredes, the 2018 Commonwealth champions, beat Mariafe Artacho del Solar and Taliqua Clancy of Australia 2-1 in a gold-medal thriller.

"To win a second Commonwealth gold medal, it's a great feeling, and it was a much better performance on our side than (Saturday's semifinal)," said Pavan, from Kitchener, Ont. "So, it's nice to end like this. It's nice to walk away with a gold medal for Canada and this has been just an incredible experience."

"Oh my gosh, to be able to defend a title is one of the most challenging things to do," added Toronto's Humana-Paredes. "This holds a lot of weight because it's been four years since our last one and a lot can change in that, and a lot of teams have improved since then. And so the fact that we can produce another gold-medal performance, it's rare and so it's really special. This holds a lot of meaning."

They planned to celebrate with beer and pizza Sunday night.