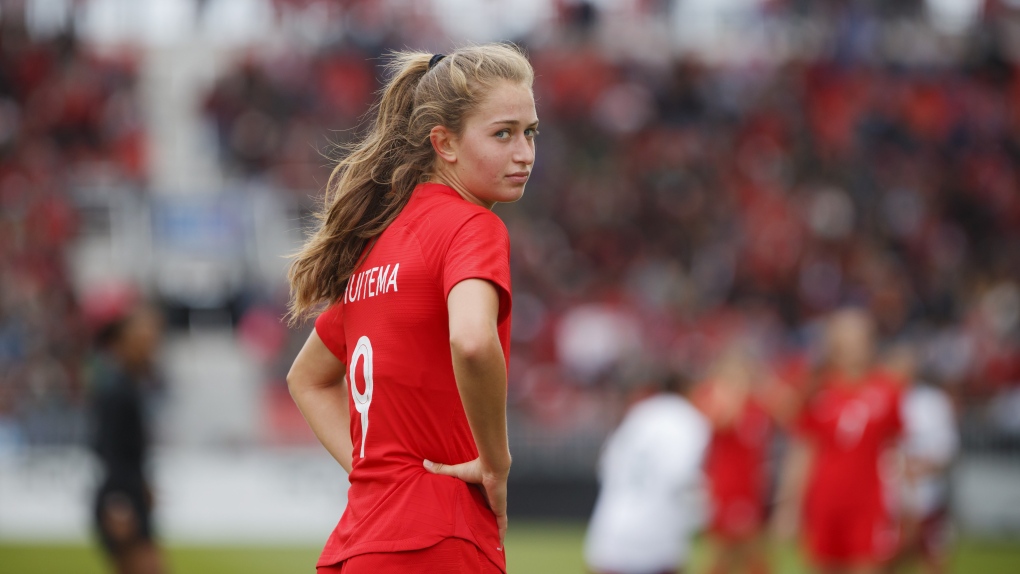 Canada's forward Jordyn Huitema (9) is seen during the second half of a women's international soccer friendly against Mexico at BMO Field in Toronto, Saturday, May 18, 2019. THE CANADIAN PRESS/Cole Burston
MEXICO CITY -

A spirited comeback attempt fell just short as the Canadian women's soccer team saw its five-game winning streak ended with a 2-1 loss to Mexico on Saturday.

Second-half substitution Jordyn Huitema scored in the 86th minute to give the Olympic champions life, but Mexico held on and weathered a number of excellent Canadian chances to beat Canada for just the second time.

"I thought first half, you could see we tried a new system and new faces," Canada head coach Bev Priestman said. "It was clunky, but I loved our response in the second half. It's the Canada I know that will take it to the opposition."

Mexico opened the scoring on a penalty in the 19th minute when striker Stephany Mayor calmly struck the ball into the right of the Canadian goal as goalkeeper Kailen Sheridan dived the other way.

The penalty was awarded after Canadian defender Vanessa Gilles got tangled up with Mexico's Diana Garcia, and Garcia went down in the penalty area.

Mexico made it 2-0 in the 76th minute when a free kick bounced off the crossbar right to unmarked striker Alicia Cervantes, who directed the ball past a prone Sheridan.

Huitema cut Mexico's lead to 2-1 with a clinical finish inside the box in the 86th minute.

"Everyone who came in in the second half was just trying to bring some energy and some flow into the game," Huitema said. "I think we were on top of them for a lot of the second half."

Canada had a glorious chance to draw level in the 88th minute, but Cloe Lacasse's shot off a nice cross from Deanne Rose went over the bar.

Lacasse was brought down in the penalty area in the sixth minute of added time, but the referee waved play on.

"Calls didn't go our way, there was some poor decisions," Priestman said. "But at the same time we've got to take a game into our hands where decisions made left or right doesn't impact the game because we've been so dominant."

Saturday's match was played behind closed doors at a high-performance training facility. Sixth-ranked Canada and No. 28 Mexico meet again Tuesday at Estadio Azulgrana.

Canada saw an end to its 12-game unbeaten run (8-0-4 including two penalty shootout wins at the Olympics) dating back to a 2-0 loss to Brazil on Feb. 24 at the SheBelieves Cup in Orlando.

Canada is 9-3-4 this year, with the other loss also at the Orlando tournament -- a 1-0 defeat at the hands of the top-ranked U.S. that was later avenged at the Tokyo Olympics.

Canada had won five straight against Mexico and was unbeaten in their last 14 meetings (12-0-2). Its overall record against the Mexican women is 22-2-2.

Saturday's loss was not as costly as Canada's other loss to Mexico. A 2-1 defeat in March 2004 in a CONCACAF semifinal in San Jose, Costa Rica, denied Canada a berth at the 2004 Olympics in Athens.

This was Canada's third match since its Tokyo Olympic triumph. Canada defeated No. 23 New Zealand twice last month -- 5-1 in Ottawa and 1-0 in Montreal -- to kick off what was dubbed a "Celebration Tour."

This report by The Canadian Press was first published Nov. 27, 2021.