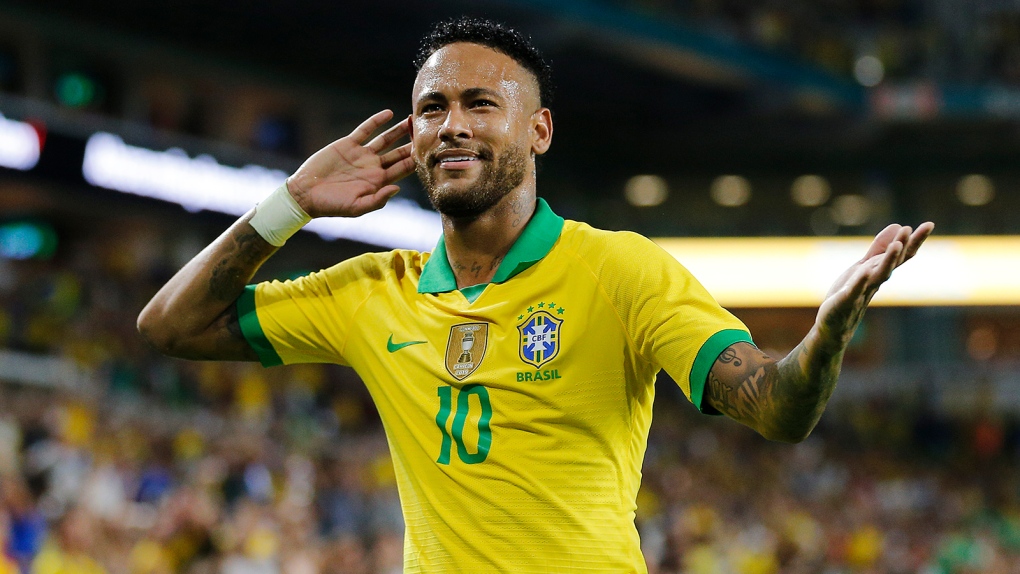 Later this year, Neymar Jr., pictured here in Miami in 2019, is looking to lead Brazil to their first World Cup title in 20 years. (Michael Reaves/Getty Images/CNN)

The Paris Saint-Germain forward and Brazil captain appeared on a TikTok video singing Bolsonaro's campaign jingle in which he lip synchs, "Vote, vote, and press 'confirm' for 22, that's Bolsonaro," in reference to the Brazil president's official ballot number.

The video was also posted to Neymar's personal TikTok account on Thursday.

The video of Bolsonaro touring the institute, which looks to create opportunities through education and sports initiatives for low-income families and children in the city of Praia Grande, was posted on the Institute's official Twitter account.

Although Neymar was not able to host the President in person, he sent him a video message from Paris, where he had just played in a friendly with the Brazilian national team, helping secure a 5-1 victory against Tunisia, which was Brazil's final game ahead of the World Cup in Qatar later this year.

Responding to the criticism he has faced for his support of Bolsonaro, Neymar tweeted on Friday that, "They talk about democracy and a lot of things, but when someone has a different opinion they are attacked by the very people who talk about democracy. Go figure."

The Brazil team's distinctive yellow jersey is a symbol that unites the country through a love of football and national pride, but in recent years the shirt's adoption by right wing supporters of Bolsonaro, who wear it at protests and rallies to show their political allegiance to the Brazilian president has provoked controversy.

Walter Casagrande, a former footballer for the Brazilian national team and the São Paulo club Corinthians, remembers the feeling of scoring a goal while wearing the yellow jersey in his first match with the "Selecao" in 1985.

"It was a magical thing," Casagrande told CNN Sport in 2020, "like an enchanted object that gave me huge emotion.

"Now I consider the Brazilian yellow jersey to have been kidnapped and appropriated by the right wing, so we cannot use it," added Casagrande, whose sentiments lie on the left side of the political chasm.

Casagrande said that for him the power of the yellow shirt used to be that it represented democracy and freedom.

"Brazil is appearing horribly to the world right now," he said two years ago. "It's the first time in my life I'm seeing the yellow jersey being used against democracy and freedom."

Neymar's support for Bolsonaro could be timely given a nationwide opinion poll released on Thursday that says former Brazilian President Luis Inacio Lula da Silva is ahead of the incumbent president by 14 points for the first round of voting in the country's upcoming presidential elections on October 2.

Whoever gets 50% plus one vote would win the election outright without the need for a second-round runoff.

In 2014, on the eve of the presidential first round vote, Neymar recorded a video declaring his support for Aécio Neves of the centrist PSDB party, who was defeated by Dilma Rousseff of the left-wing Worker's Party in the second round.

In 2010, Neymar publicized his meeting with Lula, then president, on his social networks.

"Me and Paulo Henrique Ganso just met the President of the Republic, very cool! It will be marked for the rest of your life!", he wrote at the time.

Neymar's fellow Seleção forward Lucas Moura has also recently come out in support of Bolsonaro saying on the Cara a Tapa podcast: "I don't see any perfect presidential candidate, but I can't deny that Bolsonaro is the guy who comes closest to what I believe."