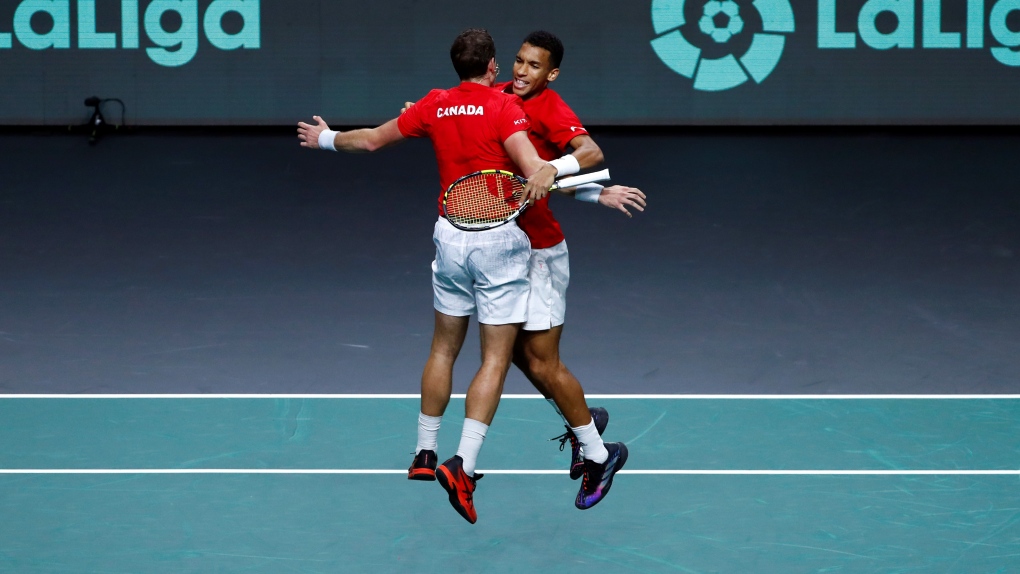 After getting into the final rounds through the back door, Canada is now headed to the Davis Cup championship tie for the second time in the last three tournaments.

Montreal's Felix Auger-Aliassime erased Denis Shapovalov's defeat in the first match of Saturday's semifinal tie against Italy by winning his singles. The world No. 6 then teamed up in doubles with Vasek Pospisil as a late substitution to give Canada a 2-1 victory.

Canada will face Australia on Sunday (7 a.m. ET), with the winning nation taking home the iconic trophy and sharing the winner's prize of US$2.5 million.

"I'm so proud of this team and so proud of the guys, what they have accomplished," captain Frank Dancevic said in the team's post-match conference. "We are going to celebrate a bit tonight, for sure, but we have another match tomorrow. The ultimate goal is to win the Cup, and that's what we are dialled in to do."

Canada lost its qualifying tie against the Netherlands earlier in the year and only advanced to the final rounds as a "lucky loser" after the withdrawal of defending champion Russia from international competition.

The Canadians, led by an in-form Auger-Aliassime, then swept South Korea 3-0 and upset Spain 2-1 in group play to advance to the knockout stage and a quarterfinal match against Germany.

This will be the 11th time Canada and Australia have met in Davis Cup, but only the second time since 1964.

They met nine times between 1914 and 1964 -- with Australia winning every time. Seven of those ties were played in Montreal, and all but one was a 5-0 sweep for Australia in the old five-match, best-of-five-set format.

But Canada won the last one, in the quarterfinals of the 2019 tournament in Madrid en route to an appearance in the final, where the Canadians lost to Spain.

As Auger-Aliassime left the court after his 6-3, 6-4 singles victory over Italian No. 1 Lorenzo Musetti, he said he was ready to play doubles.

He didn't know if he would be needed. But after a 7-6, (4), 6-7 (5), 6-4, three-hour, 15-minute singles loss to Lorenzo Sonego in the day's opening singles, during which he had to have his upper back treated by the Tennis Canada physio, Shapovalov didn't have much left.

He already had played a long three-setter in singles and another in doubles in a win Thursday over Germany to get Canada into the semifinals.

So Dancevic substituted in Auger-Aliassime, fresher and in fine form.

In a more surprising move, Italian captain Filippo Volandri replaced doubles specialist Simone Bolelli, who had teamed with Fabio Fognini to eliminate the Americans in the quarterfinals, with Matteo Berrettini.

Despite being the highest-ranked player on the team, Berrettini was expected to be a cheerleader this week. He hadn't played since mid-October because of a foot injury.

But Volandri alerted him Saturday that an injury to Bolelli meant he might be needed. Berrettini tried to prepare as much as he could, practicing twice.

The celebration was relatively muted, the job still not complete.

"We knew coming into this week that we could make some changes depending on how singles went. And I just felt like the whole team connected around this idea; there was no ego in the wrong places," Auger-Aliassime said. "Everybody just has a clear idea of the main goal, which is lifting the Cup (Sunday)."

Auger-Aliassime proved a dependable, sure thing in singles this week.

He defeated Oscar Otte in two close sets on Thursday in the quarterfinals to even the tie at 1-1 and give Shapovalov and Pospisil an opportunity to win it.

And on Saturday against the talented Musetti, he came through once again.

The 6-3, 6-4 victory took less than 90 minutes. And once again, Auger-Aliassime was dominant on serve.

He won 30-of-33 points with his first serve, and never faced a break point.

Musetti, higher-ranked than Sonego but seven years younger, didn't react as well to the high-stakes situation. The 20-year-old was pressed into service as the No. 1 singles player after both Berrettini and Jannik Sinner had to beg off because of injury.

Against a superb Sonego, Shapovalov could only break once in 13 opportunities. The majority of those were saved by Sonego, not lost by the Canadian.

But Shapovalov hit three double faults in two different games, including in the final game of the marathon match.

It ended with Shapovalov seemingly attempting a serve-volley on a second serve, only for the serve to fall feebly into the bottom of the net.

It was always going to be a tough ask for the 23-year-old from Richmond Hill, Ont, whose ATP Tour season ended with a second-round loss to Pablo Carreno Busta at the Paris Masters back on Nov. 2.

After a quick holiday, he went to Marbella, Spain, and trained for a week to get ready. But it's a challenge to flip the switch back on after a long season.

Shapovalov is hopeful he can put the Canadians ahead 1-0, instead of behind, when he opens play in Sunday's final -- likely against either Thanasi Kokkinakis or Jordan Thompson.

It would be his first meeting against either player. But the final lineup won't be known until an hour before the first match.

"I feel pretty good. I'm going to do everything I can tomorrow to try to win the singles and ease the pressure a little bit for Felix and for the rest of us," Shapovalov said. "I played two tough matches and I have been there in both. I just haven't been able to get the win, but I think I have been playing well. The level is really high. There is a lot of positives."

This report by The Canadian Press was first published Nov. 26, 2022.