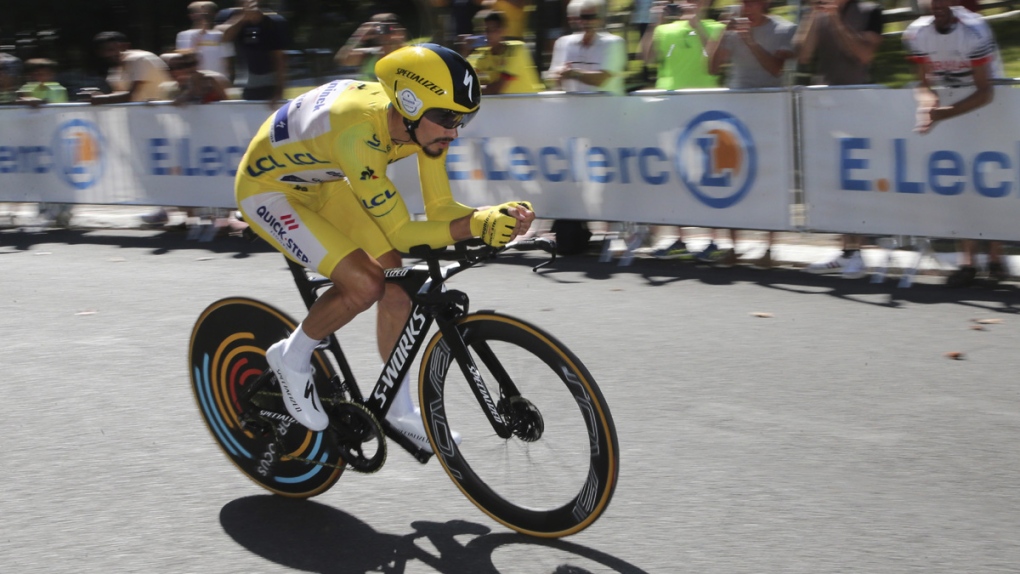 PAU, France -- Inspired by his yellow jersey, Julian Alaphilippe held off defending champion Geraint Thomas to win the only individual time trial stage of this Tour de France on Friday, a shock victory to raise French hopes that he could go all the way in yellow to Paris next week.

Cheered on by boisterous crowds hammering on roadside barriers, Alaphilippe sprang a surprise in his margin of victory on the tricky, hilly, turn-filled loop south of Pau, with spectacular views of the Pyrenees.

Having previously predicted that he'd lose time to Thomas, an expert in the race against the clock, Alaphilippe stunned even himself by emphatically relegating the Welshman into second place, 14 seconds slower.

"It's incredible," Alaphilippe said, adding that his performance reduced members of his team to tears.

"I didn't think I'd win. I was transported by the maillot jaune."

His second stage victory of this Tour -- he also was victorious on Stage 3 -- came 100 years to the day since the jersey was first awarded to a rider, on July 19, 1919, to Frenchman Eugene Christophe.

All eyes turn to the Pyrenees to see whether Alaphilippe can continue his dream race on Saturday ascending the legendary Tourmalet, the first of seven climbs to above 2,000 metres (6,500 feet) in the highest Tour in the race's 116-year history.

Alaphilippe has held the race lead for a total of nine days, wowing French fans crossing fingers and toes for their first homegrown champion since Bernard Hinault in 1985.

He leads Thomas by 1 minute, 26 seconds overall, a sizeable margin that could still melt like the Pyrenees' last snows in the July heat if he wilts on the punishing Tourmalet and, next week, in the Alps.

He furiously sought to downplay the rising expectations after his barnstorming performance in Pau, repeating that he is thinking only "day by day" and stressing that holding his own on steep high mountains and the long uphill finish to the Tourmalet would be a completely different challenge to the 27-kilometre (17-mile) time-trial route.

Thomas was among those stunned by the Frenchman's ride.

"I didn't really expect that," he said. "He's obviously going incredibly well, so he's certainly the favourite and the one to watch."

Given the doping-stained history of cycling and the Tour, Alaphilippe immediately faced a question in his winner's news conference about the believability of his performance, which he batted away, seemingly unruffled.

"If it creates suspicions, that's the way it is," he said. "I'm just riding my bike in the way I like."

Alaphilippe has said he expects to suffer in the high mountains, where the likes of Thomas and specialist climbers are expected to shine. But given how Alaphilippe has continued to confound expectations with his punchy riding and gritty determination to stay in yellow, fewer are predicting he can't ride up the Champs-Elysees in the lead on July 28.

Belgian rider Thomas De Gendt, third on Stage 13 and 36 seconds slower than Alaphilippe, was among those saying he could go all the way.

"He can surprise everybody," De Gendt said.

Behind Thomas and Alaphilippe, there was significant movement in the overall standings among other riders also fighting to get on the podium.

Steven Kruijswijk from the Netherlands, fifth in Paris last year, vaulted to third overall. But his deficit to Alaphilippe grew to 2:12, having been just 1:27 off the lead before the French rider's time-trial tour de force.

Thomas' teammate, Egan Bernal, slipped from third to fifth overall, now 2:52 behind Alaphilippe. Having started the Tour in Belgium as equal co-leader with Bernal on their team, Thomas looks increasingly like the undisputed No. 1 at Ineos, although that, too, could change if he struggles in the mountains.

The no-holds-barred performance from Alaphilippe rewarded him for taking risks on the course that proved too difficult for some other riders.

Belgian Wout van Aert, a Tour rookie who won Stage 10, plowed into a roadside barrier and crashed in a right-hand curve close to the finish. He'd been one of the quickest riders on the course before hitting the deck. Medics treated him at the side of the road and then transported him away by ambulance. His team, Jumbo-Visma, said van Aert was conscious but out of the Tour with a flesh wound on his right upper leg.

Maximilian Schachmann also crashed, with the Tour rookie from Germany grimacing as he rode to the finish with a bloodied right knee.