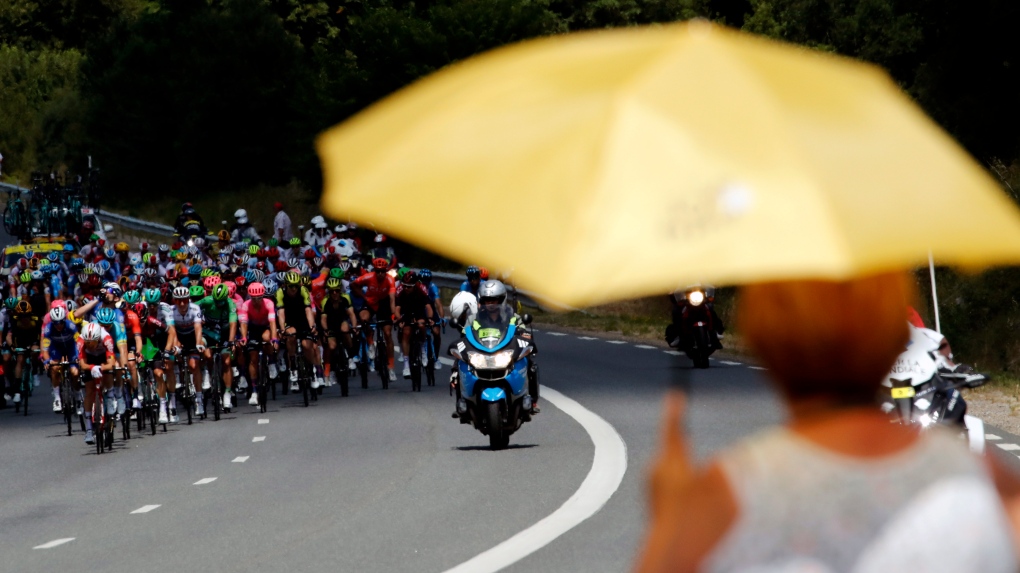 A spectator holds an umbrella along the road as the pack rides during the tenth stage of the Tour de France cycling race over 217 kilometers (135 miles) with start in Saint-Flour and finish in Albi, France, Monday, July 15, 2019. (AP Photo/ Christophe Ena)

ALBI, France -- With all the technology stacked against them, the six breakaway riders at the Tour de France had no hope of making it to the finish without being caught.

Race directors were watching their every move on TV screens set up in their cars, and rival competitors riding behind were informed in instant time of the gap through earpieces. It was a day for a bunch sprint, and it could not be any different.

At the Tour, long gone are the days when bold riders would launch long-range attacks and foil the sprinters at the finish line. The sport has changed so much in the space of 20 years that, on the many long and flat stages peppering the thee-week racing program, breakaways have nearly no chance of succeeding.

"A stage victory in the style of Jacky Durand or Thierry Marie? It's nearly impossible on Grands Tours, and even more at the Tour de France," Arkea Samsic team manager Emmanuel Hubert told The Associated Press.

Hubert, a former pro rider, mentioned Durand and Marie, two riders who epitomized the idea of panache. In the 1980s and '90s, both were capable of launching long-range victorious rides that made them fan favourites.

Such long-haul trips still take place nowadays, but they are almost never rewarded.

Take the six who spent Monday at the front of the pack in the southwestern Aveyron region. If they had any hopes of reaching Albi ahead of the pack, they quickly found out their grand day out would not feature a happy ending.

There were four climbs on the day's program, but the flat finale gave sprinters a golden opportunity to get a stage win. Tony Gallopin, Michael Sch├ñr, Natnael Berhane, Anthony Turgis, Mads Wurtz Schmidt and Odd Christian Eiking moved away from the pack soon after the start. With none of them a threat in the general classification, the peloton was happy to let them go.

But once their lead reached three minutes, the fugitives were kept on a tight leash, with sprinters' teams speeding up the pace at the front of the pack to make sure they would not open a gap too difficult to bridge later in the stage.

A classic scenario then developed. Using all the data available to determine the right time to move, sprinters' teams organized the chase about 50 kilometres from the finish to rein in the audacious group.

"There is so much at stake for the sprinters' team," Cofidis manager Alain Deloeil told the AP. "For them it's nearly a professional mistake if, on a flat stage, they don't bring back the breakaway. They need to set up a sprint for their fast man."

These scenarios, which also affect racing in the mountains, are a real problem for organizers who need to maintain the excitement over a three-week period. At a closed-door meeting before the race started, Tour director Christian Prudhomme urged riders to be more audacious in their strategies after a somewhat boring start to the race last year.

Deloeil and Prudhomme are nostalgic for an era when ear pieces and power meters were words still to be invented. They believe riders don't use their instinct anymore, with their eyes glued to screens determining whether they should attack or chase down fugitives.

Team Ineos, the former Team Sky, often relies on data from power meters -- the small devices fitted to riders' bikes measuring their power output -- when tackling climbs. It's a strategy that produced five Tour victories with three different riders since 2012.

Prudhomme would like to see restrictions on power meters.

"Riders should not have permanent access to their data," Prudhomme told the AP. "In days gone by, Fausto Coppi used to attack Gino Bartali when he noticed the little blue vein coming out on his rival's leg. It was a sign that Bartali was getting tired. And Bernard Hinault waited until Joop Zoetemelk's leg moved aside, because it meant he was tired. And that was the moment Bernard chose to attack."

According to Prudhomme, banning power meters would add a refreshing dose of romanticism to a sport heavily relying on data.

"If riders could not read their power meters, there would be more emotions," he said. "But obviously the biggest teams don't want that."

Stephane Rossetto, a Tour rookie who twice tried his luck over the past 10 days in long unsuccessful breakaways, said many competitors are too conservative in their approach.

"That's modern cycling, and we need to adapt," the 32-year-old said. "Many riders are just looking at their power meter and don't go beyond a certain limit. And with ear pieces, we get the gaps in real time. There is not much room for surprise. Me, I never look at my power meter."

Luke Rowe, a teammate of defending champion Geraint Thomas at Ineos, hit back at Prudhomme's remarks.

"He is living in the Stone Age with comments like that," Rowe said. "I can tell you, from a guy who spends a lot of time riding on the front, you don't ride on power. You ride on feel, you ride on who is in the break, how far ahead they are, on wind direction, terrain. You take all these factors into consideration to see how you are going to ride. You don't stare at power meters."

Boosting Rowe's case, it was the good positioning of Ineos riders at the front of the pack -- and not technology -- that allowed them to gain around 100 seconds on three dangerous rivals when crosswinds played havoc in the finale of Monday stage.

------ John Leicester contributed to this report.